Film: Tristana
Format: Video from The Magic Flashdrive on laptop. 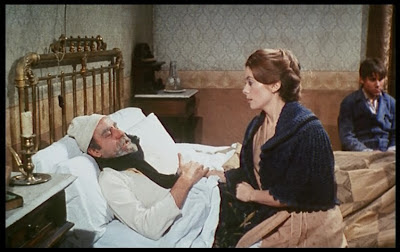 Getting through all of the films by Luis Bunuel on the list has been something of a chore. I’ve admittedly liked a few of them, but several have been noteworthy in their wretchedness, and most just passed over me. I guess what I’m saying is that there’s way too much Bunuel on The List. We can keep Belle de Jour and The Discreet Charm of the Bourgeoisie and maybe Viridiana. The rest can pretty much go scratch, including tonight’s film, Tristana. In the interest of full disclosure, I attempted to watch this last night, but fell hard asleep 30 minutes in and woke up only at the end. This doesn’t really bode well, considering I wasn’t that tired going in.

It’s a tried and true story. A young woman named Tristana (Catherine Deneuve) loses her mother. She is put into the care of a man named Don Lope (Fernando Rey), who has agreed to take care of Tristana. Eventually, though, he realizes that Tristana is a woman and no longer a girl. This distinctly changes their relationship from father/daughter to one much more to husband/wife. Since Don Lope is her guardian, this is creepy to the extreme. This comes more from the relationship itself and less from the vast age difference between the two of them.

Eventually, Tristana has grown up enough to want to have her own life, both internal and external. Despite her personal commitment to and reliance on Don Lope, she begins an affair with a painter named Horacio (Franco Nero) and eventually runs away with him to Toledo. When she falls ill, she leaves Horacio and returns to Don Lope and eventually marries him when he inherits a vast sum of money from his sister. But even this does not engender any loyalty in Tristana, who takes a particular revenge on the man who has both cared for her and kept her as something of an emotional prisoner.

One of the biggest issues I had with this film was the ridiculously, entertainingly bad subtitles on this version. Tristana was one of the “missing” films from The List; it’s now currently available through NetFlix, and the version available there may have vastly improved subtitles, which would significantly improve the film. As bad as the subtitles are (and they’re really comical in places), they are good enough to follow the basic story. Better subtitles would only make things a little easier, avoiding the necessity of mentally retranslating everything that pops up on the screen.

Even with better subtitles, though, I can’t think of a great reason to spend a lot of time with this film. I’ve certainly seen worse films and spent longer watching them, but Tristana is one that doesn’t seem to offer enough to make it memorable. It put me flat out to sleep the first time and washed over me the second time without making much of an impression other than the presence of Catherine Deneuve.

There is additional confusion in the names of two of the characters. There is Saturna (Lola Gaos), the servant of Don Lope. There is also Saturno (Jesus Fernandez), the deaf-mute pseudo-servant brought in from an orphan asylum by Don Lope. With problems with subtitling in full swing, it was a good 45 minutes into the film before I realized that this was not merely a too-frequent typo but references to two different people.

Tristana plays on a common theme—the seduction and corruption of innocence. In this case, Tristana is initially the innocent in question. Eventually, by the end of the film, she has reached the point of the corruptor, particularly in regards to Saturno. In fact, the moment in which Tristana stands on a balcony and exposes herself to Saturno is one of the only memorable moments from the entire film. That’s all well and good, but I have no real idea what Bunuel was attempting to say with this particular story. Okay, innocence gets corrupted. Okay, that’s both a fact of life and distressing. And?

And that’s the issue I have with this film. Beyond the fact that it’s not particularly memorable, it’s also fairly obscure in its meaning, unless that meaning is that corrupting the innocent eventually comes back and forces the guilty party to pay a terrible price. Maybe that’s it, but I’m sort of beyond caring at this point.

Why to watch Tristana: It’s on the list.
Why not to watch: It’s dull and unmemorable.