Watching Oscar: Master and Commander: The Far Side of the World

Film: Master and Commander: The Far Side of the World
Format: DVD from personal collection on laptop. 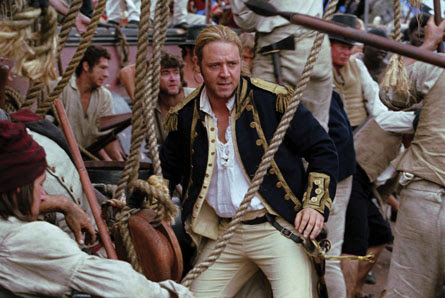 Of all the movies I like a lot, there is none that I’ve gotten more grief for than Peter Weir’s Master and Commander: The Far Side of the World. At least three other bloggers have metaphorically rolled their eyes and groaned when I have brought this up as a great film. I stand by my assertion that this is a film worthy of respect. I like it, perhaps more than I should, but I like it all the same. It’s the sort of film that I never get tired of seeing. Having watched it, I’d happily consent to watch it again immediately.

War movies are a genre I don’t love or hate, but I genuinely love naval warfare films. Many of my favorite films in the military genre are either prison films or naval films. Master and Commander (I’m shortening the title from here on out) takes place in the time of wooden ships and iron men, smack in the middle of the conflict between England and France, when Napoleon was in charge of a good chunk of Europe. With Europe under Bonaparte’s boot, the war became one of naval engagements far from home.

HMS Surprise, captained by Jack Aubrey (Russell Crowe) has been commissioned to track down the French frigate Acheron, which is known to be sailing off the coast of Brazil. The movie opens with the first confrontation between Surprise and Acheron, and Surprise comes off badly, escaping only because of a handy fog bank. During the battle we meet ship’s doctor Stephen Maturin (Paul Bettany). We also learn that this is not going to be a film that pulls a lot of punches. A young (maybe 12 years old) midshipman named Blakeney (Max Pirkis) is wounded and eventually loses his right arm above the elbow.

Essentially the entire film is the chase between the smaller Surprise and the much larger Acheron, which is sailing through South American waters looking for English merchant ships to raid. We get several confrontations between the two ships, although only the first and the final one are actual shooting matches. Each is filled with a great deal of tension, though. The rest of the film is taken up by life at sea and life in the Royal Navy for the most part, the personalities of the men on the ship conflicting and clashing with each other.

There is a strange middle interlude in the film when Surprise chases Acheron to the Galapagos Islands. Dr. Maturin is wounded in a shooting accident, forcing Aubrey to make the choice between continuing his pursuit and saving the life of his friend. Since Maturin is also a naturalist, this gives us a sequence in which the recovering doctor is allowed to wander on the islands several decades before the arrival of Charles Darwin, and we’re led to believe that, were it not for the necessities of the war, we’d all be talking about the theory of natural selection as proposed by Dr. Stephen Maturin in the earliest part of the 19th century.

The strongest aspect of Master and Commander, apart from the boy’s-own adventure nature of the tale, is the realism. Every aspect of life at sea in the earliest part of the 19th century is created as realistically as possible, down to the very language the men speak. It’s beautifully acted in this respect, with a huge cast of characters that become easily identifiable as much from their appearance as from their character traits. We learn that midshipman Hollom (Lee Ingleby) believes himself cursed and is disliked by the rank and file. Calamy (Max Benitz) is Hollom’s direct opposite, respected and a near-perfect sailor despite his youth. For my money, the best side character on the ship is the awesomely named Preserved Killick (David Threlfall), who looks so much like Eric Idle it’s surprising he isn’t really Eric Idle.

This is truly an adventure film more than anything else. It attempts to bring the life on a wooden ship to the audience and appears in the main to succeed. I find myself fascinated by it, by the intricacies and the language and the surprisingly large number of men aboard this small wooden space in the middle of the ocean. I am frankly baffled that others find it dull or uninteresting.

Then again, that’s why there are multiple reviews of every film out there—my tastes aren’t the same as everyone else’s. And while Master and Commander pulled in a substantial amount of money at the box office, it evidently wasn’t enough for this to kick off a new franchise. That’s a shame, because the continuing adventures of “Lucky Jack” Aubrey and his naturalist doctor friend would have been a great thing to see, if only as a real-world counterpart to Pirates of the Caribbean.

Why to watch Master and Commander: The Far Side of the World: Real adventure on the high seas.
Why not to watch: Evidently, I’m crazy for liking it.

Email ThisBlogThis!Share to TwitterShare to FacebookShare to Pinterest
Labels: action, Best Director, Best Picture, Master and Commander: The Far Side of the World, Peter Weir, war