Watching Oscar: The Moon is Blue 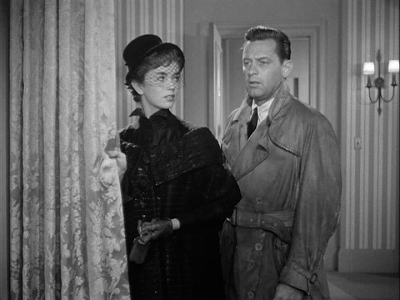 Scandals of past eras are often really entertaining. It’s incredibly funny that a nothing little romp like The Moon is Blue not only created a massive scandal, but also helped take down the Hays Code. The Moon is Blue was so controversial that three states—Kansas, Maryland, and Ohio—actually banned this film for being salacious. It is a little be racy, but only in its conversation. It’s sort of a screwball comedy that is more about sex than it is about love. But that’s as far as it goes—a little very mildly racy talk—and nothing more.

There’s not really a lot to the film in terms of story. Architect Donald Gresham (William Holden) spots attractive young woman Patty O’Neill (Maggie McNamara) in the lobby of the Empire State Building. He’s immediately attracted to her and follows her up to the observation deck. After a little verbal flirting back and forth, it’s evident that the two are attracted to each other and have been paying attention to each other. She noticed what he bought in the store, and he noticed what she was thinking about buying and bought it for her.

When he loses a button, she offers to sew it back on. He surreptitiously hides the needle as an excuse to get her into his apartment, and a sudden storm gets her out of her clothes and into a robe, and then gets her to agree to cook dinner if he buys the groceries. We also get a little tension between Don and his ex-girlfriend/fiancée Cynthia (Dawn Addams). While Don is out buying groceries, Cynthia’s father David Slater (David Niven) arrives. He’s naturally upset that Don and Cynthia have split, but he’s also immediately enchanted by the chatty and attractive Patty, who invites him to stay for dinner.

It’s soon immediately evident that both of these men are attempting to get Patty into bed. It’s equally clear that while Patty loves to talk about her own virginity and the efforts of men to remove it from her, that she’s not going to allow herself to be seduced. She’s completely sexually open (kissing both men passionately at different points in the film) except for the actual sex act. And with some measure of desperation, both men propose to her.

The comedy comes from the conflict between Patty’s openness to discuss matters of sex and love, the two men’s desire to bed her, and her complete naivety as regards their actual intentions. Oh, she knows what their intentions really are, but she chooses to ignore them, preferring instead to put everything on the table so that she is constantly aware of what is going on and the attempted seduction. This frankness is no doubt what caused the furor around this film. The Moon is Blue was characterized as a film that makes the subjects of seduction and pre-marital sex something cute and entertaining. In reality, of course, it’s pretty harmless. I’d be willing to let both of my kids watch it.

For those less versed in the mid-‘50s style of acting, there’s a lot here that will seem strange, particularly in the acting of Maggie McNamara. She’s a wide-eyed innocent who isn’t that innocent, but she plays the role as if she were acting in a 1930s screwball comedy. In a sense, she is, of course. The problem is that actresses in screwball comedies are playing roles that exist nowhere in the real world. The same is true of David Niven in this—he’s a British playboy who has money just because he has money. He’s also got a very strange relationship with his daughter, in that he’s essentially upset with Don for not bedding her.

Released or remade today, The Moon is Blue would no doubt be rated no stronger that PG, and that’s only because of all the talk of Patty’s omnipresent virginity. It’s a little too suggestive for a G rating, what with all of the mention of seduction and the state of her virtue. When it was released, it was shown as an adults-only film in Chicago. Eventually, the case of the film’s banning went all the way to the Supreme Court, a move that significantly weakened the Hays Code.

It’s notable for that, if nothing else. The Moon is Blue is not a great film by any stretch of the imagination, and Maggie McNamara probably didn’t really warrant a Best Actress nomination for what is little more than a mildly suggestive role. It’s worth seeing for what it brought about, but there’s too little here to make it truly interesting.

Why to watch The Moon is Blue: It’s cute, light entertainment.
Why not to watch: If you’re expecting racy, you’re in the wrong place.