Film: Housekeeping
Format: Video from The Magic Flashdrive on laptop. 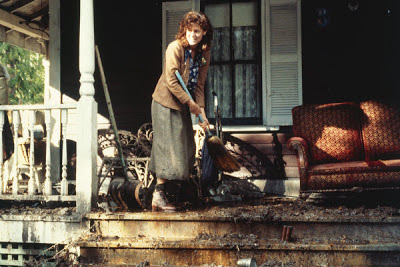 I admit that for a time watching Housekeeping, I was interested in what would and might happen. And then I came to a stark realization two-thirds of the way in. It’s to my shame that it took me that long to figure out what should have been completely obvious much earlier. Housekeeping is a manic pixie dream girl movie with the big twist being that her target/victim isn’t a guy who needs to wake up to the wider world but her niece.

Two young girls who live with their mother (Margot Pinvidic) are suddenly and abruptly taken to visit her mother (Georgie Collins). It’s evident pretty quickly that the mother is abandoning the girls at their grandmother’s house, but it’s a little more surprising when the mom then takes the car she borrowed and drives it off a cliff.

The girls, Lucille (Andrea Burchill) and Ruthie (Sara Walker) are raised by their grandmother in the little Pacific Northwest town of Fingerbone until, eventually, the grandmother dies and a couple of ancient spinster aunts move in. They are soon replaced by Sylvie (Christine Lahti), the girls’ aunt and the sister of their mother. Not a lot is known about Sylvie initially in what we get from Ruthie’s voiceover. That she’s a free spirit and a bit odd is evident, though. She spends part of her first day in Fingerbone walking around the town and warming up in the train station because she lost her gloves and forgot her boots.

I should have twigged that this was an MPDG plot when the house floods during the spring thaw. While the people of Fingerbone do their best to survive in the massive flood, Sylvie acts like nothing has happened, wading through the water in the house as if it weren’t there. We start to notice some oddities about Sylvie. She likes to sleep on park benches and enjoys sitting in the dark. She disappears into the woods for hours at a time and befriends hobos and people riding in freight cars. Lucille is aghast at this and starts to distance herself from Sylvie. Ruthie begins to become enamored of her aunt and slowly becomes more and more invested in her free spirit ideology.

After a year at school in which both of the girls essentially run off into the woods rather than going to school at all, the two girls break apart from each other. Lucille decides that she wants social acceptance and to be like everyone else. She stops talking to Sylvie and Ruthie and lives her own life, eventually moving out and moving into the house of her home economics teacher. Sylvie and Ruthie continue their stationary vagabond existence.

And then it happened, the moment where I finally realized exactly what I found myself in the middle of. As Ruthie comes home from school, Sylvie runs out of the forest with a fish in her pocket. She tells Ruthie of an abandoned boat she uses to find new and interesting places in the forest across the lake and wants to take Ruthie with her to see them. Ruthie goes. And dammit, the whole film unravels for me completely. She can’t find where she left the boat, which is sort of par for the course. Then she does find it, and it’s been very carefully hidden. She and Ruthie push the boat out into the water and start paddling away while a guy laden with fishing gear chases after them. Ruthie, slightly guilty, suggests that it might actually be his boat, but Sylvie is fairly convinced he’s just crazy. And then she tells Ruthie that she believes there are children hiding in the woods watching her when she goes out there—dozens, scores of little feral children in the woods that she tries to tempt out with marshmallows.

Dammit. How the hell did it take me this long to figure out that Sylvie is just Zooey Deschanel wearing a Christine Lahti suit?

The two stay out all night on the lake, which causes a huge uproar of concern for Ruthie, and the Fingerbone equivalent of child protective services gets involved. In this case, it’s a bunch of women from the local church. Of course the house the two live in is a complete disaster area. Why? Because Sylvie is something of a hoarder-in-training and has years’ worth of newspapers and carefully washed tin cans everywhere. Once she realizes that the people mean to take Ruthie away from her, she cleans up her act, which suggests that she’s not really a hoarder but just fantastically lazy. The film would call her “whimsical.”

The problem is where I decide to put my loyalties here. When the women from the church show up, it’s a pretty standard scene. Things happen in the house—like a bird flying through—that we as the audience are supposed to understand are merely a part of Sylvie’s whimsy but that we know the church women will take as a sign of terrible danger for the tender mind that is Ruthie. And we’re supposed to be outraged that none of the townspeople can see that Sylvie is merely making different choices in raising her niece and should leave them alone. But I’m not outraged that much. Sylvie is a dipstick and isn’t responsible enough to take care of herself until she is threatened with the loss of Ruthie. The house probably is dangerous.

In short, I know exactly how I’m supposed to feel while watching Housekeeping play out, but I absolutely do not. The manipulation is obvious, for one thing. For another, Housekeeping has done everything it possibly can to make me want to grab Sylvie by the shoulders and shake her mercilessly. And for all this, the ending is shit.

Being a free spirit is vastly overrated. So is Housekeeping.

Why to watch Housekeeping: The Pacific Northwest makes a beautiful backdrop.
Why not to watch: Once you realize it’s a manic pixie dream plot it’s hard to care.