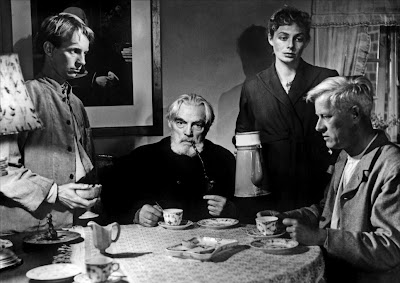 I wanted to say that I tend to have a mixed reaction to the films of Carl Theodor Dreyer. I was genuinely moved by The Passion of Joan of Arc and genuinely bored by Vampyr, although it did have a distinctive look. And then I remembered that Dreyer was also responsible for Gertrud, a film that I believe concerns itself with the romantic life of mannequins. I went into Ordet with some hopes, but I tried my best to keep them moderate. Dreyer’s work has moved me to question why I watch these films, but it’s also given me one of the truly remarkable film experiences I’ve had doing this.

Ordet is a film that seems to touch more on the Passion side of things, but certainly has some connection to Vampyr as well. It is very much a film about religious faith and the lack of faith. It is also about the problems caused by differences of faith, familial duty, miracles, and insanity. Sounds pretty good, right?

Our time is spent with the Borgen family, a family of farmers in Denmark. The patriarch is Morten Borgen (Henrik Malberg), a devout old man who has lost his wife and suffers from rheumatism. His oldest son is Mikkel (Emil Hass Christensen), a man who has renounced his faith. Mikkel is married to Inger (Birgitte Federspiel), who he loves dearly. They have two daughters and Inger is pregnant again, they hope with a son. The youngest son is Anders (Cay Kristiansen), who is desperately in love with Anne Petersen (Gerda Nielsen), the daughter of the local tailor.

It is the middle son, Johannes (Preben Lerdorff Rye), who requires the most explanation. Johannes stalks around the house slowly and speaks cryptically. He does this because he was once a theology student and was deep into the study of Soren Kierkegaard. It drove him mad. I’m not nearly familiar enough with the work and philosophy of Kierkegaard, so I don’t know specifically what it would be that burrowed its way into Johannes’s nut, but Johannes spends the film convinced that he is the returned form of Jesus Christ.

Ordet is one of those films that moves at a real time pace, by which I mean it is incredibly slow. Fortunately, it’s also a film that manages to pull off this pace beautifully. There is a sort of beauty to Ordet in the lives of these people. I was convinced initially that the story took place in the past. The people use oil lamps and drive horse-driven carts. And then, suddenly, there’s a telephone, bringing us into a more modern time.

The initial driving force behind the story is the relationship between Anders and Anne. Anne’s father, Peter Petersen (Ejner Federspiel) is every bit as devout as old Morten, but is of a different sect of Christianity. In Peter Petersen’s mind, anyone who is not a member of his particular version of Christianity is hellbound, and he refuses to let his daughter marry outside of the faith. Initially, Morten is also against the marriage, upset that Anders did not ask his permission and certain that Anne Petersen is not worthy of his son. However, when Anders returns home distraught because Petersen has said he is not good enough for Anne, well, things change very quickly. That’s too much of an affront for Morten, and now he wants nothing more than for his son to marry the tailor’s daughter—especially if it is against the tailor’s wishes.

I expected Ordet to be a slog both from the pace and from the overtly religious themes of the film. And, with that in mind, I do have some real problems with the end. I won’t spoil it, but I will suggest that it follows that same old film belief that anyone who starts the film without religious faith must end the film with his or her faith restored. It’s like a law that film characters are unfulfilled unless they love Jesus.

Despite this, I rather liked a lot of Ordet. The pace suits it perfectly. I also genuinely liked many of the characters and enjoyed spending time with them. The Borgen family is a family built on and maintained through love, and it’s nice to see and experience. There are also some truly fantastic shots that are set up beautifully, something Dreyer was a master of. I have a hard time recommending Ordet because of the ending, but I also can’t say it’s a film to avoid. Those of a more believing bent will no doubt find much more to love here than I did.

Why to watch Ordet: The family relationships are more tender than expected.
Why not to watch: It’s pretty heavily religious—too much for an apostate like yours truly.