Film: She’s Gotta Have It
Format: DVD from Rockford Public Library on laptop. 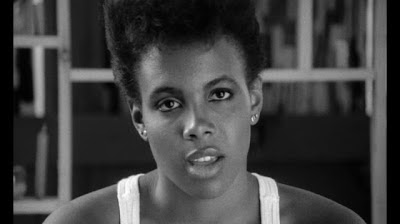 I like a lot of Spike Lee’s films. I think sometimes he loses himself in his message, but I appreciate what he is capable of. When Spike Lee is on, he’s as good as any other director out there. When he arrived on the scene and especially with the release of Do the Right Thing, he became the de facto voice of the urban African American filmmaker whether he deserved or wanted that title or not. His first full-length feature was She’s Gotta Have It, which shows both the potential and the mistakes of a young filmmaker capable of doing some pretty great things.

Fortunately for Lee and his audience, this film, while filled with the ambition of a new filmmaker, restrains itself by keeping the story extremely simple. The ambition is everywhere else outside of the narrative. Put simply, She’s Gotta Have It is the story of Nola Darling (Tracy Camilla Johns) and the three men in her life. Each of the three men have a sexual relationship with Nola and each of them wants her exclusively. Nola, however, finds no reason to choose between the three of them and finds something of value in each of them.

The first of the three men is Jamie (Tommy Redmond Hicks). He’s a nice enough guy and genuinely appears to care for Nola, but is also incredibly possessive of her. The second we are introduced to is Mars (Lee himself), a sort of out of work bicycle courier who is less possessive, but also less successful. Our third suitor is Greer (John Canada Terrell), a successful male model who wants Nola but is also agonizingly self-centered.

Really, the film is nothing more than her relationship with the three men and, once we get the Thanksgiving dinner with all four people, between the three men. Like I said, this is not an ambitious story in terms of narrative. But it is ambitious in a lot of other ways. For starters, it’s one of the first films where an entirely African-American cast is, for lack of a better way to put this, middle class. These are not black stereotype characters but characters who merely happen to be black. It shouldn’t be as surprising as it is—and with a moment’s thought it isn’t surprising. However, given the typical Hollywood depiction of the urban community and the content of the previous decade’s Blaxploitation films, it is surprising.

Second, and this is really key, it’s one of the first films around that deals with female sexuality in the way that films typically deal with male sexuality. Ten or twenty years previously, Nola’s behavior would brand her as a slut or a whore. Here, we’re given the words of a psychologist (played by the vastly underrated S. Epatha Merkerson) that Nola is an entirely and completely healthy young woman with a completely normal and natural sex drive.

It’s also ambitious in the way it tells the story. We spend a good deal of time with the characters speaking directly to the camera as if we are interviewing them, having just asked them a question. This is particularly true of Jamie and Nola herself, who talk to the camera frequently. I love the burst of color film as well—it comes as a sudden surprise in the middle of something otherwise in tasteful black-and-white.

These are all of the positives of She’s Gotta Have It. There’s one major problem with the film, and it’s an unfortunately damn big one. That’s that the delivery of almost all of the dialogue is so stilted that I unconsciously wanted to turn around to see if there was a live theater audience behind me watching this on stage. It frequently reads like a stage production instead of a film. The dialogue is incredibly unnatural throughout as well. No one talks like these characters. The cute closing in which each of the actors says his or her name over a clapboard is far more natural than any of the speech within the film.

Because of that, it’s difficult to watch sometimes. The line readings are completely unnatural, and that makes a lot of what’s going on here feel unnatural even though it shouldn’t. It actually would play pretty well on a stage, but it’s far too stilted to come across well on film.

I will give it this, though—it ends exactly as it should. The conclusion really pissed me off until I realized that it wasn’t the actual conclusion. That saved the film.

Did I like it? I’m not entirely sure. I like what it led to in Lee’s career. I like its ambition a lot. It shows the promise that many of his later films fulfilled. But it’s too raw and a little too amateurish to be a really great film. Still, there have been far worse debuts.

Why to watch She’s Gotta Have It: The cinematic birth of Spike Lee.
Why not to watch: It’s far more wooden than you might expect.

Posted by SJHoneywell at 8:18 PM