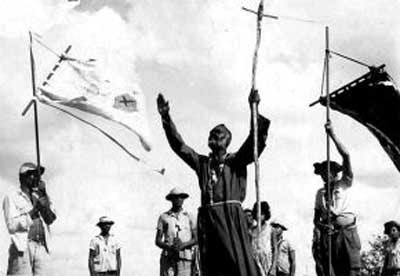 Glauber Rocha’s Deus e o Diablo na Terra do Sol (Black God White Devil) belongs to a special class and category of film. This is a “dust people” film. Everyone in the film lives in a blasted wasteland where it seems nothing should be able to survive. The men act like impoverished men, meaning they do everything they can to dig themselves out of the pit they live in and waste their money and effort foolishly. They all dream big and exist with a sullen look in their eyes. The women are beautiful in a way that only suffering can create and frequently look like they are about to collapse. It’s the sort of film that makes you thirsty watching it; everything is covered in a thin (or a thick) layer of grime, and the people eat with their fingers from bowls by grasping bits of food and throwing it into their mouths.

So it’s one of those films, where we will witness the poor and downtrodden become poorer and more downtrodden as life and the wealthy conspire against them, leaving them with nothing but their pure and honest faith to pull them through. Within the first 20 minutes, our main character Manuel (Geraldo Del Ray) brings 12 cows to market, but has four die from bad water and snake bites. He’s told by his boss that the dead cows are his loss and he is responsible for them. Oh, the downtroddening starts right away. So it was incredibly surprising when our poor, oppressed hero whips out his machete and kills his boss. Really, I was expecting something like Vidas Secas and found myself smack in the middle of Jimmie Blacksmith.

As may be expected from a film out of South America, Deus e o Diabo trades heavily on ideas of faith, and more specifically, on the Catholic faith. It stars immediately, before even the triggering action that eventually drives the opening half of the film, when Manuel sees Sebastian (Lidio Silva), a man he believes is the actual Saint Sebastian. After the killing, he and his wife Rosa (Yona Magalhaes) head to a mountaintop chapel to receive some sort of absolution. But this priest is not a man of peace but of violence, and his followers, including Manuel, happily kill in his name.

They kill because they have been promised a miracle of a new land of riches for them to inhabit. Sebastian tells them of a world where the stones become bread and the rivers flow with milk. Only by following what he tells them will his miracles come to fruition, and so the people march on his orders, eventually earning the attention of the ruling class and the ruling priesthood, who want Sebastian stopped.

I remember seeing an interview with Guillermo del Toro in which he said something to the effect that experiences with the divine and be those that raise us up, but can just as easily be experiences that terrify us and shake us with fear. Deus e o Diabo is filled with this kind of ecstatic religious energy. The moments of religious transcendence here are not uplifting, but brutal and horrible. People scream in ecstatic fervor, but it is a fervor made of pain and horror. Nothing in the film is more awful than the sacrifice that happens right about at the midpoint. Of this I will not speak, save to say that even within the context of this film, it was a truly terrible moment.

By all rights, Deus e o Diabo is as much a horror movie in places as it is anything else. The ruling class and priests are no less culpable thanks to the slaughter of innocents they authorize at the hands of their hired killer Antonio (Mauricio do Valle). Death of one form or another seems to lurk in every frame of this film. It is an unquestionably dark and bleak experience. This doesn’t change when Manuel and Rosa eventually meet up with Corisco (Othon Bastos), who is leading his own crusade (and who looks just a little too much like Jack Black for comfort).

But this does not mean it is not a valuable experience or one not worth taking. In a significant respect, Deus e o Diabo does have a great deal of similarity to those other films about the “dust people,” because there is never a moment of real, genuine hope here at all. What Deus e o Diabo does is make religious belief just as guilty in the oppression and suffering of the people as the economic realities of their life. There is no escape for them from anything—those seeking to shelter themselves in the comfort of the church find either lunacy and violence or the same oppressive rules and reality that has always been there.

I put this film off for a long time—close to the end of this journey—strictly because it was one that I couldn’t make myself interested in seeing. There are plenty of moments here that are amateurish, even goofy thanks to a low budget and presumably non-professional actors. Regardless of this, Deus e o Diabo has moments of genuine horror. It also presents a deconstruction of societal values, degrading the ruling class, religion, and sectarianism, so I like it on that level. It’s hard to recommend and equally hard to forget.

Why to watch Deus e o Diabo na Terra do Sol: A film that goes in surprising directions.
Why not to watch: Despite its exotic location, it’s often squalid.

Posted by SJHoneywell at 1:50 PM