One of the things I have really enjoyed about watching all of these films on the 1001 Movies list is the number of interesting discoveries I’ve made. Not only have I found a bunch of films that I really like, I’ve also discovered directors whose work I will now start seeking out. Todd Haynes is one such director. I’ve seen two of his films now and while the biggest similarity is the presence of Julianne Moore, there is a strange connection between them. Haynes comes across as a more socially acceptable David Lynch, or at least one who hits some of the same topics without all of the concomitant weirdness that goes along with Lynch. In other words, if you want to like Lynch or think you should but just can’t, try something by Todd Haynes. 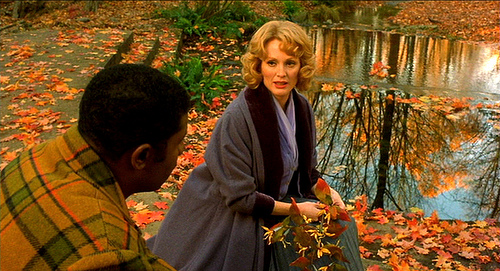 What makes a film like Far from Heaven interesting is that it deals with some modern issues, but in the context of the 1950s. What we can freely and openly talk about—in this case homosexuality and interracial relationships—were taboos to the point of the ideas being non-existent in the world of this film.

Cathy Whitaker (Julianne Moore) lives the perfect 1950s upper-middle class lifestyle. She raises her kids (with the assistance of live-in help Sybil, a thankless role played beautifully by Viola Davis), attends and hosts parties, involves herself in the community, and otherwise lives and acts like she should be living next door to the Cleavers. Her husband Frank (Dennis Quaid) is an advertising executive who maybe works too hard, but is a good provider for the family. So it’s disturbing when one night he doesn’t come home. Cathy gets a call from the police station—Frank is being held until she comes to get him. On the drive home, he tells her it was a misunderstanding with the police.

But it wasn’t. Frank is hiding the darkest secret a man in the 1950s could hide: he has homosexual impulses. Cathy catches him in a passionate embrace with a man at the end of the first act, which leads to Frank entering conversion therapy and slowly descending into alcoholism. At the same time, Cathy strikes up an acquaintance with Raymond Deagan (Dennis Haysbert), the son of her late gardener. In conversation, Cathy discovers that the only real divide between the two of them is the frowned-upon racial one. Raymond is intelligent, well-educated, and as successful as a black man can be in 1950s Connecticut. It’s also important that he is raising his daughter Sarah (Jordan Puryear) on his own since the death of his wife.

What happens, of course, is inevitable. As Frank begins to pull away from Cathy and fall into alcoholism and his own inner demons, Cathy begins to draw closer to Raymond, first as a sympathetic ear, and then as potentially more. When Cathy and Raymond are spotted by a small-minded town gossip, it occurred to me that Far from Heaven is very much a race-infused retelling of the story in All that Heaven Allows, albeit with far less melodrama.

Haynes is masterful with the storytelling here despite any similarity to other films. Cathy’s situation is one that puts her in the middle of two scandals, both of which she is helpless to do anything about. In the world of today, her husband’s homosexuality is by far the more controversial and shocking issue (and even that is less shocking than it was when this film was made). But in the film world, Haynes gets us to realize that Cathy spending time with a black widower is, if not more shocking to the other people in the film, something equally scandal worthy. The fact that their romance is not even a real romance doesn’t matter; the very appearance of her even spending time with Raymond is something that, well, nice white women in Eisenhower’s America just don’t do.

Haynes also uses a soundtrack that is appropriate for the film and reminiscent of films from the 1950s. It’s subtle, but brilliantly so. We know in our hearts that there is no way this film can end well, or end in the way we would like it to today, but the soundtrack so easily calls up films that invariably ended on a high note that we keep our hopes up the whole time.

Julianne Moore, of course, is wonderful. No surprises there—she was Oscar-nominated for the role. Dennis Quaid is likewise excellent, showing real skill in playing a man this deeply conflicted. It is Dennis Haysbert, though, who very much makes his presence known. He is a commanding screen presence here. He towers over the other men in the film, a subtle indication of the virility that so worries everyone else in this Connecticut town. His voice equally demands attention.

Far from Heaven is surprisingly moving. It’s also smartly manipulative. The vast majority of people today immediately sympathize both with Cathy and with Raymond, and many will sympathize with Frank’s internal plight. Setting the film in a time when none of them can end up happy is brilliant, and makes everything work.

I’m going to watch for more Todd Haynes in the future. So far from what I’ve seen, he hasn’t missed yet.

Why to watch Far from Heaven: Topics that are still modern touch points for some.
Why not to watch: If you’re homophobic or racist, it will anger you.

Posted by SJHoneywell at 8:17 PM