Sex for Fun and (Mostly) Profit 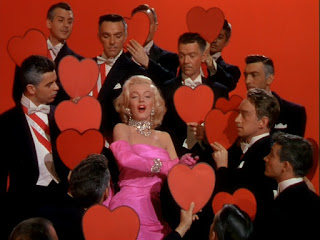 This one is going to be interesting. On the one hand, Gentlemen Prefer Blondes is Howard Hawks at close to his best, one of Marilyn Monroe’s few films, and Jane Russell consistently stealing the show. On the other hand, this film represents pretty much everything I hate about the sensibilities of 1950s comedies, romances, and musicals. There’s a lot here to like, but a lot here to object to as well.

This is a pretty standard late-screwball-era screwball. There’s all manner of people getting the wrong ideas from harmless actions and people acting stupidly. Plus there’s a shit-ton of singing and dancing. Singing duo Lorelei Lee (Marilyn Monroe) and Dorothy Shaw (Jane Russell) preform a quick number and we’re then introduced to them. Lorelei is interested only in wealthy men, which is why she’s being romanced by the nerdy but screamingly rich Gus Esmond, Jr. (Tommy Noonan). Her plan is for them to be married in Paris, but Gus is forced to stay home by his father when Lorelei and Dorothy go on tour across the pond.

As a way to make up for his non-presence, Gus extends the two women a line of credit and arranges a room for them. What we soon learn is that their ship is loaded with a few things. The first is rich men (Lorelei’s weakness) and the second is members of the American Olympic team (Dorothy’s weakness). The third thing on the ship is Ernie Malone (Elliott Reed). Malone has been hired to spy on Lorelei, and he quickly develops a thing for Dorothy, who reciprocates because he’s a good-looking guy.

From here, we get a lot of the sort of screwball antics that are common to this sort of film, primarily through the character of Sir Francis “Piggy” Beekman (Charles Coburn), who operates the second largest diamond mine in the world. When Lorelei finds out about this, she naturally becomes entranced with the fat, old goof in the hopes of scoring a few diamonds off of him. This especially becomes the case when she gets a load of Lady Beekman’s (Norma Varden) diamond-encrusted tiara.

Through some shenanigans, Ernie gets photos of Piggy and Lorelei in a clinch, which will destroy her relationship with Gus and will also cause some serious problems with Piggy’s marriage. The two women then conspire to get the film from Ernie, concocting a plan involving booze, sleeping pills, and a pitcher of water. When Lorelei shows the pictures to Piggy, he realizes what could have happened, and offers to reward her. Naturally, she asks for his wife’s tiara as her just desserts for saving his marriage. And, naturally, once she has the tiara, Lady Beekman claims it’s been stolen. Meanwhile, Ernie has reported on Lorelei’s shenanigans to Gus and his father, which cuts off the women’s line of credit.

Of course, since this is a musical and a comedy, everything is going to work out fine in the end. Gus and Lorelei will end up together and Dorothy will stop being upset with Ernie, and everyone will get what they want. You should know that going in, and if that’s a surprise to you, it’s because you haven’t watched a lot of musicals in general.

So here’s the issue I have, and if you’ve seen this film, you know exactly where I’m going to go with this. It’s mostly wrapped up in the character of Lorelei, who couldn’t be more mercenary if she tried. She is an absolute gold digger, makes no bones about it, and thinks that she should be lauded for it. It’s ugly. More than that, it’s not one of her better performances. Marilyn Monroe Lorelei plays up the dumb blonde angle, which seriously irritates me. She also makes a habit of over-enunciating particular parts of words, so much of her dialogue comes out as painfully unnatural.

Nowhere is Lorelei’s mercenary nature more prevalent than in the show-stopper song, “Diamonds are a Girl’s Best Friend.” The entire point of the song is her saying that she wants jewelry, and that only that matters to her. Her entire persona is wrapped around the idea of acquisition, and at one point, she openly admits that she’s marrying Gus for the money he will inherit, and demands that she be allowed to act in any way that she wishes regardless of those actions or consequences.

I get why people like this film. There are certainly parts that are fun and funny. One of the better gags concerns the presence of Henry Spofford III (George Winslow) on the ship. Lorelei, hoping to set up Dorothy with a rich man, arranges for Spofford to be seated at their dinner table only to discover that Spofford is maybe 9. George Winslow pulls this off beautifully, and manages to get a number of fantastic lines.

In the end, though, I can’t get past the film’s shameless endorsement of gold digging.

Why to watch Gentlemen Prefer Blondes: It’s a classic of the genre.
Why not to watch: The subtext is shite.