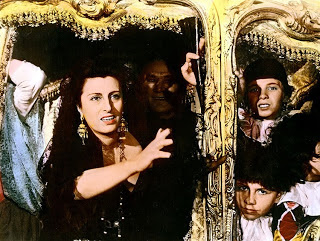 How do I explain a film like Le Carrosse D’Or (The Golden Coach)? Roger Ebert used to talk about films that had what he called an “idiot plot,” a film in which the whole plot could be short circuited by someone saying or doing a specific thing at one point in the course of the film. In the case of this film, the issue is entirely one of personal pride. Everyone has an ego the size of a truck, and the entire film is these egos banging into each other.

So here goes: in a small area of South America, a magnificent golden coach is delivered to Ferdinand (Duncan Lamont), the viceroy of this Spanish colony. Also on the boat is a troupe of actors, the most relevant of whom is Camilla (Anna Magnani), the star of the show and evidently the most irresistible woman in the world. Also on the boat is her current squeeze Felipe (Paul Campbell).

Viceroy Ferdinand has a problem with the coach, though. He wants to write off the expense of the coach, but his mistress Irene (Gisella Matthews) wants the coach for herself. In Ferdinand’s opinion, the coach is a symbol of Spanish power in this part of the world, which means that Irene isn’t getting her coach.

Rather than draw this out, I’m going to just hammer out the love pentangle here. First, Felipe is in love with Camilla, who seems to love him back. However, the troupe is dead broke and she’s of the type more than willing to offer her affections to anyone who looks like they can afford them. Naturally, Ferdinand becomes enamored of her, affections she returns because he’s the viceroy, and thus both powerful and rich. Irene is a fly in that particular ointment, since she believes she has a prior claim to Ferdinand’s affections, power, and money. Finally, we bring in Ramon (Riccardo Rioli), a bullfighter, who is equally sure of his chances with Camilla. Ramon is the stereotype—he’ll happily kill anyone who so much as looks at Camilla in a way he doesn’t like.

Eventually, it all comes down to the titular coach. Ferdinand gives it away, much to the shock of the nobles in the area. In fact, they make keeping the coach in possession of the state a matter of national security, promising help with a local war effort if he keeps the coach. And Ramon wants her to give to coach back since he is essentially claiming her as a possession. Felipe, in all of this, has wandered off to war and comes back at precisely the wrong time for him (but the right time for the plot) to have all of this come to a head. He wants to start a new life among the natives, which means he wants her to give the coach back, too.

In terms of plot, Le Carrosse D’Or doesn’t offer anything that isn’t straight out of the playbook. There’s a happy ending for just about everyone here lurking in the middle of all of the relationships, and the entire point of the film is getting us to that point once everything is set up. The point in the watching is seeing exactly how we get to that end and in discovering exactly which of our characters get the happy ending and how the characters we don’t like end up on the short end.

Of course, all of this happens with a massive collection of mix-ups and misidentifications and mistaken identities and eventually a duel. There’s also an extended scene in which Ferdinand tries to deal with Camilla, Irene, and an angry council of nobles at the same time. And it all eventually comes down to Camilla’s decision of what to do with the three men who love her and the golden coach itself.

I suppose the other reason to see this is for the sumptuousness of the sets and the costumes, which really are pretty spectacular.

The entire film comes down to pride. I realize that we are more or less supposed to sympathize with Camilla, but it’s difficult to do so when her pride is the driving force of the entire film, and it’s a pride that nearly kills off several people who claim to love her and whom she claims to love in return. Sure, she manages to learn a lesson from all of this in the end, but it’s difficult for me to sympathize with her through the bulk of the film when she creates all of the problems to begin with.

There are some good comic moments in this film, but a simple resolution was there the entire time, so it’s hard to get too involved with the characters when you want to slap half of them silly. And the ending comes upon us so quickly that I simply don’t buy it.

Why to watch Le Carrosse D’Or: Spectacle of a type rarely made any more.
Why not to watch: Ultimately, it’s pretty dippy.

Posted by SJHoneywell at 1:09 PM