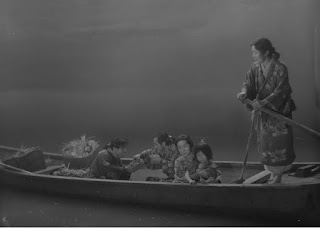 Following the 1001 Movies List has taken me any number of places I couldn’t have predicted going. Sometimes this is a good thing and sometimes it’s very much a bad thing. I can’t say it hasn’t been interesting, though. Ugetsu Monogatari (typically called Ugetsu but listed as Tales of Ugetsu in The Book) is a film I would probably never have chosen to watch. That would have been a shame.

This is a surprisingly complex story for what is at its heart little more than a ghost story. Like many a Japanese period piece, Ugetsu Monogatari takes place in the heart of the samurai era during a vicious civil war. However, the film does not focus on the samurai. Instead, our time is spent with two peasant families. Genjuro (Masayuki Mori) is a potter and hopes that the coming war will increase his prices and make him rich. His wife Miyagi (Kinoyu Tanaka) is satisfied with the money they have and would like him to stay home and protect her and their child Genichi (Ikio Sawamura). Their neighbors are Tobei (Eitaro Ozawa) and Ohama (Mitsuko Mito). Tobei wishes for nothing more than to be a samurai, and earns a living by assisting Genjuro and thus getting some of his profit.

When their village is attacked, the two families hide in the woods, then sneak back and recover the completed crockery. Their goal now is to sell it in another market and become rich. On the way, by boat, they encounter a man who was attacked by pirates. He warns them and promptly dies, forcing the two families to return to the shore. The men let the women out and then head to the market on their own, leaving Miyagi and child to fend for themselves. This leads eventually to Ohama being raped and ending up in a brothel, Miyagi fighting with a group of soldiers and being stabbed, and Tobei buying samurai armor and sneaking into an encampment to become a samurai. Most importantly, it leads to a massive sale for Genjuro.

This sale is to the Lady Wakasa (Machiko Kyo), who we eventually learn is actually a ghost who has returned to the world because she was never able to experience real love in her lifetime. She has her sights set on Genjuro, who is entranced by her (in part, no doubt, because of her wealth and in spite of the fact that she is a ghost). Eventually, he wises up and returns to his wife and child, only to discover that the prophecies made earlier in his journey have come true. No, I won’t reveal what those prophecies are.

This is a subtle film, and it works on any number of levels. It starts almost as a morality tale about the dangers of greed, but soon becomes something different but related. Ugetsu Monogatari is, from what I could tell of it, very much about the idea of obsession. Genjuro is obsessed with money and wealth initially, and Tobei with military glory and fame. In a sense, both of them are given a chance to achieve these things and both of them end up paying a terrible price for pursuing these obsessions.

In a very real sense, Ugetsu Monogatari is about not attempting to rise above one’s station. That might be a harsh reading of the film’s ultimate message, but it’s impossible to get away from the fact that both Genjuro and Tobei get everything they want and then discover that they already had everything they need and desire nothing more than to go back to the simple lives they led. A friendlier reading of this would be to suggest that the real message is that health and home are all anyone really needs and attempting to reach beyond a sort of basic domestic bliss is always to be fraught with danger, pain, and misery.

What’s noteworthy more than anything is that while the story is decidedly Japanese, the acting style is more Western than I am used to seeing in Japanese films of this period. It seems far more natural than many of the Kabuki or Noh-inspired acting styles of similar period Japanese films. While there is some evidence of the over-exaggeration common to such films, it’s far less drastic than I expected. This was a very pleasant surprise. The ghost characters have that touch of the Kabuki to them, most likely to give them a definite otherworldly air.

I also liked the small touches of the supernatural that run through the film. While there is certainly an element of horror here (most things that deal with ghosts have at least a touch), this is hardly a horror film or even a scary one. And yet it still manages the occasional spine tingle when characters realize that their world has been touched by the next.

Ultimately, I was pleasantly surprised by Ugetsu Monogatari. The story is entertaining, even if the message might be a little suspicious.

Why to watch Ugetsu Monogatari: A surprising ghost story.
Why not to watch: The ultimate message may be provincial in the extreme.