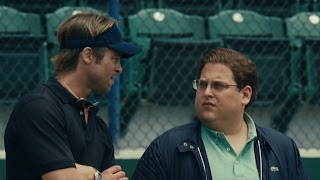 I had three immediate thoughts on Moneyball when I watched it. First and foremost is that people love underdog stories. Since this is a baseball movie, there are large parts of the world where it will probably not have found much of an audience, but a good underdog story always works. For as much as we love success, we really love success at the expense of someone powerful. There is something ultimately satisfying about seeing someone stick it to the man. Mostly, I think that’s because most of us are underdogs in one sense or another—my guess is that everyone reading along here doesn’t have millions in the bank or a lucrative recording contract or ideas for dozens of patents. So there’s something attractive about seeing someone we can relate to make it in a big way.

The moment after I had that first thought came my second—in the movies, the underdog almost always wins for a reason. If he or she doesn’t win the big game, or succeed in business (with or without really trying), or survive the battle against all odds, or whatever, there wouldn’t be much of a movie. No one wants to see the school with the great football team beat up the guys who haven’t won a game in 10 years. They certainly don’t want to get to know the losers on a more personal level and then see them get annihilated.

Combine these two thoughts, and you get Moneyball. (Yes, I know I said I had three thoughts. Wait for it.) We’ve got a true, real world underdog story here, but there’s really no mystery that it will be successful, is there? If Billy Beane (played by Brad Pitt) and Peter Brand (played by Jonah Hill) hadn’t been successful with their low-cost scheme to rebuild the Oakland A’s, would it have been worthy of a book and a movie?

That is the story here. The A’s end the 2001 season by losing to the New York Yankees in five games in the postseason. After the season, the A’s, the very definition of a small market team, can no longer afford three of their star players and lose them to bigger market teams able to spend more on players. Beane is charged with essentially rebuilding with a third of the money of the Yankees and is asked to be competitive with the big teams. It’s the sort of proposition that simply doesn’t work and ends up with the team’s general manager (Beane) out on his ass at the end of the year.

Looking to make acquisitions in the off-season, Beane encounters Peter Brand working for the Cleveland franchise. Brand is a Yale-educated economist with unique ideas on what players are actually worth and why. On a hunch, Beane hires Brand as his new assistant GM. Brand’s ideas are to look at what players are really worth through their statistics. If a walk is as good as a hit, someone who walks a lot is as valuable as someone who hits a lot of singles, despite most people not seeing it that way. Brand realizes that many players with good statistics are undervalued for one reason or another and can be acquired cheaply, and thus Oakland rebuilds a team of misfits and rejects to compete with the bigger markets.

Yes, it sounds like traditional Hollywood sports film fare. The difference is that Beane and Brand really did this, and their 2002 baseball season was actually more successful in terms of wins than the year before with three bona fide stars. It’s a case of life imitating art. Similarly, when Oakland approaches the American League record for most consecutive wins, the final game is straight out of 1940s low-budget sports films, except that once again, it’s exactly what really happened, down to the hero of the game being an undervalued former catcher with nerve damage preventing his ability to throw the ball.

The film features decent performances all around. Particularly interesting is Philip Seymour Hoffman as manager Art Howe. Evidently, shaving Hoffman’s head ages him about 20 years. Jonah Hill is the standout for me—after years of playing goofy comedic characters he managed to pull off a solid dramatic role. Pitt’s performance is solid, but probably not worthy of a Best Actor nomination.

So what was my third thought regarding Moneyball? At some point in the past, Brad Pitt decided that acting equals eating. I think it started with Oceans 11, but it certainly continued into this film. Moneyball would have us believe that Billy Beane eats sunflower seeds at a near-constant clip and almost always has some drink or another in his hand. I don’t know exactly why he’s made this decision, but it’s impossible to avoid the thought that he has consciously made the “I have to act; give me something to eat!” connection in his brain.

Why to watch Moneyball: Because everyone loves an underdog.
Why not to watch: Because you know from the outset it’s not going to be a complete failure.