Cartier's is More of a Lunch Place 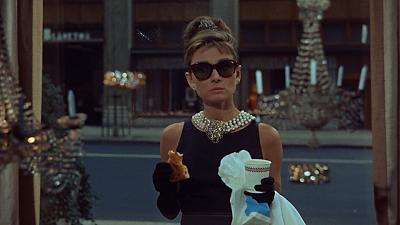 Let’s get the unpleasant business out of the way right off the top. Yes, Mickey Rooney’s depiction of Y.I. Yunioshi in Breakfast at Tiffany’s is unfortunate, ugly, and racist. No, I don’t think it was specifically intended that way, but it’s absolutely how it plays out. Times change, opinions change, behavior changes. We move on. Pretty much everyone involved in the film has commented that he or she wishes it were not the way it is. In one sense, it’s a good thing that we’ve evolved socially enough that we can be made uncomfortable by an ugly stereotype or a character made specifically comic because of his national origin. On the other hand, it puts a pretty solid black mark on what is otherwise considered a classic and what is one of the crown jewels in Audrey Hepburn’s catalog.

I wanted to address that off the bat because blatant racism is something I’ve taken films to task for in the past, even when such racism was a product of its time. I get that we’ve evolved enough to understand it was wrong and that gives us a leg up on where the film industry was 50 years ago. Bully for us. The upcoming release of The Lone Ranger with Johnny Depp in the role of a Native American shows that we also haven’t progressed that much beyond the whitewashing of a lot of roles. So, now that we acknowledge this and decry it, let’s move on to the rest of the film. At the very least, the ugly stereotype exists only in bits and pieces and not center stage as in many of the works of D.W. Griffith.

Breakfast at Tiffany’s is a film that has been, whether by ignorance or will, misrepresented by its packaging and reputation for a long time. It’s routinely thought of as a comedy, and there are comedic elements to it, many of which come in the Yunioshi character and fall flat today. These days, calling this a comedy is a much harder sell when it’s almost a straight drama with a pretty hefty romantic element. Yeah, I labeled it as a comedy, too, because it was there in intent. It’s just not there in reality, at least not anymore.

This is the story of Holly Golightly (Audrey Hepburn), a New York socialite with no visible means of support other than the patronage of wealthy men. If that makes her sound something like a call girl, that’s with reason, because that’s pretty much what she is. She probably wouldn’t call herself that, and a charitable view of her wouldn’t technically label her that, either.

The fun starts with the arrival of sometime author Paul Varjak (George Peppard), who moves into her building. Holly decides that Paul looks quite a bit like her beloved brother Fred and decides also to call him Fred (or more aptly “Fred, darling”) at all opportunities. We soon learn that Paul himself is a kept man. He hasn’t published anything in years and his apartment and lifestyle are generously furnished by Emily Eustace “2-E” Failenson (Patricia Neal), a married woman with a thing for writers, or at least for Paul.

Part of Holly’s income is a weekly trip to Sing-Sing to visit the notorious Sally Tomato (Alan Reed). She speaks with him and every week he gives her a cryptic “weather report” she takes back to his lawyer. Because Holly is willfully naïve, she doesn’t allow herself to realize that she’s bringing back coded messages. This comes up at the end, and is really what forces the ultimate ending. Regardless, while both Holly and Paul are kept to a certain extent, they begin a friendship that is something like, but not quite, a romance. Paul, however, falls deeply for her despite her obvious ambition of marrying into wealth.

One of the most common reads of Breakfast at Tiffany’s is to peg Holly Golightly as a manic pixie dream girl, which is only partly true. It’s certainly true that she fills that role in the specific that Paul falls in love with her. It’s true in the sense that she is uncaring about what most other people care about—she’s definitely her own person. But that’s really it. In fact, in terms of how the two function in the plot, it could be easily argued that Paul is the one who saves her from her own downward spiral and wakes her up to a reality by essentially dumping reality on her.

I want to like this more than I do, and I’m sad to say that what I tend to dislike is the MPDG aspects of Holly Golightly. Late in the film, when she and Paul are arrested for her association with Sally Tomato, she treats her time in the police station as if she’s being interviewed on television. I don’t find anything entertaining or fun in someone being willfully naïve.

But I’m okay with that in the main. As much as a character like Holly Golightly would infuriate me in real life, the fact that she’s played by Audrey Hepburn cures a lot of ills. And really, it’s pretty awesome that her romantic opposite is Hannibal Smith.

Why to watch Breakfast at Tiffany’s: Audrey Hepburn and George Peppard.
Why not to watch: Mickey Rooney, through no real fault of his own.

Posted by SJHoneywell at 3:56 PM