Out for a Spin 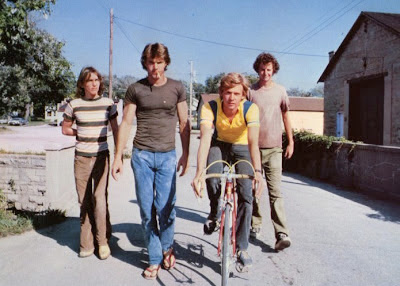 Breaking Away ranks in my mother’s top however-many of films. Mom loves this film. I’m not exactly sure why it resonates so completely with her; fortunately, this blog doesn’t have to try to explain the tastes of my mom or of anyone else. Breaking Away is a classic underdog story, although there are some important differences that raise it above the genre.

The film takes place in Bloomington, Indiana, home of Indiana University. The end of the film spirals around the Little 500, an annual bike race at the university. The bike race is based roughly on the Indy 500. Teams of four in this case ride a bike round and round a track. One of those significant differences between this film and the typical sports underdog film is this—the Little 500 is mentioned several times in the film, but is only really relevant in the third act. We don’t spend the whole film building to it—it just happens at the end.

While much of the film takes place on and around the IU campus, it concerns itself with a group of four locals. These are Mike (Dennis Quaid), the local with a chip on his shoulder and a natural resentment for the college; Cyril (Daniel Stern), a goofy, good-natured sort of loser; Moocher (Jackie Earle Haley), shorter than the rest and frustrated because of it; and Dave (Dennis Christopher). Dave Stoller is by far our main character. His passion is cycling and he idolizes the Italian Cinzano team, even taken to learning Italian and speaking with a fake Italian accent at every opportunity. Dave is not just impassioned about cycling, he’s also really, really good at it. Here’s another critical difference. Our group of underdogs are underdogs because of who they are—local boys—rather than being a team of misfits. As Dave shows over and over again in the film, he’s really talented.

Dave’s Italianophilia is looked on with amusement by his mother (Barbara Barrie) and with complete frustration by his fast-talking car salesman father (Paul Dooley). A vast majority of the comic relief in Breaking Away comes from Paul Dooley’s performance. If you ask my mother, one of the great tragedies of the Oscars is that he wasn’t nominated for Best Supporting Actor for this role. When I was a kid, I would nod and smile when she said that. Having seen the film again, I have to give her credit. She’s right; Paul Dooley got robbed. He’s a bit of a crook, has an anti-Italian streak a mile wide, and he’s devastatingly funny.

While a lot of this concerns Dave and his love of cycling and all things Italian, this is really just a backdrop for what this is really about—the coming of age of these four local guys who feel like strangers in their own town because of the college. They feel like they’re not welcome on the campus in the middle of their city, and the college students do as much as they can to keep them from feeling like they belong. There are the standard tropes of the genre—a college guy named Rod (Hart Bochner), who is rich and good-looking, and dating Katherine (Robyn Douglass), who Mike suddenly develops an interest in, because again, that’s the way the genre works.

I’m not going to go into a great deal of detail here, because it’s pretty standard stuff for the underdog genre. The rich college kids don’t accept the locals and the locals (especially Mike, who used to be the high school quarterback) resent them, hate them, and envy them. While the details are different here, the events are not too unexpected. The difference here is that in the case of Breaking Away, it’s really good. The subplot of the Italian team is pretty interesting. At one point, the Cinzano team comes to Bloomington for a race and Dave naturally joins up. It’s here that we really learn how good Dave is—starting from the main pack, he eventually catches up to the Italians, who eventually get tired of this young upstart and sabotage his bike. This knocks Dave out of the race and completely disillusions him—his idols cheat to win. That this happens shortly after he discovers his father trying to cheat a customer only adds insult to this.

But of course Dave loves cycling, and the Little 500 awaits. In retrospect, it feels like this part of the film dominates the whole thing, but the Little 500 is maybe 15 minutes of the film. And it follows the same tropes that you expect. The local team of the four guys (called “Cutters” because of the old limestone quarries that used to be the town’s industry) starts in the back and Dave brings them up to the front. Then trouble happens and everyone has to help. Again, it’s pretty standard stuff, but it’s done really, really well.

One of the great things about Breaking Away is that it really does focus on the four guys and gives them each a distinct personality. While Rod the college student is something of a rival, he’s never really built up into anything like a serious villain; he’s just a jerk they run into now and then. Even though it goes through a lot of the same ups and downs we expect in a sports underdog film, everything is handled in a way to make it seem far more realistic and believable than fake rivalry and manufactured conflict.

Even when the film does rely on the tried and true ideas of the genre, it does them well. The massive melee in one of the school buildings is a case in point. We know there’s going to be a fight, but it’s done with a particular humor that almost makes fun of the gags it’s making. Better, there are some truly wonderful moments that don’t fall into genre normalcy, like Dave riding behind a truck on the highway, with the truck driver pacing him and giving him hand signals to indicate his speed. If there is a weak point, it’s Dave pretending to be Italian to woo Katherine. This never ends well, and it doesn’t here. But even in this, it ends appropriately, and Dave seems to sort of learn a lesson from it by the end.

Breaking Away is a film that rises far above its genre and infinitely far above the standard ideas of a sports film. It’s fun, funny, touching, and damn good.

Why to watch Breaking Away: Underdog stories aren’t usually this good.
Why not to watch: Dave’s Italian accent.