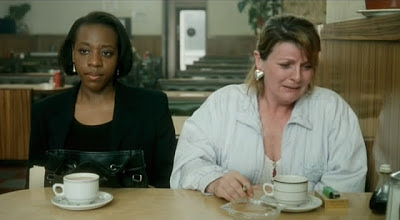 Mike Leigh’s Secrets & Lies is the second film in two days to completely blindside me. I knew virtually nothing about it going in, and now, having seen it, I’m not sure how it passed completely under my radar. I mean, this is a film that nabbed five Oscar nominations, and those nominations were in real categories. It has a remarkably simple premise and spins it through the lives of real people, producing something startling and beautiful.

The story is deceptively simple. A young black woman with the amazingly awesome name of Hortense Cumberbatch (Marianne Jean-Baptiste) has recently lost her mother. She was adopted as a child. With both of her parents dead, she decides it is time to look up her birth mother. See, pretty simple premise.

Of course, that premise offers a lot of possibilities. And it gets particularly interesting when we realize exactly who Hortense’s mother is. The woman in question is Cynthia Rose Purley (Brenda Blethyn), who is quite possibly whiter than I am. In fact, it would seem that Hortense and Cynthia have absolutely nothing in common. Hortense is an optometrist and almost disturbingly middle class. Cynthia is, to coin a phrase, downwardly mobile, works in a factory, and lives with Roxanne (Claire Rushbrook), her other out-of-wedlock daughter.

As complicated as this might be, of course, it’s far more complicated than that. Cynthia, who comes across as uneducated, perhaps a bit dumb, but sort of vaguely sweet, is constantly perplexed by the belligerent and brutish Roxanne. When she does finally meet Hortense and gets over the initial shock of having a black daughter, she begins to gravitate toward the daughter she adopted off. It’s completely natural, since it’s evident right away that Roxanne resents her mother and Hortense is simply glad to have her birth mother suddenly in her life.

In all of this, we also spend a great deal of time with Cynthia’s younger brother Maurice (Timothy Spall, best known as Peter Pettigrew from the Harry Potter films) and his wife, Monica (Phyllis Logan). Maurice and Monica are childless, and put most of their efforts into dealing with Roxanne, helping out Cynthia, and dealing with Maurice’s photography business. Monica appears alternately decent and manic, and we learn eventually that the reason they don’t have children is because Monica is unable.

Once we have all of the relationships established, and once Cynthia and Hortense begin meeting surreptitiously and learning to like each other, the natural escalation is to bring Hortense into the rest of the family. This happens with Roxanne’s birthday party. Hortense comes under the premise of being one of Cynthia’s work friends. Cynthia, well-meaning but ultimately not very bright, naturally lets slip that Hortense is her daughter, and everything—all of the petty resentments and problems, all of the past burdens and hurts—bubble up to the surface. It’s truly glorious in how close this seems to reality and in how real the pain is in these people.

Where Secrets & Lies truly succeeds is in not milking the story for its most obvious play for sympathy: racism. It would certainly have been the natural path to take to have one or more (or all) of the Purley family be intensely racist and to force poor, unsuspecting Hortense into that reality. But this is not the case. The issue of Hortense’s presence isn’t made any different by her skin color. No, it’s more that she exists at all that takes people by surprise, and beyond the initial shock, very little is made of the race issue. It’s almost shocking that it’s not there. It’s also a genius move. It could be an added complication, but instead, the mere fact that Cynthia gave up one daughter sight unseen and kept another is enough tension to drive the entire film and the motivations of all of the characters. The tensions are completely believable throughout. There’s a great deal of tension between Cynthia and Monica; they resent each other. In particular Monica goes out of her way to flaunt Maurice’s success compared with Cynthia’s relative poverty.

The other thing that really works here is that everyone here, with the possible exception of Roxanne (and eventually even her) is really easy to like. These are decent people. Even Cynthia, who has a penchant for calling everyone “Dawlin’” or “Sweet’art” to the point of annoyance, is too dippy to really be unlikable. Because everyone is so understandable and likable (even Roxanne isn’t completely terrible and her immediate and constant annoyance with Cynthia is kind of understandable at times), this becomes a very human story, one easy to relate to.

Secrets & Lies isn’t, perhaps, the happiest film in existence, but it’s happy enough. It resolves beautifully and in a most satisfying way. There feels like real catharsis here, and that’s rare enough to be noteworthy. In short, I’m genuinely surprised at how moving such a simple story can be. It helps when it’s this tightly written and this beautifully acted throughout.

Why to watch Secrets & Lies: A simple story as well told as possible.
Why not to watch: Cynthia’s voice and constant word repetition can be really irritating.