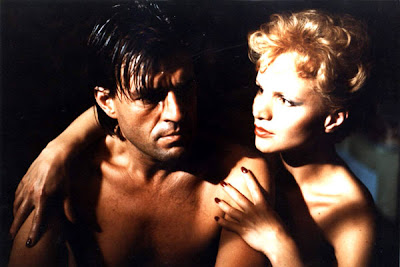 Paul Verhoeven’s De Vierde Man (The Fourth Man) is what critics would call “a sexy, stylish thriller,” and it really is that. It’s also very strange. Pushed in one direction, this is a modern film noir. Pushed the same distance in a different direction, it’s a supernatural thriller. As it stands, it’s most definitely a psychological thriller with a significant dose of noir elements. But it also deals with religion, fate, and premonition.

Gerard Reve (Jeroen Krabbe—the character is named after the author of the book this film is based on) is a somewhat alcoholic author starting to be bothered by bizarre dreams. He heads off to the south of Holland for a speaking engagement at a literary society, mostly because it’s evident that he needs the money desperately despite his success as an author. The talk goes pretty well, but he discovers himself drawn to a woman named Christine Halslag (Renee Soutendijk) who has the unnerving habit of filming him with a hand-held camera. Christine can be generously described as “striking” and more realistically described as “weird looking.”

Regardless, Gerard goes home with Christine for a night of sex, in part because Christine had him booked in a hotel of which he had a disturbing vision. That night, he has a horrifying dream of Christine (ahem) unmanning him with a pair of scissors. The next morning, he discovers that she runs a salon and she gives him a haircut, wielding the scissors in much the same way she did in his dream.

Christine spends the morning in mourning for the fact that Gerard is heading back to Amsterdam, so he agrees to stay with her. There’s more sex on the way as well as some frank conversations about their sex lives, or, rather, her sex life. At one point, Gerard intercepts a letter from her other lover, a man named Herman (Thom Hoffman). He immediately falls in love (or at least lust) with Herman, which causes a particularly disturbing vision in a church. Regardless, Gerard uses what he learns from the letter to pretend to read Christine’s mind, which leads to her complaining about Herman’s inability to satisfy her sexually (he’s a bit…speedy…for her tastes). So Gerard convinces her to bring Herman to her home where Gerard can then figure out what’s going on between them. And, one presumes, where he can make both Christine and Herman his sexual conquest.

Through all of this, Gerard has extremely lucid hallucinations, a couple of which I have already mentioned. The more the film goes on, the more it becomes evident that Gerard’s hallucinations are less mental freakouts and more precognition. That which he sees begins to come true. These hallucinations are consistently gory and violent and frequently sexual. The plot thickens when Gerard opens a locked chest in Christine’s house and discovers three films, each labeled with a man’s name. He watches them and discovers that Christine has been married three different times, and it’s soon evident that she’s also been widowed three times.

The bisexuality of Gerard is there for the hallucinations and evidently a much larger part of the book. Here, it’s more or less a distraction from the rest of the story going on. There’s no particular reason why Gerard needs to be bisexual in this, and nothing is really gained that I can see by having him lusting after Herman. It just seems to get in the way of everything else—like it was put here as a sop to the original story without it having anything really to do with the rest of the story being told. Even the scene near the end when Gerard seduces Herman in a mausoleum seems like it was put here just for the sex rather than anything else. That the mausoleum also contains the cremains of Christine’s former husbands is sort of beside the point.

What we end up with is a film that wants to add some sex and psychic stuff to the film noir style. For the most part, it does, but it does so sort of unevenly. It’s definitely stylish and it contains more than its share of sex. The problem it faces is that it is extremely ambitious, perhaps too ambitious for its own good. When the climactic moment happens, I fully expected Gerard to wake up from yet another reverie and was almost disappointed when it didn’t happen.

De Vierde Man isn’t a bad film, but I’d be hard pressed to call it a great one. For a film that plays this much with odd visions and the like, I’d have much preferred that The List had included the very underrated Dead Again. Either that, or I’d have much preferred for Verhoeven to go the full horror route and really bring the creeps. As it stands, it either goes too far in one direction or doesn’t go nearly far enough.

Why to watch De Vierde Man: It combines both film noir and horror into a cohesive whole.
Why not to watch: Its ambition might leave some viewers wondering what it is.