To Coin a Phrase 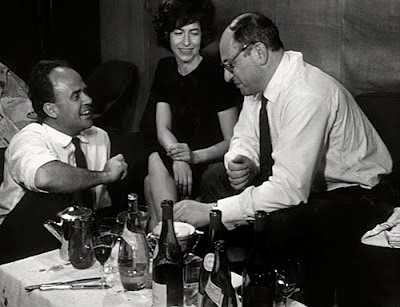 There always has to be a first. When you look at a given style of film or a particular movement, there’s a first. There are times when you can trace the genesis of a new style to earlier films that lead up to it, but even in these cases, there’s still a film that is the one that starts the movement. With the French style of cinema verite, that film in question is the one that coined the term, Chronique d’un Ete (Chronicle of a Summer).

Almost as if to forestall anyone going back and looking for the influences of this unique documentary, our filmmakers Edgar Morin and Jean Rouch announce at the start of the film the previous films that they find themselves most indebted to. From there, they announce their basic premise: they will film real people discussing their lives. This, they feel is a grand experiment. Their hope is to determine if people can truly act and speak naturally in the presence of a camera filming their every move and facial expression. For this, they created the term cinema verite, or “film truth.”

For the first half of the film, Chronique d’un Ete concerns itself with asking a variety of people about their lives and, rather importantly, about their happiness. We follow a few people for part of their day. We see people working, and we see them in conversation. At it soon becomes evident that almost no one, or at least most of the people that we are allowed to see, are experiencing some sort of personal malaise. There’s no way to tell, of course, if that was a prevailing idea or if we were simply given only those people to make a specific point.

Around the middle, things change. The film can’t help but be not only a product of the filmmakers and a product of France, but it is also necessarily a product of its time. Many of those we have seen and listened to are gathered together to speak about the world of 1960. This includes the French conflict in Algeria and the Belgian war in the Congo. As two of the people in the group are native Africans, it provides an interesting perspective on what is happening and of general opinion. It’s here that we learn that Marceline Ivens, our first subject and the assistant of the filmmakers, is Jewish and was interred in a concentration camp during World War II, which colors her opinion of the African conflicts.

There is also a very strange self-referential quality to the film. Morin and Rouch talk about the film on the film. They tell us that they’re going to switch to talking about current events. They explicitly tell their subjects that they are going to talk about things they talked about earlier on film. I suppose it was inevitable to avoid this in general, but I think I may well have preferred this to stay off camera. Eventually, once we get toward the end, the subjects of the film are brought in and allowed to watch what’s already been filmed, and in a meta-moment, they are filmed watching themselves on film.

Yeah, whatever. The first coherent and cohesive review I ever saw on Chronique d’un Ete was from fellow blogger Adolytsi, who posted a few days ago. I made the decision not to read the review until now, although I did look for the score at the end before this. The two of us agree down the line—the biggest single problem with Chronique d’un Ete is that it’s dull as all hell. I’m not entirely sure how this could have been made interesting without some sort of artificial plot, or at least something that created more of a conflict than “I’m kinda sad sometimes.” I understood exactly what they were going for in the first five minutes, and was happy to see the experiment and the results of same for maybe 30-45 minutes, and even that was starting to stretch my patience more than I’d normally care for it to.

Beyond that, it’s also ridiculously self-important. After the internal screening at the end, everyone talks about how important or meaningful or whatever they found the film. And then Edgar Morin and Jean Rouch spend a couple of minutes talking about how important they think their film is. Okay, it’s important. And I pretty much don’t care anymore. At a third of the length, it would be fascinating. At this length, it’s too damn much.

Why to watch Chronique d’un Ete: One of the most historically important films in history.
Why not to watch: At 90 minutes, it’s longer than it needs to be.