A Hot Time in the Old Town Tonight

Film: In Old Chicago
Format: DVD from NetFlix on laptop. 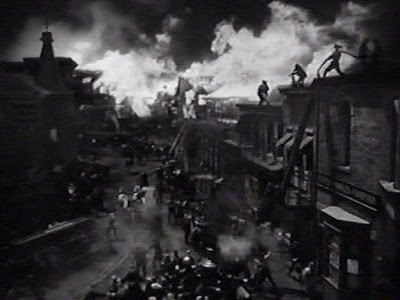 I’ve set up my NetFlix queue to be frontloaded with all of the “very long wait” films at the top. What this means is that I typically get one of those films because there are so many of them. That’s great, but it also means that what shows up on a given day is something of a crapshoot. I’m never sure what I’m going to get, and sometimes I get something that’s not really what I’m in the mood to watch. Such is the case with In Old Chicago, a bizarre little film that combines a lot of plots and a spurious legend.

What spurious legend? That’s not too difficult to figure out. The film takes place in Chicago in the 1870s and the main characters last name is O’Leary. Think there’s going to be a fire? Think it might get started by a cow kicking over a lantern? The shame of In Old Chicago is that it isn’t specifically about the Chicago fire, because that might have been more interesting and certainly would have been a hell of a lot less misogynistic.

In the 1850s, the O’Leary family heads to Chicago to make their fortune. Mr. O’Leary dies when he’s thrown from the family carriage while racing a passing train. The O’Leary family sans pater reaches the town and it’s not long before Molly O’Leary (Alice Brady) soon beings a laundry business to make ends meet. She also raises her three sons on her own. These boys are Jack (Don Ameche), Dion (Tyrone Power), and Bob (Tom Brown). Jack is a crusading lawyer of the type destined to be poor but honest and forthright. Dion (pronounced DIE-on) is a gambler and a rakehell. Bob? Well, Bob isn’t much of anything. He’s there to fill out the cast, more or less.

Once Mrs. O’Leary has established herself, we fast forward a number of years to get the boys of age and discover their personalities. While Jack toils away trying to win charity cases, Dion works scams to bring in money. He also gambles and tends to rig the games so that he wins. For his part, Bob falls in love with Gretchen (June Storey), a simple German milkmaid. We discover their love for each other at the same moment we learn that Mrs. O’Leary’s cow has a kicking problem.

Dion gets his own love interest in Belle Fawcett (Alice Faye), a saloon singer and the apple of the eye of Gil Warren (Brian Donlevy), a crooked saloon owner. Dion decides to romance Belle and use her for a ploy to get a valuable street corner away from Gil. He does, and eventually gets Belle to fall for him. Rather than fight, Gil decides that he’d be better off running the city and decides to run for mayor. Wanting to control the city himself, Dion uses surreptitious means to force Jack to run and then rigs the election so Jack wins. Believe it or not, all of these leads up to the Chicago Fire, although it gets there pretty obliquely.

Bluntly, the fire is the reason to see this. The first hour or so of the film is pretty dippy and extremely melodramatic. Dion is sort of a loveable rogue, although in a lot of places he’s really just a good looking asshole. Jack, a reformer and near-perfect, is barely in the film for large chunks and is more or less there only as an occasional foil for Dion. No, it’s the fire that more than likely put people in the seats in 1937 (remember, this is two years before the burning of Atlanta in Gone with the Wind), and for its time, this is a pretty impressive piece of cinema.

A lot of the rest of this is pretty egregious, though. This is particularly true of Dion’s relationship with Belle. Moved forward to the present time, we’d see Dion brought up on charges multiple times. About half of their relationship (literally) consists of her throwing things at him and him grappling her, holding her down, and force kissing her until she acquiesces. It’s played off in the film as either his great desire for her or as him wanting her to love him for ulterior motives (both of these happen roughly equally), but it’s unhealthy at best and damned abusive at worst.

Other interesting bright spots are the presence of the uniquely-voiced Andy Devine as the awesomely named Pickle Bixby, Dion’s right-hand man and an appearance by the supremely ugly character actor Rondo Hatton as Gil Warren’s bodyguard. But these are small bright spots and they can’t cover for obvious melodrama and misogyny.

It’s difficult to recommend this film at all, but the fire, filled as it is with reversals, back-stabbing, and melodrama at its best (or worst) is worth it. I’d almost recommend fast forwarding until the cow kicks over the lantern, because it really is pretty great. Otherwise, you need to suffer through four pretty lackluster musical numbers that are thrown in for no reason and a plot you can see coming from a mile off.

Why to watch In Old Chicago: The fire is worth the price of admission.
Why not to watch: There’s a lot of dross before we get to the fire.