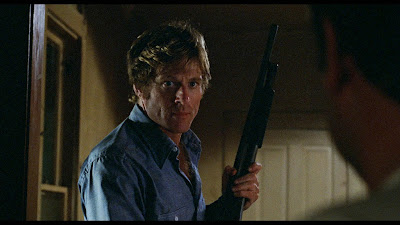 I imagine for a particular type of actor, playing the crusading hero is kind of fun. Personally, I’d rather play villains because they tend to get the best lines. But at a particular stage in a career, I guess a lot of actors want to look back at something they did that might have had more of an impact than just cackling madly and chewing scenery. Thus we get Robert Redford’s performance in Brubaker where he plays the role of a crusading prison warden.

We don’t know this initially, by the way. The film begins with Henry Brubaker (Redford) riding on a bus to Wakefield State Prison in an unknown (but likely Southern, based on accents) state. For all we know, he’s just one of the inmates. What he finds is a place rife with disturbing behaviors, terrible conditions, and a great deal of illegal activity from the higher-ups and many of the prisoners. The general population is given sub-standard food that is rife with maggots, sleep in terrible conditions, and are farmed out as slave labor for local businesses. The prisoners who act as trustees actually live pretty well. The food grown on the prison farm is sold off to businesses at a profit, and the food the prison buys for the inmates is also sold for a profit. When one of the death row inmates (played by Morgan Freeman in his first credited big screen role) threatens the life of another inmate (David Keith), Brubaker blows his cover and starts reforming the prison.

Of course, for as much as the system needs reforming and as much as the general population of the prison both wants and needs the reform, those who have power and are profiting from the current set up are none too pleased with Brubaker’s new broom ideas. The trustees, who have a great deal to lose, begin sabotaging things around the prison. Crops are sprayed with kerosene. The prison’s cattle, intended to feed the prisoners, start getting poached by the locals. Those locals, including mill owner C.P. Woodward (M. Emmet Walsh) start to put pressure on Brubaker to go back to the old ways. Even those who continue in their positions, trustees Roy Purcell (veteran character actor Matt Clark) and Dickie Coombs (Yaphet Kotto) are resistant of the changes because it reduces their own power and authority.

Eventually, Brubaker finds out that there are a number of unmarked graves on the prison grounds, places where prisoners whose deaths went unreported due to abuse, starvation, or other issues, were buried. When one of the trustees (Tim McIntire) realizes that this might get him accused of a number of crimes, he bolts, setting off a chain reaction that leads us to and through the third act.

So before I get too deep into what I think about this, I need to vent for a minute. Brubaker is a fictional story, but it is heavily based on a novel by a guy named Thomas Murton. Murton was a warden at an Arkansas state prison, and much of what happens at the end of the film comes from his real-life experiences. Sure, this is fictionalized, but how does a film based heavily on a novel that was in turn based heavily on real experiences show up as a candidate for Best Original Screenplay? Murton even worked as a technical advisor on the film!

The biggest plus going for Brubaker is the amazingly deep cast. In addition to the people mentioned above, we have Murray Hamilton’s final big screen appearance, a nice role for Jane Alexander, Everett McGill (immediately recognizable as a “that guy”), Wilford Brimley, and an appearance by David Harris, who I always like seeing in a film. Brubaker also allegedly contains Nicolas Cage in a non-speaking role, his first.

I get the point of the film. This sort of film crops up pretty regularly, after all. Any crusading type walking into a bad situation with the goal of changing it for the betterment of everyone is essentially Brubaker in a nutshell. It’s Erin Brockovich or Stand and Deliver when it’s done well. The problem with this sort of film is that it slips very easily into melodrama. Brubaker himself easily becomes someone larger (and better) than life, right in everything he does. The people who stand against him become venal and evil because that’s the easiest way to look at them. One of the things that Erin Brockovich did right was make her somewhat unlikable, even if that made the movie harder to watch. Here, there’s no place for Brubaker to have a fault more serious than caring too much or trying too hard. In short, the premise is better than the film itself, which wallows in its own importance.

So is it good? Yeah, it is. It would have to try pretty hard not to be with this cast. But Brubaker is a one-and-done film. There’s no reason to watch this a second time, no insights into the human condition or special outrage that needs to be repeated to get the message. It’s worth seeing, but it’s only worth seeing once.

It’s worth noting that while this is a solid prison movie, it doesn’t hold a candle to director Stuart Rosenberg’s magnum opus Cool Hand Luke.

Why to watch Brubaker: Get your outrage on.
Why not to watch: It’s preachier than it needs to be.