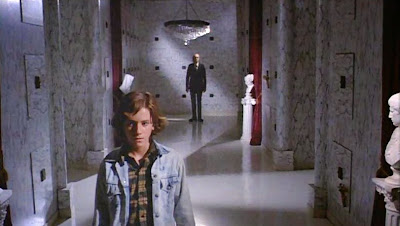 Everyone had holes in his or her viewing history. The main reason I started this blog was to fill in a bunch of those holes and to do so in a way where I couldn’t weasel out of watching something. That’s the reason for the horror lists, too. I caught up on a few biggies going through the 1001 Movies list, but there are some genre classics that didn’t make that list. It’s always good when I can knock one of those bona fide classics off the list. In this case, that classic I’d never seen is Phantasm.

Oh, I’d heard all about it, of course. The most famous parts of the film are the presence of a character called The Tall Man (played by the awesomely named Angus Scrimm) and the flying silver ball that kills whatever it strikes. What I didn’t know was just how weird this film really is. It’s the sort of film that doesn’t really make sense no matter how one looks at it. It just gets crazier and crazier as it continues. I should have realized this when I discovered it was written and directed by Don Coscarelli, who is the man behind The Beastmaster, Bubba Ho-Tep, and John Dies at the End.

We open with a scene where a guy who looks like he belongs carrying an amplifier around for Iron Maiden having sex in a graveyard. The post-coital bliss is broken when the girl he’s with pulls out a knife and stabs him and then turns into an old guy, who we’ll be introduced to later as the Tall Man. Yep, that’s Phantasm, folks; heavy metal roadies getting killed by shapeshifting, transgendered geriatrics. And while that’s plenty weird, it’s certainly not the weirdest thing we’re going to see in this film.

Anyway, we flash forward to the funeral. It turns out the dead guy is the friend of our three main characters. Jody (Bill Thornbury), who looks like David Hasselhoff lite, was the victim’s friend. He’s also the older brother of Mike (A. Michael Baldwin), who is roughly 14 and troubled, mainly by the recent death of his and Jody’s parents. Mike spies on the funeral and sees the Tall Man single-handedly put the coffin into the back of his hearse once the mourners have left.

Our third main character is Reggie (Reggie Bannister), who also looks a lot like a roadie. In fact, with his male pattern baldness, ponytail, and white suit he wears as an ice cream man, Reggie looks a hell of a lot like a predator. Regardless, we’re supposed to like Reggie, and despite the fact that he’s got a little bit of Clint Howard in him, Reggie is one of the more interesting and competent characters we have. Reggie helps out Jody with Mike when he can, because that’s the sort of guy that Reggie is. He just looks like a pervert.

So after the funeral, Mike starts experiencing a number of weird things. He investigates the funeral home in the cemetery on his own and discovers a number of things. He learns that the weird noises he’s been hearing are mutant dwarf things that wear hooded cloaks like Jawas. He also has an encounter with the silver sphere that misses him and hits one of the Tall Man’s minions with surprisingly gory results. In his escape, he manages to cut off a few of the Tall Man’s fingers, which leak a yellow fluid and that are still alive after being severed. It’s with these that he convinces Jody and Reggie that things are far weirder than anyone supposes.

Naturally, this means that the three have to do some Scooby-Doo style investigating up at the funeral home, and all sorts of crazy stuff happens. We learn that the dwarfs are actually the reanimated and shrunken bodies of the recent dead and that somewhere in the funeral home is a portal to another planet where the dwarfs are used as slave labor. Or something. And the sphere comes back, as does the Tall Man and his alter ego as the sex-starved Lady in Lavender (Kathy Lester).

And I don’t have an explanation for any of it. It’s just so much like a fever dream and it goes so many places. Actually, I do have an explanation that makes a great deal of sense, but I’d rather not spoil this for anyone who hasn’t seen it, so I’ll work it under a spoiler tag.

We learn at the end of the film that all of this has been a dream of Mike’s to cope with the reality that Jody was killed in a car accident shortly after the death of their parents. Reggie, who gets stabbed by the Lady in Lavender, is actually alive and taking care of him. This explains a lot. It explains why every time Mike is told to stay somewhere by Jody and he doesn’t Jody is never upset with him. It explains all of the surreal moments of the film like the alien planet and the dwarfs. In fact, the dream angle explains everything, up to and including how perfectly the trap laid for the Tall Man at the end works and why, as the Tall Man attacks him in his home, Mike finds it worth his while to simply walk around calmly before escaping.

Except the actual ending where Mike discovers the Tall Man in his room and is dragged through his bedroom mirror by the dwarfs. So what can explain that? Mike is actually insane and all of this is both a dream and his waking reality, but it’s not a reality that touches much on ours. Insanity cures the same ills as dreaming and also makes the ending understandable.

Because of how weird it is, Phantasm is difficult to judge. I’d have loved to see the driller ball used more. It shows up only twice, and its second appearance is a real disappointment. The movie is so unfocused that it’s difficult to take very seriously. It’s also not nearly as scary as I expected it to be. After all the hype and the critical praise that it’s one of the scariest films ever made, it left me disappointed on that front.

It is, however, great in some real ways. It’s completely insane all the way through, and while a lot of it doesn’t make sense, it’s weird enough that it needs to be seen to be believed. The acting is surprisingly good all the way through, too. In a lot of ways, it suffers from its own ambition. If it had concentrated on just the Tall Man and the driller ball, it would have been more streamlined and probably a lot scarier, since they are by far the scariest elements of the film. The whole weird dwarf/extra-planetary slavery stuff feels really out of place. But I tend to like ambition in films, especially in goofy horror films that seem like the opposite of ambition.

For this, I respect Phantasm. It’s worth seeing because it’s a classic and because it tries really hard to transcend its genre. It fails in the main, but it’s a hell of an attempt.

Why to watch Phantasm: It’s a classic of the genre.
Why not to watch: No matter how you try to make sense of it, it doesn’t make sense.