Film: The Train
Format: Streaming video from Hulu+ on laptop. 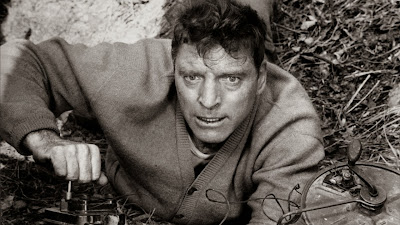 The Train is the third war film I’ve watched in as many days. It occurred to me halfway through the film that in addition to watching three war films, I’ve hit three of the main branches of military service. Where The Sand Pebbles was a Navy film and Twelve O’Clock High concerned the Air Force, The Train is firmly rooted on the ground. It’s a film that is firmly involved with the French Resistance rather than any Army. It’s an unusual film in a lot of ways. It’s other difference from the two I’ve watched recently is that it focuses almost exclusively on action, giving us chases, air attacks, and explosions at a solid clip.

The plot is almost high concept in its simplicity. Allied troops are rapidly approaching Paris in 1944. As the Allies advance, Colonel Franz von Waldheim (Paul Scofield) concerns himself not with his troops or the retreat of materiel, but of the many art treasures looted from French museums. It is his intent to smuggle as many of these back to Berlin as he can, both for cultural reasons and because such paintings can effectively be used as currency in the waning days of the war. A museum curator learns of this plan and tells a local Resistance group headed by train engineer Paul Labiche (Burt Lancaster). This particular group has been ground down over the course of the war and has only three members left. They decide that despite the monetary and cultural value of the artwork, they don’t have the manpower to stop it.

As the train laden with art gets ready to leave, it is sabotaged by its old engineer, Papa Boule (Michel Simon). He’s caught immediately and summarily executed. The death of the old man galvanizes Labiche and his team. They decide to do everything they can to slow down the train and prevent it from getting to Germany.

What happens is an elaborate ruse. The train heads off, but through a deception involving a number of train stations along the way, instead of heading to Germany, it routes back to Paris where the Allies are coming closer to liberating the city and thus rescuing the art. Essentially, sa the art train approaches each town, workers put up a temporary sign for the town the Germans on the train think they are at. Eventually, as the train loops back to Paris, Labiche disconnects the engine and sends it racing forward where a pre-planned wreck is waiting to total the engine. He and his team disconnect the cars with the art first to protect it.

Of course, it all comes to a final confrontation. Labiche finds himself wounded and alone, his other conspirators rounded up and killed. As the tracks are repaired for the train to once again head to Germany, civilian hostages are put on the train as an additional protection. But that showdown is coming, and it comes to a moment that is the sort of reason that war films are made.

The main thing that The Train has going for it is that it’s pure action from start to finish. It has all the air strikes, shootings, and other military action that is typically expected in a film like this, and director John Frankenheimer did some of this for real. The train collision, for instance, is the real thing. There are lulls, of course, but the film moves along at a solid clip and never lets up.

The film doesn’t pull any punches, either. Often, it feels like classic war movies kill off a character or two to remind the audience that it’s a war film but leaves most of the principle cast intact. The Train is willing to kill of members of the cast at a solid clip. Some we come to know and like while others show up, do something to help sabotage the train or turn it back to Paris, and then die as a matter of course. I’m not keen on watching these characters die, but it does serve to make the film that much more realistic. The true horrors of war and the human cost are not glossed over here.

Seriously, and I’m not that prone to hyperbole, there’s no reason that The Train should have been this difficult for me to find. I located it on Hulu; I’m honestly not sure if it’s free Hulu or Hulu+. This is a film that has sadly been forgotten, and it’s far better than that. I wasn’t sure what I was getting into here, but The Train is surprisingly badass. I’m glad I had the chance to see it. It’s unfairly been forgotten.

Why to watch The Train: A gripping story about an unusual episode in World War II.
Why not to watch: This should not be that difficult to find.