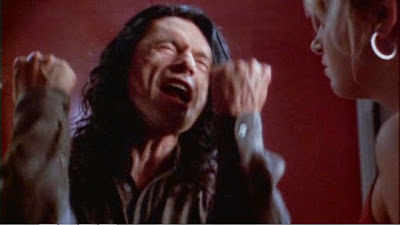 This is the fifth in a series of monthly reviews suggested by Nick Jobe at Your Face.

I make my composition students do presentations on the last day of class. They hate it, but I think it’s good to give them the experience of speaking in front of a room. Also, it makes for an easy class for me. One piece of advice I give them is that those people who are truly terrified of speaking in front of a room should volunteer to go early and get it over with. After doing one-third of Nick’s choices, I had to wonder why I wasn’t taking my own advice. Of the movies Nick has selected for me, there are some I’m interested in seeing, some I have no opinion of, and one that I was actively dreading. Knowing that anticipation would just get worse if I didn’t do something about it, I put The Room at the top of my queue. And here we are.

The Room was written, produced, and directed by its star, Tommy Wiseau. He evidently created a company (Wiseau Pictures) for this and had two logos made, because two different versions appear before the film. That right there is a small indication of the sort of competence and rational decision making that leads to films like The Room. I’d call this film Wiseau’s brainchild, but it’s much more his brain afterbirth. Anyway, I digress.

The Room is the story of Johnny (Wiseau) and his “ultra-sexy” girlfriend Lisa (Juliette Danielle). There’s something that doesn’t look right about her in this film, and I’ve discovered what it is. Our Lisa is not a natural blonde. Ms. Danielle looks better in her natural hair color. Anyway, Johnny and Lisa appear to be a happy couple. Johnny works in a bank where he evidently saves the bank a lot of money. Lisa doesn’t do much of anything but live off Johnny and eventually decide that she’s far more interested in his best friend, Mark (Greg Sestero).

That’s really the whole main plot of the film. Johnny and Lisa are supposed to get married, but Lisa decides she’d rather be with Mark. Mark is conflicted because he’s attracted to Lisa, but Johnny is his best friend. We know this because the fact that Johnny is Mark’s best friend is repeated to us every 12 minutes or so like a snooze alarm.

But this is not all that The Room encompasses. Oh, heavens no! There’s so much more going on here, almost none of which is actually explained. We learn that Lisa’s mother Claudette (Carolyn Minnott) “definitely” has breast cancer, which she knows because the tests came back. We never really learn what Claudette does for a living either, although she is very concerned the Lisa marry Johnny for her future financial stability. There is also Denny (Philip Haldiman), who lives near Johnny and Lisa. Johnny pays for Denny’s life because he thinks of Denny like a son. Denny owes money to a drug dealer for some unexplained reason. Denny also apparently wants to have sex with both Johnny and Lisa.

And there are other people who show up at Johnny’s and Lisa’s place for sex. And one of their friends is a psychologist. And everyone except Johnny is able to intuit that Lisa and Mark are doing the horizontal boogie almost at will. And the men play football while wearing tuxedos. And at one point, Mark shaves off his beard.

So the story is a mess and unintelligible. The dialogue, though, needs to be heard to be believed. I can’t do it justice and I’m not going to try. Suffice it to say that every conversation goes in every possible direction at the same time. There is rarely much connection from one line of dialogue to the next.

So I get it. I get why people go crazy over this terrible affront to all that is good and right in the world of film. I’ve watched it, and there’s a part of me that wants to pop the disk back in the spinner to watch particular scenes over again, to analyze the badness and to really revel in it. I get it completely.

And it makes me mad.

It makes me angry that this talentless douchecanoe named Tommy Wiseau has a name and something akin to a reputation. Admittedly, what reputation he has is as the worst actor/director/producer since Ed Wood. The fact that he has that reputation is what angers me, though. The world is filled with people who have a genuine talent and who can’t get a break. But rather than seek out small films that have something meaningful to say, instead we decide to celebrate this titanic lump of a human being specifically because he’s terrible at everything involved in making a film.

This is the culture we live in. We live in a world where someone like Kim Kardashian, whose talent is evidently a sex tape and a large ass, is a known “personality.” I’d go so far as to suggest that she’s known specifically because she’s empty and talentless. Spray-tanned disease goblin Snooki probably has an entourage, and she does precisely because she’s a vapid know-nothing. Tommy Wiseau is the movie equivalent. He’s known specifically because he’s completely incompetent at what he chooses to do. And there are almost certainly hundreds and thousands of talented filmmakers who will never be known because this lumpy bastard needs his 15 minutes of fame. Rather than seeking out what is good, what is valuable, what is worth our time, we celebrate the terrible, the worthless, and the pointless.

I know that giving this guy one additional minute of attention is taking away from a director or actor who deserves it more. And I am angry because there’s a part of me that wants to watch this again and experience just how fucking terrible it is and point and laugh at it. Other people deserve better. Our society deserves better. We should be above this, and we’re not. Hell, I’m not any different.

Nick, I can’t give you full credit on this one but I will give you a half point because I really do understand. You’re 4 for 5 now.

Why to watch The Room: It’s a hysterical train wreck of failure.
Why not to watch: It’s an indicator of why we suck as a society.