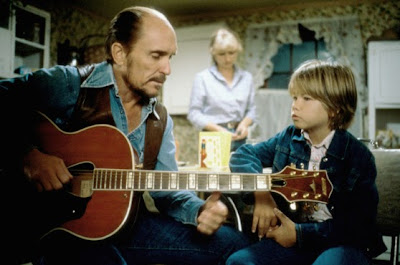 After the last three reviews that I’ve posted, I have to say I wasn’t especially pleased when I cracked open the NetFlix envelope and found a movie called Tender Mercies. I know I shouldn’t judge a book by its cover or a film by its name, but sometimes it’s impossible not to. Hell, I was right about Terms of Endearment and Crimes of the Heart, after all. Knowing that I need to turn around NetFlix discs as quickly as possible just to keep up, I resigned myself to a week of films I didn’t like much and was pleasantly surprised by what I got from this one.

Tender Mercies isn’t really a film that has a plot running through it. Instead, it’s a character study, and it’s pretty effective one. Mac Sledge (Robert Duvall) is a country singer who has more than reached the end of his career. Divorced from his wife, a singer, Mac has found himself nursing a hangover, broke, and abandoned in a motel in the middle of nowhere in Texas. To pay for his room, he agrees to help out the proprietor, a young widow named Rosa Lee (Tess Harper), who runs the motel and gas station with her young son, Sonny (Allan Hubbard). After a few days, with his room paid off, he asks if he can stay. Rosa Lee agrees, offering him room, board, and the princely sum of $2 per hour.

Over time, Rosa Lee and Mac are married. It’s evident that Mac has decided to give up everything in his former life—the music business, drinking, everything. Kind of. He gives up drinking without much issue, but he continues to write songs on his own. When his ex-wife Dixie (Betty Buckley) arrives in a nearby town, Mac goes to see her. He offers one of his songs to her manager (Wilford Brimley), and has an angry encounter with Dixie. When she rejects the song, he drives off, away from his new family.

What is slowly revealed over the course of the film is that Mac is a complex man with a troubled past. These things are slowly revealed to us. We learn that he has a grown daughter named Sue Anne (Ellen Barkin) who he has had no contact with since before his divorce with Dixie. We learn that despite his giving up drinking, he’s still driven by some demons from his past. His departure from his new family is short—he comes back, realizing that he’s where he needs to be. His biggest demon is his connection to the music industry. Half of him is happy to have it behind him and half wants nothing more than to have some of it back.

All in all, Tender Mercies is a sedate film because it’s about Mac and not about something going on around him. Robert Duvall inhabits this role in a way that few people could. This has always been Duvall’s strength as an actor: he never really looks like he’s acting. Instead, he’s inhabiting the skin of the character he’s playing. I’ve said in the past that I think The Apostle is his best work, but the more of him I see, the more I realize that there would be a great deal of difficulty for me in really making an ordered list. The man hasn’t had a bad performance that I’ve seen, and Tender Mercies is no different in this respect.

Another benefit here is the cast surrounding Duvall. None of the main roles are extraneous and all of them are important in some way. Tess Harper is completely believable as a young widow, maybe a touch faded or fading from her more youthful beauty but still pretty enough, relatively uneducated but not a touch stupid. The biggest surprise is Allan Hubbard, who never did another movie. It’s a shame, because he’s pretty natural and as good as or better than most child actors. It’s also a bonus that Duvall and Betty Buckley do a lot of their own singing. Buckley in particular has a solid country music voice.

As it happens, Tender Mercies is Bruce Beresford’s only Oscar nomination as a director, and I’d be hard-pressed to say that he didn’t deserve it. There are plenty of moments that work specifically because Beresford lets his camera linger on moments for an extra beat or two, allowing us to see the extra moment of reaction from one of the characters that sells the moment that has just happened.

If I have a complaint, it’s the frequency with which we’re exposed to country music throughout the film. It becomes a significant part of the environment here, which certainly makes sense given the characters and particularly Mac’s past. It’s not terrible, but it’s not my choice of music in general. It’s all well-performed, but it gets old quickly.

That’s a quibble, though. This is a solid film all the way through to the credits. The lion’s share of the credit goes to Robert Duvall, but he’s by no means the only thing here worth seeing.

Why to watch Tender Mercies: Robert Duvall. Do you need more?
Why not to watch: There’s a hell of a lot of country music in this one.