Heaven Knows Why I Watched 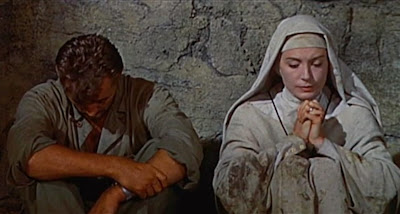 There’s something about war films from the middle of the last century that lend themselves to a religious message. In a way, it kind of makes sense. If we believed that we were in the right in the war, and I’d argue that we did have the moral high ground in World War II, it would make sense for us to assume that we had God on our side. Heaven Knows, Mr. Allison takes this to some extremes, with Deborah Kerr substituting for God in this case. We’ve got an interesting proposition here, something that is part war story, part religious screed, part Robinson Crusoe. In some sense, it’s not sure what it wants to be, which makes it less than the sum of its parts.

We start simply enough. A lone marine who eventually claims to be named Corporal Allison (Robert Mitchum) washes up on the shore of what initially appears to be a deserted South Pacific island. A little investigation reveals what appears to be a small church. This is inhabited by Sister Angela (Deborah Kerr), the only current inhabitant of the island. After their initial meeting, we learn a little of how the two have found themselves in this unique situation. For Allison’s part, he was disembarking from a sub when his ship started to draw fire. The sub captain essentially abandoned him and some other marines, leaving Allison to drift. Sister Angela’s story is a bit more convoluted.

Sister Angela arrived with an elderly priest just a few days previous. Their goal was to evacuate the small mission on the island rather than following their orders and heading to Fiji. Once they arrived on the island, they discovered that the Japanese had been there before and the mission (and island) had been abandoned. They also discover that their native rowers have abandoned them on the island, too. Shortly thereafter, the old priest dies, leaving Angela alone.

So, after brief introductions and the determination that our two characters will spend the rest of the film calling each other “Ma’am” and “Mr. Allison,” they discuss a plan to adapt Allison’s raft and attempt to sail south the 300 miles to Fiji. It seems like a good plan until the Japanese show up again, this time to establish a weather station on the small island. The two hole up in a small cave to avoid detection while Allison spends his nights collecting food so they can survive.

And then something happens that seems to be nothing more than a function of the plot. After a distant sea battle, the Japanese depart the island, leaving behind all of their supplies. This appears to happen specifically so that Allison can get drunk on sake and profess his love for Sister Angela, much to her chagrin. This drunken confession (with hints toward sex—they’re “like Adam and Eve”) causes Angela to run off in a rainstorm and become ill. And then the Japanese return with artillery, followed by the Marines. This leaves Allison in a position of needing to protect the nun and also do what he can to damage the Japanese position to make their own rescue much simpler.

In a sense, this is a propaganda piece years after it was necessary for World War II. In fact, it’s post-Korea and pre-Vietnam, making it a propaganda film without any real need for a propaganda piece. It doesn’t downplay the religious hammering, either. Allison eventually takes a course of action because he believes he has been given a sign from the Almighty, and proceeds to risk his life not simply for Angela’s safety but for his brother Marines as well. Now, I buy that, except for the sign from the Almighty. I’ve known a few Marines, and I don’t doubt their courage or their willingness to put their lives on the line. I’m just not convinced that the need any urging from Jesus’ dad.

The biggest mystery to me here is that Deborah Kerr was nominated for an Oscar and Robert Mitchum was not. This is far more Mitchum’s film than Kerr’s. She holds her own in the role, but it’s not a particularly challenging one. Her job is essentially to look bug-eyed when there’s shooting and to ooze sanctimony. Mitchum gets all the fun stuff, and as he always does, he handles it perfectly. Even better, he’s very much playing against type here, which is something I always appreciate.

Ultimately, Heaven Knows, Mr. Allison took me two days to get through. I didn’t enjoy much of it. Much of that is that it’s simply not very exciting or interesting. For all the attempt to make this a romance, there’s very little actual chemistry between the two main characters. I chalk this up to Deborah Kerr only because I’m a huge Mitchum fan. In truth, he probably bears more of the responsibility since it’s his infatuation with her that drives the end of the film, not the reverse. I also don’t think the plot works at all.

Actually, it’s probably because it’s preachy, and that never sits well with me.

Why to watch Heaven Knows, Mr. Allison: Robert Mitchum cures a lot of ills.
Why not to watch: Overt religious messages cause a lot of ills.