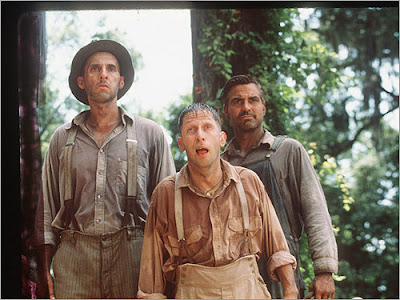 As always seems to be the case, reducing the Best Picture nominees to a spare five films leaves off a lot of potential great ones. Tops on that list for me is O Brother, Where Art Thou?. Remember the Titans, Requiem for a Dream, Memento and Billy Elliot seemed like possible candidates, as did Almost Famous and High Fidelity. Only in the strangest of years would films like Chicken Run, Pitch Black and American Psycho make the cut, but I can dream, right? On the foreign front, it’s a shame that the inclusion of Crouching Tiger pretty much eliminated In the Mood for Love from any contention, because that film is damn gorgeous.

5: Say goodbye to Erin Brockovich right away. There’s nothing particularly bad about Erin Brockovich but there’s also nothing particularly notable about it, at least from my perspective. It’s a fine film and a good story, but it’s really not much more than another David and Goliath battle that ends up with the ending that the audience wants. The portrayals are good, even though I kind of dislike all of the characters as depicted. It’s not a terrible film; I just think that 2000 had a lot of better ones. 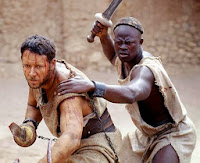 4: It seems like the most popular position for winning films and performances for me in these little rundowns is fourth, and that’s where I’m putting Gladiator, the eventual winner. Don’t get me wrong--Gladiator is a fine movie filled with solid performances, great action, and a lot of the trappings I want from a big action-y epic. But I don’t love the way it was filmed. I want to actually see the action, not get vague glimpses of the action as the camera shudders past. And, really, there were no surprises at how the story played out, were there? Made 30 years earlier, it would likely have a happy ending. In the more modern era, it settles for an appropriate and satisfying one. It’s good. It’s just not the best of its year.

3: I liked Chocolat a ton when I watched it. I think it might be a film that is almost impossible to dislike, but likability isn’t enough to make something the best film of its year. Chocolat’s problem is that it follows a path blazed by a lot of films before it. It’s a story we all know wrapped up in a different color paper. I stand by my assessment that it is perhaps the finest example of the “outsider slowly wins over everyone” story, but it really is just that story. It’s sweet, it’s pretty, it’s sexy and sensual and I’ll happily watch it again. It’s just not grand enough to be Best Picture.

2: Traffic is the other side of that chocolate Chocolat coin. It is expansive and ambitious and tries to do a lot within the confines of its running time. Even better, it succeeds at a great deal of what it attempts. The issue that Traffic has is that it delivers its message with the subtlety of a mallet to the kneecap. I like that it manages not only to indict drug traffickers as bad but also throws blame on the war on drugs as well. There’s enough blame to go around and Traffic is big enough and daring enough to try it. More subtlety and more finesse would go a long way here. I don’t need the film’s ultimate message in neon letters the way we get it here.

1: This leaves us with Crouching Tiger Hidden Dragon which has everything that each of the other nominees has on the positive side and none of their negatives. First, this is a lush and gorgeous film, a true pleasure to look at, just like Chocolat. It’s an engaging and interesting story with intrigue and double-crosses, just like Erin Brockovich. It’s epic in scale and gives us sword battles and martial skill, just like Gladiator. And it’s ambitious in its storytelling and satisfies completely like Traffic. And it does this without being heavy-handed, without annoying camera work or characters, and by giving us a beautiful and new story to enjoy. I think it’s the obvious pick not just for foreign language film, and I’m betting I’m not alone in that. Oscar had a chance to share the love with something really different this year, and they screwed the pooch.