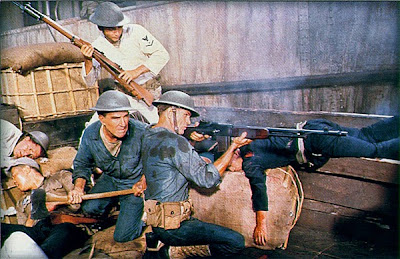 I have come to realize that a lot of the films I’ve been watching lately are extremely short. I do plan to watch everything on these lists, but watching too many short films leaves me in a position of only having the longest films left. When I did the 1001 List, I made it a point to watch a few of the longest films on the list I had left every month. It worked then and it should work now. With that in mind, it made sense to watch one of the longest films I could get hold of today in The Sand Pebbles, a very unusual war film and a very long one.

This is a very strange war film in that it takes place between World War I and II. In a real sense, it’s not an actual war film because there isn’t a great deal of war that happens with the main characters of the film. We start with machinist mate 1st class Jake Holman (Steve McQueen) who is in Shanghai attempting to get to his new ship, an ancient gunboat called the San Pablo, nicknamed the Sand Pebble by the crew. The ship is an American presence in China, where a great deal of trouble is brewing. The country is torn apart by factions, predominantly the Nationalists and the communists. Holman finds his ship and discovers a few important points.

The first and most important issue of the San Pablo is that the men onboard do little but military training and slacking off; the ship is actually run by a gang of coolies who do all the work. This is an issue for Holman, whose job it is to take care of the engines, something he likes doing. He makes a friend in Frenchy (Richard Attenborough) and runs afoul of the ship’s captain, Captain Collins (Richard Crenna) and his assistant, Ensign Bordelles (Charles Robinson). He also discovers the ship’s main thug in Stawski (Simon Oakland).

When an accident kills the main engine room coolie, Holman is forced to choose a replacement rather than running the engines himself. He selects Po-han (Mako) and discovers that the man catches on quickly and the two become friends. An incident with Stawski puts Po-han’s job at risk, so Holman arranges for the coolie to fight Stawski. This is important for several reasons. Winning will keep Po-han on the ship. Second, it affects Maily (Emmanuelle Arsan). Maily has been sold into something like a cross between indentured servitude and prostitution. She’s also someone of interest to Frenchy, who falls for her immediately and to Stawski, who wants to drum up her $200 price from her owner/pimp (James Hong).

There’s also a romance between Holman and a missionary/school teacher Shirley Eckert (Candice Bergen). And there’s a growing resentment of the American presence in China, particularly from the Nationalists, who are looking for any excuse and any scapegoat to unite the people of China under their banner. When problems arise with Frenchy and Maily, and Holman it becomes something close to an international incident. And when the missionaries become threatened by the increasing trouble inland, everything comes to a head and a near-mutiny.

It’s an interesting film, if too long for the story it wants to tell. It is, perhaps, too much story for the film. There’s too much going on at all times, although it isn’t terribly difficult to follow. It simply has a great deal of threads running through it that eventually need some sort of resolution. With all of the various threads, the movie stretches to nearly three hours long, which is about half an hour too long.

Steve McQueen earned his only Oscar nomination for this film, as did Mako. I’m mildly surprised that this was McQueen’s only nomination—he certainly could have received one for several other films, but he earned one for this one, too. It’s a classic role for him. Holman has all the classic McQueen character traits. He’s able to handle himself, often butts heads with authority, does things his own way, and is perfectly decent at heart.

The biggest objection to the film, at least in my opinion, isn’t the length, but the fact that it doesn’t really feel like it belongs to the time it claims. This has the look and feel of a World War II film, and I had to keep reminding myself that it takes place in 1926. In many respects, this is a small quibble; the film doesn’t really play any differently in 1926 than it would in, say, 1942, save that the enemies would be different.

Where the film really works is its general callousness. This is definitely by design. Nearly every moment of the film is tinged by cruelty from one person to another. The sailors are cruel to the coolies and crueler to the Chinese women in the bar where they congregate. The Chinese Nationalists are cruel to anyone they can find. There’s a sense of the lives of everyone involved being worthless. This works perfectly, and it’s absolutely the intent. While we are given every opportunity to learn the real value of these people, we also learn that the powers-that-be hold them with not even contempt, but with no importance whatsoever.

While most of the action here is stand-offs, there are some great action sequences toward the end that are worth the price of admission, too, especially because Richard Crenna gets to get all badass. All in all, this is a film surprisingly worth your time and attention, even if you’ve never heard of it.

Why to watch The Sand Pebbles: It’s an unusual war story for its time or any time.
Why not to watch: It’s too long.