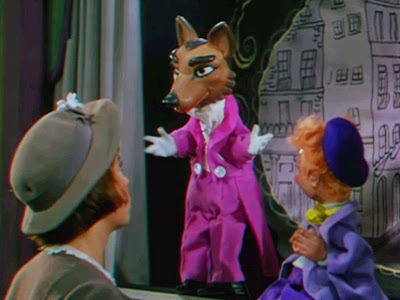 I don’t have a problem with cute. It’s just that I’m not under the impression that naivety equates with cute. That’s the central conceit of Lili. At some point, at least in my opinion, naivety plays like stupidity, and I can’t find that interesting at all. I admit there’s a fine line to walk here. If the goal was simply innocence, the filmmakers went far beyond that with our title character. I’m certain the world is full of people who look at the wide-eyed, lost lamb appearance of Leslie Caron and have their hearts melt. I’m not one of those people.

On top of this problem is the fact that a massive amount of this film deals with puppets. I don’t like puppets. I’m not scared of them or unnerved by them and I don’t actively hate them; I just don’t particularly like them. These puppets play into the singular naivety of our title character, too, because she talks to them and sings with them. It’s like Rain Man goes to the carnival. I want to be clear on this—it’s a childlike quality that is fine in children and obnoxious in anyone of a double-digit age. It’s not specifically stupidity or lack of education, but an apparent inability to consider others as separate entities. In the world of our character Lili (played by Leslie Caron), everyone is interested in what she is because she is interested in it. Everyone knows what she knows because she knows it. It’s like she missed that stage in development where we learn that other people have different perspectives and experiences that we do. Again, I find it difficult (to put it mildly) to find that endearing.

Lili (Leslie Caron) is a young French orphan who arrives in a new town looking for the friend of her father, who has recently died. Her hope is that her father’s friend will employ her in his bakery, but she discovers that the friend has also recently died and the bakery is shuttered. A tailor offers her a job, but it’s soon evident that he’s more interested in the fact that she’s young and attractive than in her ability as a salesgirl. She is rescued from this fate by Marc (Jean-Pierre Aumont), a carnival magician who happens to be in town. Marc has never seen an attractive woman he wasn’t interested in, but Lili is too young for him. He takes pity on her, though, and arranges for her to have a job in the carnival.

And now we get a weird little love triangle. Lili becomes infatuated with the magician, and in fact loses her waitressing job because she can’t help but watch him perform. At the same time, the angry and bitter carnival puppeteer Paul (Mel Ferrer) becomes infatuated with Lili despite the fact that she is only 16. However, he is bitter because he was once a dancer, but was injured in the war and is now forced to be a puppeteer. He is angry in person but discovers that he can interact with Lili through his puppets. And thus he hires her to work with his show where she will basically be Fran to his Kukla and Ollie (sorry for those of too young for the reference).

There’s a little bit of weird darkness here. Lili’s job with Paul and his partner Jacquot (Kurt Kasznar) happens because she is threatening to kill herself after losing her job. And it turns out that Marc, who she remains infatuated with for much of the film, is married to his assistant Rosalie (Zsa Zsa Gabor).

There’s an ugly truth hiding underneath all of this: Lili’s naivety. The first time she interacts with the puppets, it’s almost as if she’s not aware that there’s a guy behind the curtain controlling their actions. It’s not unlike being introduced to someone in high school who still firmly believes in Santa Claus. She’s evidently unable to tell the difference between reality and the fantasy of the puppets. Later, when she knows that Paul and Jacquot are working the puppets, she still interacts with them as if they are separate entities.

And so I’m going to pull out a word that fellow blogger Chip Lary hates because of how it is misused. Here, I think it’s appropriate. “Pedophilia” is not typically associated with 16-year-olds as the target, but Lili is a mental child and an emotional one, so I stand by its use here. Finding Lili attractive once she opens her mouth is like being attracted to someone desperately caught up in the adventures of Dora the Explorer.

I don’t find that sort of innocence attractive. I find it unfortunate. And eventually, when Lili tries to grow up, she ends up dancing with life-sized versions of the puppets. And that’s just creepy and weird because it’s a continuation of Lili’s stunted emotional and mental development.

IMDB calls this a musical, and it really isn’t much of one. There are a couple of dance numbers (including the creepy giant puppets) and one song that’s performed a couple of times and that’s really it.

The two brightest spots here are the fact that Lili is quite short, running just over 80 minutes, and that Mel Ferrer is quite entertaining. I’ve decided that while I’m ambivalent to the charms of Leslie Caron, I’m looking forward to the next time I come across Mel Ferrer.

Why to watch Lili: It’s short.
Why not to watch: Puppets. Goddam puppets.