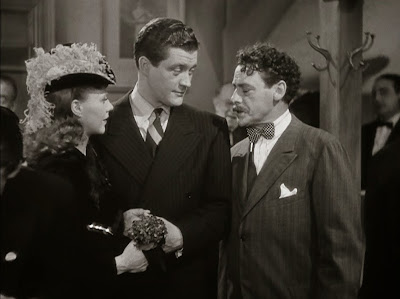 There’s a weird sense of the archaic with Kitty Foyle. The first five minutes give us a “history” of women in the white collar workforce. The implication offered is unflattering to say the least. According to the opening, before women got themselves all that equality like the right to vote, men would happily give up their seats in a trolley car for a woman. Afterwards, well, let ‘em stand. These scenes are interspersed with text that appears as if it has been carefully cross-stitched. It would be offensive if it weren’t so goofy.

Anyway, we soon meet our heroine, the eponymous Kitty Foyle (Ginger Rogers), a white collar worker in an office of same. Released from the workday at 5:30, the women head off into the night looking for dates, because remember, this is 1940. What women want is not a job but a man, and Kitty is no different. The man in question for her is Mark (James Craig), a doctor who postpones their dinner to conduct an emergency baby delivery. While Kitty holds the newborn babe and Mark cleans himself up, he asks her to marry him and she says yes.

Kitty rushes home to get her things together only to discover a man named Wyn Strafford (Dennis Morgan) already waiting for her in her room. Now, we don’t know who this guy is right now, but Kitty certainly does. Wyn tells her that he’s running off to Buenos Aires that night at midnight and he wants Kitty to come with him. She knows that he is married and he admits that he may not be able to get a divorce, but he’s leaving and he wants her with him. She’s not only tempted, she’s ready to dump Mark in a heartbeat. That’s when she starts having a conversation with herself in the mirror, and the mirror starts answering back. And before anyone can say, “Doodly-doodly-doop,” we’re off into a flashback that will carry us for the rest of the film.

What we learn is that Kitty is a working class girl living in Philadelphia with her father. Kitty is fascinated with the rich folk. But then comes the Depression and Kitty is forced into school to learn shorthand and typing. Soon after she has a meet-cute with Wyn, who hires her as a secretary. The two soon fall for each other but Kitty is smart enough to realize that their difference in social standing is going to eventually be a problem.

With the failure of Wyn’s magazine enterprise, the two drift apart and Kitty winds up in New York where she meets Mark. Eventually, Wyn comes looking for her (no, we’re not back to the beginning yet) and the two get married. All those misgivings she had earlier? Here’s where they pay off. As a girl from the wrong side of the tracks, Kitty is not well-received in the Strafford family. She also learns that no matter what game Wyn talks, that if he doesn’t follow in the family business of banking, he’ll be disinherited, and there’s no way he’d be able to survive as a poor man. This leads to their separation and divorce, which happens just before Kitty discovers that she is pregnant. And shortly after that, she learns of Wyn’s engagement to a Philadelphia socialite more acceptable to the Strafford family.

And that brings us back to the beginning of the film and suddenly all of her strange behavior regarding Mark and Wyn makes sense to us. I won’t spill the beans on which way she chooses.

In many ways, Kitty Foyle is daring for its time. The divorce was daring enough for the time, but the baby after the divorce? It’s just within the bounds of decency. We know that Kitty was married when the baby was conceived, after all, even if she wasn’t for the actual delivery. In this respect, though, Kitty Foyle is a victim of its age. What was so daring for my grandparents’ generation, perhaps even scandalous, is taken as merely a matter of course today. The real scandal for the era, honestly, is that Kitty plans on accompanying Wyn to Buenos Aires essentially as his mistress.

Ginger Rogers is the main reason to watch this. My guess is that this earned the Best Picture and Director nominations because it does go into dangerous territory and does so well enough to be daring without becoming repellent for the time. But Ginger Rogers is really good here. She’s plucky and sweet and it’s easy to like her and care about her issues.

Kitty Foyle is a fine film. I doubt I’ll feel a desperate need to watch it again anytime soon. It’s melodramatic and a bit manipulative and it goes for the ending that the times demanded, but it’s certainly easy to watch. And it doesn’t hurt that Dennis Morgan has a little bit of a young Joseph Cotten in him.

Why to watch Kitty Foyle: Ginger Rogers, really.
Why not to watch: It’s very much a product of its time.