So the goofy post titles are back. Final results were 13 in favor, 3 against, and 3 who didn’t care. 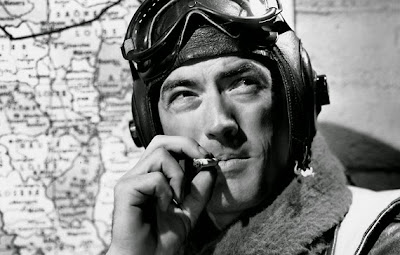 I appear to be on a war film kick lately. I’m not sure what appealed to me about Twelve O’Clock High today, but since it was streaming I figured I’d give it a go. This is much more of a standard war movie than yesterday’s film. As someone who grew up watching military films, it was not unlike slipping into an old pair of comfortable shoes. This is World War II all the way and air combat all the way. I felt right at home.

At least for the first couple of minutes, that is. We learn right away that while Twelve O’Clock High isn’t going to show us a lot of graphic violence, it’s not going to pull its punches with regard to the men flying bomber missions over Europe. We start with a short framing story. A man unknown to us discovers an old mug in an antique shop and buys it. He then travels out to an open field that used to be a World War II airbase. This takes us into the past and we see a group of bombers returning from a mission. Any illusions we may have had that this will be straight propaganda are blown out right away. The bomber group has been hit hard.

Specifically, there are terrible casualties in the group. In addition to the five planes lost, we find one man with a badly broken leg, another shot in the head with his brain visible, and one plane has a spare arm in it, the rest of that airman having been bailed out over France. We don’t really see any of this (this is a film from 1949, after all), but we get it in graphic detail.

We discover we are spending time with the 918th bomber group, newly in England and considered a hard-luck outfit due to losses. Hard luck or not, the group is tapped for its fourth daytime bombing raid in four days, which causes the group’s commander, Keith Davenport (Gary Merrill) to head to bomber command to complain. Here he encounters Brigadier General Frank Savage (Gregory Peck), who is concerned about the group and more concerned with Davenport. He takes his concerns to the commanding officer (Millard Mitchell). Between them, they diagnose the problem as being a case of Davenport becoming too close to his men, making him unable to properly maintain discipline. Davenport is sent to bomber command and General Savage is given command of the 918th.

What he finds is a train wreck of bad morale and worse discipline. He starts trying to to instill it immediately, running into conflict with all of his men, particularly Harvey Stovall (Dean Jagger, and the man from the beginning of the film). What Savage wants is a way to bring the men a few victories and get them some pride back, but it’s an uphill battle since the men want nothing to do with him. Slowly, over time, Savage’s methods begin to take effect, but Savage finds himself folling into the same trap that Davenport did: caring too much for the men under his command.

There’s a preconception, at least in my opinion, that war films of this era are often—almost always, in fact—propaganda films. This is the start of the Cold War, after all, and maintaining the public’s good opinion of the military was necessary. Twelve O’Clock High does fill that bill at times, but it does so without pulling its punches in terms of the human cost of war. Every war film has people die, and many of them feature the deaths of characters that become beloved. But here, the deaths are off-screen and almost callous. There’s a sense of realism here that’s difficult to put aside, and that’s impressive for a film of this vintage.

This is a film that was made with the cooperation of the American military, since it features a number of scenes of actual footage from bombing runs and dogfights from the war. These are shown as if they are part of the actual bombing raids, and it’s easy to forget that these are not faked footage. When we see a plane going down, it’s really someone dying. It’s an additional piece of realism that really works.

If there’s a fault here, it’s that despite the realism, the film is more predictable than it should be. It gives us the most believable ending it can in the context of its predictability, but predictable is still predictable.

What surprises me most on looking back is that there isn’t much in the way of actual combat in the film until the final half hour. I didn’t realize exactly how much had gone by until we finally get into a cockpit and the film is almost over. I didn’t notice because the film is solid enough and compelling enough up to this point without needing it.

This is a worthy watch. It’s enough in line with the typical war film of the era that it works as a fine example of the genre, but it’s smart enough to distinguish itself.

Why to watch Twelve O’Clock High: Surprisingly realistic in some ways for the year in which it was made.
Why not to watch: Despite the realism, it’s predictable.