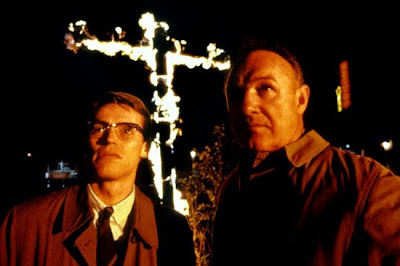 I go back and forth on the term “Oscar bait.” There are times when I see the phrase as something just as derogatory as “chick flick” and other times when it feels completely warranted. A film like Mississippi Burning is very much a film made with Oscar in mind. It would be difficult for it not to be. This is a film all about the Civil Rights movement, based loosely on a true story, and featuring a trio of murdered civil rights workers in the deep, deep South. With a halfway decent script and the right performances, the nominations will follow.

It helps to have a hell of a cast. Mississippi Burning features a cast of people who were stars (or at least known) when the film was made and a handful of others who have gone on to pretty nice careers. The cast is the sort of thing a filmmaker would sell his or her soul for: Gene Hackman, Willem Dafoe, Frances McDormand for starters. Toss in Brad Dourif, Michael Rooker, Tobin Bell, Stephen Tobolowski, R. Lee Ermey, and that-guys Kevin Dunn, and Pruitt Taylor Vince, and you have the sort of cast able to give those performances necessary to secure nominations.

IMDB calls this a mystery, but it’s difficult to understand that designation when we watch the murders happen in the opening minutes of the film and also get a solid look at the killer. When the civil rights organization for which the three now-dead men worked gets suspicious, an FBI team is sent down to the relevant flyspeck town in Mississippi to investigate. This investigation is headed by Alan Ward (Willem Dafoe) assisted by Rupert Anderson (Gene Hackman). We know from the opening minutes who is guilty here. The film isn’t about us learning what happened, but about the fight for equality in the South during the early- and mid—1940s.

Despite our knowledge, it all works pretty well. And since we don’t have to worry about who is responsible for what, we can pend most of our focus on how the obfuscation happens rather than on who might or might not be guilty. It’s a freeing up in many respects; since we know that local police officer Clinton Pell (Brad Dourif) is guilty, it allows us to focus more on the budding friendship/romance between Agent Anderson and Pell’s wife (Frances McDormand).

Mississippi Burning has some unique problems as well, There’s no real problem with the sotry or plot, but there’s also a sudden shift in the character themselves that maes things tough to believe too strongly. The biggest is the reaction and actions of Agent War through most of the film. Dafoe portrays Ward as a man interested in following the company line in all cases and in all places To see him suddenly break ranks with his ideals really doesn’t fit.

A bigger and deeper issue is what this breaking ranks means for us as the viewers of the film. It;s easy for us to get frustrated with the course of the investigation while we are watching. In fact that’s the entire purpose of the movie. Instead, what’s at issue is our own complicity in what happens. We’re supposed to be pleased when Ward finally agrees to use Anderson’s methods of coercing a confession.

The problem there is one of what it means. In our real lives, the protections we have from the unlawful use of power are some of the most important parts of the Bill of Rights that could possibly exist. Here, the minute the investigation gets solved, we’re all for chucking the rules and going for what is going to turn up the right clues to make the charges stick. Basically, we want the forces of law and justice to follow the rules until those rules prevent them from pushing their investigation forward. That’s incredibly dangerous, and yet we can’t wait for it to happen so that we can be righteously indignant when the film takes those lessons learned and gets what they’re looking for. To hell with proper procedure.

It’s not in question that this is a good film. It is. It’s beautifully acted and made, and the story is a compelling one. The problem is who easy it is for us to want the good guys to start fighting fire with fire. That’s a dangerous place to be, and it’s never a good idea to have us cheering for the loss of what is, at its core, some of our most cherished and hard-won basic rights.

Why to watch Mississippi Burning: Hell of a cast
Why not to watch: Hooray for the destruction of rule of law