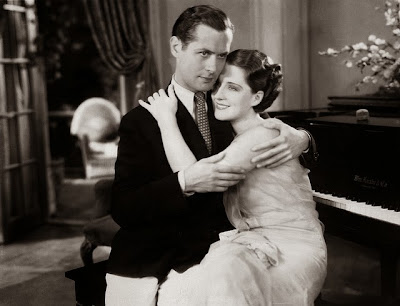 When one looks at the earliest films in Oscar’s arsenal, one is apt to find films in which the plot seems to simply be bizarre by modern standards. Their Own Desire is a case in point. This is a weird little film, and I stress the word “little” because the running time barely scrapes past an hour. In a way, it reminds me of a film like Dodsworth in that it is an ultimate white people problems film, or at least a rich people problems film. Seriously, the thing starts with a polo match, and the players in the game are our main characters. I’ve not only never played polo, I don’t know anyone who has.

Anyway, Lucia “Lally” Marlett (Norma Shearer) has the sort of life that most people in 1929, pre- or post-crash would have loved to have. She and her family play polo and have more money than they can spend. Tragically, sadness has crept into the Marlett home. Lally’s father Henry (Lewis Stone) has been carrying on a year-long affair with a woman known to us only as Mrs. Cheever (Helene Millard). Lally discovers this as her parents have decided on a divorce. After a heated argument with her father, Lally heads off to summer with her mother (Belle Bennett).

It is while summering at a resort on Lake Michigan that Lally encounters Jack (Robert Montgomery). Jack is brash, introducing himself to Lally by watching her dive into a swimming pool and then diving in after her fully clothed. Their romance is the very definition of whirlwind, and it’s not long before Lally has fallen for his charms completely. And then the bombshell drops. Jack’s last name is Cheever. Yes, it’s the same Cheever. So, after cutting herself off from her father, Lally has subsequently fallen for the other woman’s son.

So, while this is very much a rich white people problems film, it’s also got shades of Jerry Springer. I wonder if a film like The Graduate would exist without one like Their Own Desire to pave the way into ugly family reunion territory. I’d love to say that there’s more to this movie than this weird little coincidental relationship, but there isn’t. Lally discovers who Jack actually is and drops him, but she can’t give him up and eventually the two plan to run off and get married, much to the distress of her mother.

And this is where Their Own Desire takes a serious dip into problem territory. Sure it’s white people problems and sure it’s an episode of Jerry Springer, but once mom finds out about Jack Cheever, it takes a turn for the melodramatic in the most severe way possible. Belle Bennett pulls out all the stops, and speaks as if in the center of a Greek tragedy. It quickly becomes so overwrought and manipulative. I’m sure that there are women (and men) who act like this in real life, but I can’t take them seriously, either.

Norma Shearer, who was nominated for this, is the main reason that this is worth seeing. She’s surprisingly modern in appearance and looks like she could be plucked out and dropped into something released this year.

I typically like to write quite a bit more than I have, but I’m not honestly sure that Their Own Desire warrants much more of your time or my effort. It is, at its core, a standard soap opera melodrama of the early talkie period. It’s emotionally overwrought and because of that it’s difficult to take it very seriously. I don’t doubt that plenty of people took it seriously enough in 1929, but try as I might, I can’t get past its emotional blackmail. That it even makes reference to the balcony scene from Romeo and Juliet is just reprehensible. The ending, where Jack and Lally are off in a canoe while a storm rages takes the film into dark territory, but even this is just more manipulation and melodrama.

Ultimately, I can’t say a lot for it.

Why to watch Their Own Desire: It’s a piece of Norma Shearer’s career.
Why not to watch: Problems it’s difficult to care about.