Film: Lilies of the Field
Format: DVD from NetFlix on laptop. 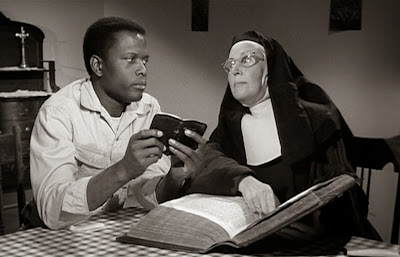 Apparently it’s nun week here at 1001plus. I’m not sure why this is, but I should probably track down The Nun’s Story while this particular iron is hot. I knew nothing about Lilies of the Field when it showed up from NetFlix, so imagine my surprise when I popped it into the spinner and it proved to be another film with a significant nun component. It also has a significant Sidney Poitier component, and that’s rarely a bad thing. Rather than being put out by the small convent, I decided to instead be happy that it wasn’t merely a Sidney Poitier film, but one for which he won an Oscar.

So let’s talk high concept for a moment here. At its heart, Lilies of the Field is a simple story. An itinerant handyman named Homer Smith (Sidney Poitier) finds himself on the property of a small group of nuns. He offers to fix a fence he sees four of the sisters struggling with but is instead sent to fix the roof. Expecting to be paid, he’s instead given a meager dinner at the behest of Mother Maria (Lilia Skala). The next day, it’s more of the same. Homer eventually figures out that Maria wants him to build them a chapel. She also wants him to do virtually everything else for the nuns, including providing English lessons.

One Sunday, after driving the nuns to mass, Homer slides off into a nearby dive for a real breakfast, since he and the nuns have been surviving on subsistence rations. From the proprietor Juan (Stanley Adams) he learns that the nuns fled East Germany over the Berlin Wall because of this bequest of land and are now literally scratching out an existence as best they can. When Maria manages to get a small donation of lumber and bricks from a local contractor, Homer swings himself a job two days a week. Mostly, he does this because he wants to show up the owner of contracting business (director Ralph Nelson in an uncredited role), who is dubious of his abilities as a black man. In doing this, Homer essentially locks himself in as their contractor and agrees to build the chapel on his own.

Things, of course, work out through various means, although the road isn’t smooth. One of the biggest problems is that Mother Maria is incapable of expressing gratitude. When Homer uses his weekly paychecks to buy groceries for himself and the nuns, she thanks only God and refuses to thank him. Eventually, when the initial bricks run out, Homer drives off, leaving the project unfinished. He eventually returns, and suddenly donations of bricks and materials appear. And slowly the chapel builds.

As much as this might be about the building of the chapel, it is far more about the clash of personalities between Homer and Mother Maria. Both of them are strong and uncompromising people. As a black man in the American Southwest in the 1960s, Homer wants to make a living, of course, but also to be respected for the work he does and for his capabilities. While this is a difficult proposition in general, he finds that Maria is the toughest sell. At the same time, Homer isn’t a perfect character. He refuses help from the many Mexican workers in the area, wanting instead to be responsible for the chapel himself. In fact, it’s only through the insistence of Juan that he accepts any help at all.

While Mother Maria is in many ways his opposite, she is actually just the opposite side of the coin from Homer. They are extremely similar in their hardheadedness, but are unable to see it because they are too close to each other throughout the process.

In truth, while the other four nuns are cute and fun, this film is really all about the interplay between the two main characters and their own individual growth. We see Homer turn into something more like the man he wants to be, doing something for more than simply monetary gain and learning to do things for their own reward. At the same time, Mother Maria learns that while her faith may give her strength, it’s the people around her who genuinely deserve the lion’s share of the credit for the good things that happen. There’s a wonderful moment near the end where she does realize this, and we see this happen almost completely by her facial expression. It’s the same moment we see that Homer has gained a great deal from the experience as well.

I think I’d be hard-pressed to say I loved this, but it’s not a strain at all to say I liked it and enjoyed my time with it. It’s not one I need to see again, but I’m happy to have seen it. It helps a lot that it seems like Sidney Poitier was having a great time in this role.

Why to watch Lilies of the Field: It’s difficult not to like Sidney Poitier or to respect Lilia Skala.
Why not to watch: So, evidently nuns get to take advantage of the goodness of others.