Oscar picked its sort of movies for the five nominees this year, although my tastes tend to be quite different. There are a number of films that could have been nominated and others that, in retrospect, probably should have been if influence is any indicator. Primary in those left off is Das Boot, which is still one of the greatest war films ever made. Man of Iron is certainly worth a mention here as well. I’m a big fan of Michael Mann’s Thief even if others find that love misguided. I think Body Heat is underappreciated, too. In the “would never be nominated category” are An American Werewolf in London, Evil Dead, and The Road Warrior, all of which cast a shadow that reaches to today. 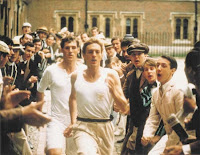 5: We’re punting the eventual winner Chariots of Fire right away. I understand completely why the Academy decided that this was the best film of the year and I’m also of the opinion that they couldn’t have gotten this selection more wrong. Chariots of Fire is just…dull. Some folks like it, I guess, because I’ve been told by people that they like it. For me, I can’t remember much about it except for the Vangelis soundtrack and the image of slow-motion white guys running on a beach. A pretty image and a great (for its time) soundtrack do not a Best Picture make, and this is no Best Picture.

4: Reds is following right behind Chariots of Fire. Again, this is not specifically a bad movie, but it is a long one and not a particularly interesting one in my opinion. It feels like an oddity, turning a communist rabble-rouser into a Hollywood hero, particularly in the early days of Ronald Reagan. The biggest issue is that it’s overlong for the story it tells. A three-hour film on the Bolshevik Revolution would be warranted, but Reds uses that event as a backdrop for a love story. It’s good, but it falls short of great, and thus falls far short of Best Picture.

3: The most difficult decision I had here was what to put third and what to put second. I’ve opted for On Golden Pond third only because it’s such a small story. It’s a very good story and it’s beautifully told. It gains a ton of points for making Henry Fonda play a cantankerous old bastard who has a ton of great lines beautifully delivered. This is a sweet story and worth seeing, but it’s also the sort of film that doesn’t specifically warrant rewatching in my opinion. I like the relationships and I like where the film goes, but a story of reconciliation is hardly the sort of thing that gets me out of bed in the morning, because that story isn’t that compelling and one of the two characters reconciling isn’t in the film that much. It’s a bit of a cobble. Sweet, but not special enough.

2: I’m mildly surprised that Atlantic City made it all the way up to number 2 for me. I don’t dislike this film at all, but I also can’t claim to love it. There’s a marvelous sense of loss and of urgency against time here, which I appreciate very much. This is almost a neo-noir but doesn’t quite get all the way there. The biggest connection, at least for me, is that all of the characters are, essentially, losers destined to keep on losing. Where I lose the trail with Atlantic City is the bizarre May-December romance. Burt Lancaster is old enough to be Susan Sarandon’s grandfather, so a romantic relationship between them is just sort of icky.

1: Honestly, is there a real choice that isn’t Raiders of the Lost Ark? Sure, I’ve got the benefit of hindsight, but Raiders is a cultural icon even if not all of the sequels are completely up to snuff. This is a film that has everything that a great day at the movies needs. There’s fantastic action, a romance, explosions, a fun plot, and even the bona fide wrath of God at the end to tie everything together. It’s also got wonderful performances top to bottom and any number of memorable scenes, including one of the greatest chase sequences ever filmed (and that’s saying something in a year that saw the release of The Road Warrior). Hell, my wallpaper is the closing shot from Raiders. Did you honestly think I could pick something different?

Email ThisBlogThis!Share to TwitterShare to FacebookShare to Pinterest
Labels: 1981, Atlantic City, Best Picture, Chariots of Fire, On Golden Pond, Oscar Got It Wrong, Raiders of the Lost Ark, Reds