Format: DVD from Netflix on laptop. 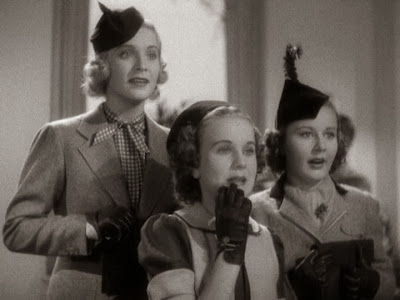 I’ve had a couple of objections to films recently, so it’s mildly refreshing when I find one like Three Smart Girls that more or less demonstrates the other side of those rants. I complained, for instance, about people playing roles much younger than the actor’s actual age. In this film, Deanna Durbin plays a 14-year-old, but she was 14 or 15 when the film was shot. That works. I’ve complained about melodrama. Three Smart Girls has a large dose of melodrama in it, but it’s also a comedy, so it plays that for laughs. I find this still a difficult film to love, but it does enough right that it’s able to at least go down easily.

The biggest issue is that, once again from a film in the height of the Depression, it’s a rich white people problems film. Actually, it’s a precursor to The Parent Trap in a lot of ways. Three girls, Joan (Nan Grey), Kay (Barbara Read) and Penny (Deanna Durbin in her major debut), discover that their estranged father is about to be remarried. Their father has been estranged from the family for 10 years, meaning that none of the girls really know him that well and Penny barely remembers him. Nevertheless, since “Mummy” (Nella Walker) has carried a torch for 10 years, they determine to break up the impending nuptials and get their parents back together. Did I mention that the three girls live on their father’s money in Switzerland? Or that said father, Judson Craig (Charles Winninger) is a multi-millionaire banker?

Well, that’s the basic rundown, but since this is a screwball comedy, we can expect a number of wrenches thrown heartily into the works. The first is that the woman in question, Donna “Precious” Lyons (Binnie Barnes), is a gold digger. The girls suspect this immediately, of course, but we’re quickly given confirmation. Second is that one of Judson Craig’s assistant Bill (John King) is obviously and immediately smitten with Joan, and the feeling is evidently mutual. Bill wants nothing more than to get Precious’s claws out of his boss. His scheme is to hire Hungarian Count Arisztid (Mischa Auer), a drunk, broke, good-for-nothing, to woo Miss Lyons away by claiming fabulous wealth and social connections.

This naturally goes wrong and the girls mistake Lord Michael Stuart (a very young and slender Ray Milland) for the Count. He plays along because he is suddenly enamored of Kay. He louses things up pretty well playing along as best he can. Well, mostly. Some of what he louses up he does intentionally so that he can be around Kay more. Kay, against her wishes since she believes he is a drunk womanizer, begins to develop a tender spot for him. Fortunately, we don’t get a love interest for young Penny, meaning that we don’t need to deal at all with outright ephebophilia (that one’s just for you, Chip).

And, well, wacky hijinks ensue. The other thing that ensues is we get some musical numbers belted out by Deanna Durbin. I say that a bit glibly, I admit and far too dismissively because Durbin really was a talent. I don’t for a second disagree that Deanna Durbin didn’t have a tremendous talent. But when she ends a number in particular, she sings a couple of notes beneath dog whistle range. Yes, she’s in tune and on pitch, but dammit, it hurts.

Truly the best thing about Deanna Durbin’s films, at least the few that I’ve seen, are that they are not traditional musicals. The moments where she sings are certainly cobbled into the narrative, but she’s not suddenly breaking into song about her feelings. The other good thing from my perspective is that we only get a few songs per film.

Three Smart Girls was, more or less, the coming out party for Deanna Durbin as a star, and it catapulted her into a short career during which she was the most highly paid female star in the world. A big chunk of that was no doubt her voice. But credit also needs to be given to the fact that she was easy to like on screen. Oh, sure, she generally played a Shirley Temple style character, and in fact ultimately gave up the movies because she was tired of being the girl who fixed adult’s problems and broke into song at the drop of a hat. But there’s no getting around the fact that a big part of the film’s charm is her presence.

Not a lot happens here that is too shocking and everything comes out right in the end, just as we expect. It’s got some fun performances throughout simply because it’s silly all the way through. I could honestly live without the first two songs (the third is magnificent, really). This is another one I’ll likely never watch again, but I was entertained by it the whole time, and sometimes that’s enough.

Why to watch Three Smart Girls: It’s kind of charming in spite of itself.
Why not to watch: Despite its charm it will still make you want to stab yourself in the earhole.