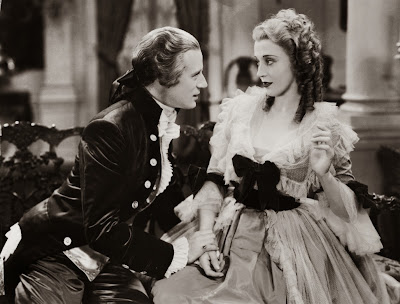 I’ve been recording rare movies off Turner Classic movies for a number of months. Unfortunately, my schedule doesn’t allow me to watch those movies that often, which means my DVR is getting full. Since I did hace the opportunity tonight, I figured why not get one of those recorded rarities out of the way? Almost at random I selected Berkeley Square. I’m pleased with it in only the most perverse way Watching it now means I can delete it from the DVR and I never have to worry about it again.

We start in the year following the American Revolutionary War. Young Peter Standish (Leslie Howard) has traveled to England on a slow boat to encounter and then marry his cousin Kate Pettigrew (Valerie Taylor). The Pettigrews need the marriage because they’re socially rich and cash poor and Standish has a great deal of cash. Everything seems to be fine until the moment that Peter is to enter the Pettigrew home, and he seems to vanish for a bit.

Flash forward to the present time of the film where we meet the modern-day Peter Standish (still Leslie Howard). He has just inherited the same house in London once lived in by his earlier relative of the same name. While there, he encounters a number of the old items from the past including his ancestor’s diary. He becomes enraptured with this vision of the past and also becomes moody and introspective. At one point, he realizes that he is in London on the exact anniversary of his ancestor’s arrival from Boston. He becomes convinced that those people of the past are somehow still there, existing in the past, like moving backwards on a river. He further becomes convinced that if he returns to his new home and enters exactly at the moment his ancestor did, he’ll be transported back to those times to live with and meet the people of the past.

And so, with no better justification than the fact that he thinks it’s going to happen, that’s what happens. He goes home and is transported back to the 18th century, even getting a wardrobe change. In the vernacular of the time, he and his ancestor basically swapped souls. Conveniently, they look identical since they’re both Leslie Howard. The bulk of the rest of the film is the modern Peter Standish in the post-American Revolution world. He knows the history that’s supposed to happen—“his” marriage to Cousin Kate, for instance. Unfortunately, a few things happen that threaten the future.

The first of these is that Peter Standish is unable to figure out the difference between existing in the past and treating it like some sort of Williamsburg experience. He talks to the people there as if they are all historical figures (because for him they are) and frequently slips into talking about the future. He does this so much, in fact, that it becomes farce at times. He catches himself about to talk of modern miracles so often that it becomes a comedy routine. All of this makes him appear like some sort of wizard or (more specifically for the people of the time) someone who is demonically possessed. This causes Kate to not love him, but fear him. Seriously, even a dog figures things out eventually, but Peter Standish can’t stop himself from talking about his own world to a group of people who treat him like he needs to be burned at the stake every time he does this.

Peter’s second problem with mucking with the time stream is that he’s not interested in Kate anyway. He’d much rather make time with Kate’s younger sister Helen (Heather Angel). Despite his own obvious weirdness, Helen finds herself attracted to Peter and the two quickly fall for each other. This, naturally screws up the future in a lot of ways, mostly in that the whole diary that Peter has used no longer accurate reflects the past. Peter can’t control his own ability to predict the future, though, which weird everyone out (except Helen). Eventually, he decides that the only way to protect the future is to return back to his own time, which means giving up Helen to the past since she can’t come with him. There is a lovely moment where he completely wigs out on everyone and starts ranting about the future, but that moment isn’t worth the rest of the film.

And so, yeah. That’s the story we’re given. A guy goes into the past because he really, really wants to. Once he’s there, he’s completely unable to not talk about things like cars, modern warfare, airplanes, and other current-for-him inventions. And then, when he decides it’s time to go home, he does so by essentially the same method he used to travel back to the past: wishing really hard.

The story itself borders on the ludicrously silly, which means that if this film is going to work, it needs to do so in the characters and the performances. The main performance here is that of Leslie Howard. It’s a decent performance, although not one that I’m excited about. Peter Standish is a twit, and while Howard’s performance of this guy as a twit is good, it’s also not that exceptional. Everything else here is mawkish and stupid. This is another film in a series of such where I couldn’t wait for the end to show up and release me from watching it. It is, ultimately, the most boring movie involving the concept of time travel I have ever encountered. It seems more or less like an excuse to have a weird romance and to have people dress up in waistcoats and corsets.

Worse, since that weird romance seems to be the entire point of the film, what we’re given is one of the most tepid, chemistry-free romances I’ve ever encountered. I’d be willing to buy into the inherent goofiness of the film if there were any good reason to do so. The reason we’re given—the romance between Peter and Helen—is so dull that it doesn’t justify a single bite of popcorn. Frankly, I could barely be arsed to come up with a title for this review.

Unless you’re a completest or have a desperate love of 1933 or Leslie Howard, don’t waste your time with this.

Why to watch Berkeley Square: Weird premise, especially for the time.
Why not to watch: It’s the most boring time travel movie ever made.