Better than the Shroud of Turin 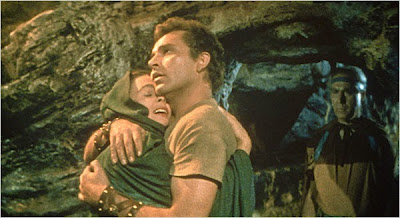 I suppose I shouldn’t be surprised at the number of Biblical epics that appear on the Oscars lists. There was a time when anything set in that era could almost guarantee a nomination or two, it seems. In that respect, The Robe’s presence shouldn’t be too shocking. There are even a few Biblical epics I like unabashedly. I enjoy Ben-Hur, for instance, and The Ten Commandments is surprisingly entertaining, even for a heathen like me. It seems like there’s one every other year in the 1950s.

The Robe, though, is completely overwrought as a film. I put it on a par with a film like Quo Vadis, a few good performances, but a very odd depiction of Christianity. A film like The Robe seems to have been made in no small part as a way to play in to the idea of Christian persecution. While plenty of Christians don’t live a life of paranoia, there is a set of them who like to think of themselves as under the threat of constant oppression.

The histrionic nature of the film comes in no small part from the scenery-chewing performance of Richard Burton (who was nominated for Best Actor) as Marcellus Gallio, a Roman tribune and son of a senator. Early in the film, he meets Diana (Jean Simmons), a childhood friend, and the two pretty much immediately decide they are in love with each other despite her being promised to Caligula (Jay Robinson), ward of the emperor and future emperor himself.

Caligula and Marcellus get into a bidding war over a Greek slave named Demetrius (Victor Mature). Marcellus wins and essentially frees the man, who decides to serve anyway in thanks, since he was about to be made a gladiator. In his anger, Caligula sends Marcellus off to Jerusalem. He arrives on the original Palm Sunday, which means he’s also there for the capture and trial of Christ. Because of his position, he is ordered to oversee the crucifixion himself, and in a game of dice, wins Christ’s robe, the robe of the title. When it starts raining, Marcellus throws the robe over himself, and is immediately wracked with guilt. Demetrius takes the robe and runs off, claiming to be a slave no more.

Marcellus’s madness caused by the robe sends him off to Canaan to find the robe and burn it to remove what he thinks is an enchantment. Instead, once the robe touches him, his madness leaves him and he’s immediately converted and starts going around with Demetrius and Simon Peter (the great Michael Rennie) to spread the new gospel. Eventually, they return to Rome where Caligula is now the emperor. There’s lots of fighting, rescuing, reuniting with Diana, and proselytizing until eventually the film comes to an end with martyrdom all around.

Naturally, I find a great deal of this film ridiculous, not the least of which is the theology. It’s not only simplistic, it very much tracks with the 1950s version of what people felt of as Christianity rather than what the religion’s holy text proclaims. I suppose I shouldn’t be shocked by that; other Biblical epics do the same thing, but none so much as this one, except perhaps for Quo Vadis.

The biggest complaint I have here is, without question, the melodrama that is injected into every scene, particularly those scenes (most of them) featuring Richard Burton, who decided not so much to act as to simply emote. There’s nothing that happens on screen that doesn’t seem to deserve a forearm thrown up against his forehead or a spin away from the person he is talking to so he can hide his face in the wall. Jay Robinson’s Caligula is similarly filled with chewing of the scenery, but his performance I enjoy. The reason is simple—Jay Robinson is manic and entertaining while Burton is simply maudlin.

The Robe is probably better than I’m giving it credit for being, but there’s a part of me that has trouble taking it very seriously. IMDB lists it as a history, but it comes across to me as roughly historically accurate as Abraham Lincoln: Vampire Hunter.

It is a massive spectacle, but it’s not one that has aged well. The huge cast of extras is pretty awesome. It’s one of the great things about these Biblical epics is the cast of thousands that we know are actual people, since putting in crowds with CGI hadn’t been invented yet. But in a number of the scenes, the fact that this was shot on soundstages is incredibly obvious; it’s some of the weakest matte painting work I’ve seen in a long time.

Ultimately, this isn’t one I’ll feel the need to see again.

Why to watch The Robe: Biblical epics are often interesting.
Why not to watch: It’s terribly overwrought.