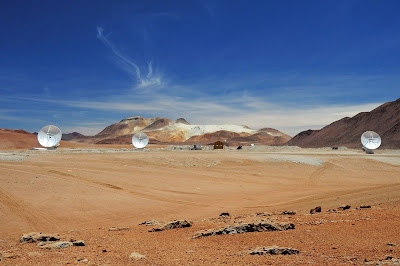 It wouldn’t be a stretch to suggest that of all of the films on the latest 1001 Movies list, Nostalgia de la Luz (Nostalgia for the Light) was the one I was most excited about seeing. I had never heard of this film before the 11th Edition was released, but as soon as I looked into it, I was interested. I’m a space geek, and a big chunk of this film is about astronomy and the telescopes in the Atacama Desert in Chile. I am convinced that no other science contains the potential for beauty like astronomy does. There’s a portion of this film that is also akin to archaeology, another interest of mine. Put two of my out-of-field academic interests in the same place, and you’ve got my attention.

But, of course, Nostalgia de la Luz is about so much more than just astronomy. Forty years ago, Chile was the site of one of the most brutal and terrible regime changes in modern history. Thousands of people were rounded up into concentration camps for political reasons and many of them were killed. It is the Atacama Desert that is key to both of these stories.

The Atacama is the driest non-polar region of the planet, with some areas receiving as little as 1-3ml of precipitation per year. Because there is virtually no cloud cover ever and no way for people to live there, it makes the desert a nearly perfect place for earthbound observatories. Additionally, the Atacama became a natural place for political prisoners of General Pinochet to be held, since escape would be that much more difficult with no water and no food (since nothing lives in this desert). The almost total lack of humidity has the unique property of mummifying the corpses of those who die here.

The film shifts between these two disparate stories, spending some time looking at the observatories and the fantastic photography that comes from them and some time with the survivors of the prison camps. There’s a connection here in the sense that one of the prisoners taught the others astronomy as a way to keep their minds active; they studied during the day and observed the stars at night. Eventually, the astronomy lessons were ended by the Pinochet government since the thinking was that knowledge of constellations could give them enough information to successfully escape.

In the second half of the film, part of the narrative shifts to women who search through the desert for the mummified remains of their loved ones killed some 40 years earlier during the coup. A great deal is made of the idea of searching through the past for answers. This is easy to see in terms of the women who search the desert, sifting sands to find any trace of the people who have been lost. However, in a very real sense, astronomers are exploring the past as well. The light they observe through their telescopes is thousands, sometimes millions or hundreds of millions of years old, the only remains from stars long dead.

For the viewer, Nostalgia de la Luz is an exercise in both the similarity of the two searches for the past and the contrast in what we are shown. Much of the film consists of the staggering images of distant galaxies and nebulae, pictures of indescribable beauty and color. These shots are contrasted with images of the bodies left in the desert, preserved in grotesque positions of pain and torture. This contrast between such beauty and such terrible images is a great deal of what makes the film work at all.

The problem here, and it is a real problem, is that Nostalgia de la Luz feels like a cobble. Director Patricio Guzman does his level best to unite these two stories as best he can, making as many connections as possible concerning these searches through the past, one academic and one political and far more desperate. But the connections, despite how carefully Guzman tries to make them, are tenuous at best. It feels very much as if Guzman wanted to make a film about the search for the missing people and bodies and also wanted to make a film about astronomy, but decided he could only make a single film, so he glued them together.

In other words, I wanted to like this a lot more than I ended up liking it. There’s a great deal of both passion and compassion evident here. Guzman treats all of his subjects with a great deal of respect and the women in particular with tremendous empathy, but it holds together far less well than I would like. It’s difficult to say that I’m disappointed in it, but I kind of am. It’s worth seeing for the spectacular photography and because the story of these desperate women needs to be told. But really, they need their own story, not a fragile connection to the story of the universe as a whole.

For what it’s worth, though, I could look at pictures of space and distant galaxies all day.

Why to watch Nostalgia de la Luz: Because astronomy is the most beautiful of the sciences.
Why not to watch: Because politics is the worst of humanity.