Film: The Music Man
Format: DVD from NetFlix on laptop. 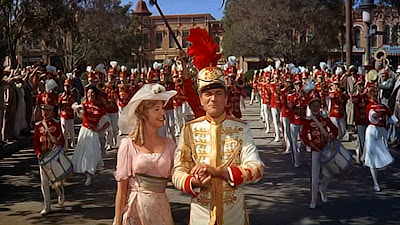 I tend to be a little twitchy when a musical shows up from NetFlix because it means I have to turn it around quickly to continue to get anything like value from the account. And I’m not really in the mood for a musical that often. It’s also a time thing—classic musicals are all about the bang for the buck for the audience, which means we’re always going quite a bit over the two hour mark. That’s absolutely the case with The Music Man, so I was leery and more so because it’s a period piece, set about 100 years ago. However, this is one of those musicals that comes complete with a bunch of really good and well-known songs, so I had some hope.

The Music Man is the musical story of a conman whose particular con involves “creating” brass bands of young men in towns across the Midwest. Professor Harold Hill (Robert Preston) has been the curse of traveling salesman across the state of Illinois. Thanks to his scams, even reputable salesmen can’t get the time of day before people are threatening tar and feathering. Having exhausted Illinois, Hill moves into Iowa and River City, just over the Mississippi, where he plans to run the exact same scam again.

The scam is that Hill foments trouble in his new town as a cause for creating a marching band of boys. The townspeople buy instruments, uniforms, instructional books and the lot, Hill makes off with their cash without teaching them a damn thing about their instruments. It’s an interesting con in that the people get the instruments and uniforms. It’s just that Hill makes a great deal of money on it, and they don’t really learn how to play anything.

Once in town, Hill runs into his old partner, Marcellus Washburn (Buddy Hackett), who is happy living in River City. Despite this, Marcellus helps him out initially by pointing out the most important people in town, including Mayor Shinn (Paul Ford), his wife Eulalie Mackechnie Shinn (Hermione Gingold), and the town’s piano teacher and librarian, Marian Paroo (Shirley Jones). Hill goes right to work with two goals. The first is to seduce the town librarian and to find a cause for concern among the townspeople.

The first takes some time to get started, since Marian is untrusting of men. The second happens when he discovers the local billiard hall (owned by the mayor) has a new pool table, which Hill claims is a cause of moral decline. With the town motivated, Hill starts selling instruments, mostly through things he makes up on the spot and flattery. He even sells a cornet to Marian’s mother (Pert Kelton) for young Winthrop Paroo (Ron Howard, yes that Ron Howard), who is plagued with depression because of his dead father and won’t talk because of his crippling lisp.

You know how this is all going to go without me telling you. Hill is a con man, but he’ll manage to get Marian to fall for him. But, since this is a musical, he’ll end up falling for her just as hard. The fact that he’s a con man will come out, but it will somehow work out in the end with everything going the right way for Hill, Marian, Winthrop, and pretty much everybody else. That’s expected. This isn’t going to end in bloodshed, after all.

There’s a lot to like there. First, the songs are generally really good, and even if you’ve never seen The Music Man, you almost certainly know songs like “76 Trombones,” “Marian the Librarian,” “The Wells Fargo Wagon,”and “’Til There Was You,” and for Family Guy fans, “Shipoopie.” Second, The Music Man absolutely doesn’t scrimp on the show. The dance numbers, and in fact many of the songs are lavish production numbers with dozens of coordinated dancers, and even some overhead shots so we can see mass choreography and twirling skirts. There are some truly epic song and dance numbers here that are absolutely a ton of fun to watch.

Another real bonus is Robert Preston, who did the role on stage. This is the film that made Preston a star in Hollywood, and with reason. The original plan was to get someone else for the role, but it’s virtually impossible to see another person doing it. Luminaries like Cary Grant balked on taking the part; Grant is alleged to have said that no one could really do it justice the way Preston could. Having seen the film, I’m inclined to agree.

I watched Elmer Gantry a week or so ago, and Shirley Jones featured prominently in that film as well. Well, in Elmer Gantry she demonstrated her acting chops; in The Music Man, she demonstrates that she can sing and dance and pull off a role like this just as well. Jones was dead sexy in 1960 and she hadn’t lost any of that in 1962. Marian is a very different character than she played in the earlier film, but Marian the Librarian is sexy in her own right (and if there's a librarian fetish out there, we can plant its origin here).

Oh, there are issues here, too. The Music Man is really fluffy and insubstantial in a lot of ways. Zaneeta Shinn (Susan Luckey) has the unfortunate habit of saying “Ye gods!” as punctuation for almost every line, and while funny the first time, it soon becomes annoying. It’s broad and overacted and filled with characters that have goofy comedy musical names (Marcellus’s girlfriend, for instance, is named Ethel Toffelmier). But again, that’s expected.

Really, though, it’s fun. Yes, everyone sings their feelings. Yes, everyone seems to spontaneously know the choreography. But it’s great choreography and great songs. Toss in The Buffalo Bills, a barbershop quartet, as the local school board, and there’s plenty of great music and great singing for the entire length of the film.

If all big classic musicals were like this one, I’d find myself a musicals fan pretty quickly.

Why to watch The Music Man : It’s a hell of a lot of fun.
Why not to watch: It’s also really silly.