Film: A Cry in the Dark
Format: DVD from Bourbonnais Public Library on rockin’ flatscreen. 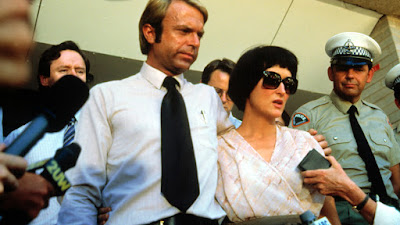 Give me a movie starring Meryl Streep and Sam Neill and you’d expect me to be excited about seeing it. So why was it so hard for me to get through A Cry in the Dark? Is it that it’s a courtroom drama? It can’t be that; I tend to like a lot of courtroom dramas. Is it the obvious religious connection? I’ve never shied away from films with far more overtly religious themes than this one. It can’t be that it takes place in Australia, because I’ve never had a problem with Australian films, either. For whatever reason, though, I got this movie through interlibrary loan almost six weeks ago and had to renew my checkout. I only watched it because I couldn’t renew it again and feel guilty not watching something I’ve ordered from another library.

A Cry in the Dark, also known as Evil Angels, is the story of the Chamberlain family who lost their young daughter Azaria during a camping trip in the Australian outback. While there are plenty of witnesses to what happens, public opinion almost immediately turns against the Chamberlains for a variety of reasons. Primary among those reasons is the Chamberlain’s religion. As Seventh-Day Adventists, they are significantly religiously “other” from mainstream Australia, and are thus assumed to be something of a cult and thus not above child sacrifice.

Rumors immediately circulate that the child’s name (Azaria) means “sacrifice in the wilderness,” which it does not. Additionally, evidence comes in that there were no bite marks on the child’s clothing when it is discovered, and no trace of saliva. Additionally, and fairly damning, is that the Azaria’s clothing is found folded neatly in the outback, something well beyond the capabilities of a dingo.

Initially, Lindy Chamberlain (Meryl Streep) and her husband Michael (Sam Neill) are exonerated despite public opinion having turned against the family. Shortly thereafter, new evidence comes to light that affects earlier testimony. This time, things don’t go as well for the Chamberlains. Part of this is Lindy’s demeanor on the stand. Rather than appearing emotional as everyone expects, she is instead stoic and impassive. Michael’s testimony doesn’t help, either; he has evidently lost his faith despite being a minister, and appears confused and second guessing himself.

So what’s this about? More or less, it’s about the pernicious influence in the media and our willingness to believe anything that’s handed to us. A Cry in the Dark attempts to stick as closely as possible to the actual narrative and the actual case. There are, of course, dozens of analogues in virtually any country with a legal system. The O.J. Simpson trial springs to mind as an obvious American example of essentially the same thing. Another obvious analogue is JonBenet Ramsey, whose parents were guilty in the eyes of the public regardless of their actual guilt or innocence.

One of the more interesting aspects of the film is the use of frequent shots of the Australian public reacting to various aspects of the case, virtually of these reactions being based on speculation, rumor, and innuendo. The Chamberlains essentially lose the case in the court of public opinion, which means that no matter the actual outcome of their trial, they have already lost.

As such, A Cry in the Dark is an extremely unpleasant film in a lot of respects. There is no redemption here for anyone, the Chamberlains or the Australian public, regardless of how things turn out. The actual case can be researched—I won’t go into it here. Suffice to say that that Fred Schepisi has presented the world not with a film, but with an indictment.

As a final note, I should probably talk about the main performances. Meryl Streep seems to collect nominations the way I collect DVDs, but I don’t think I can say that she didn’t deserve it. The woman is a damn chameleon, and she’s never encountered an accent, a speech pattern, or a role she couldn’t handle. Sam Neill deserves some credit here as well. His performance was ignored, but is critical to the functioning of the film. Neill plays a man overwhelmed by circumstance, but a good man nonetheless, and it ranks as some of his best work.

Why to watch A Cry in the Dark: Meryl Streep has never met an accent she can’t conquer.
Why not to watch: When you point one finger at the Chamberlains, you point three more back at yourself.