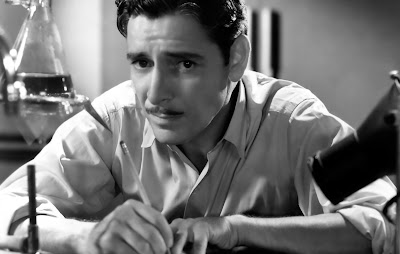 I tend to be ambivalent to medical dramas as a rule. I know virtually nothing about medicine, so there’s a part of me that always feels like I’m playing catch up with any drama that turns on medical knowledge. This is often less true of older medical dramas like Arrowsmith. Based on an earlier novel and dumbed down for a general audience, I didn’t have any real issues following the plot of Arrowsmith, which is a nod in the film’s favor.

We essentially fast-forward through the medical education of Dr. Martin Arrowsmith (Ronald Colman), learning only that he is smart and is more interested in research than in actual medical practice. We also get a meet-cute between him and nurse Leora (Helen Hayes) which soon blossoms into a romance. In fact, it blossoms into such a romance that it immediately alters the course of his life. Offered a research position by his mentor Dr. Gottlieb (a suitably wizened and foreign-y A.E. Anson), Martin declines. Instead, he marries Leora and the two move to South Dakota near her parents. Why South Dakota? Because in Leora’s old home town there is no doctor.

Martin practices medicine for a few years, but constantly doubts his own abilities, particularly when he loses patients to ailments like diphtheria. Frustrated by the life of a country doctor, he longs for a life of research. When a cattle disease strikes the area, he creates his own serum that rescues about half of the local herd. Why half? Because Martin Arrowsmith is a scientist, so only half of the cattle get his new serum. During this time, Leora miscarries their first child and is left unable to have children. Instead, she devotes herself full-time to the welfare of Martin.

His success with the cattle disease puts him back in contact with Dr. Gottlieb, who invites Martin and Leora to New York to work at a massive lab. Heading the lab is Dr. Tubbs (Claude King), who is more interested in promotion and accolades than he is in research. Martin spends a couple of frustrating years in research, coming up with nothing. However, an outbreak of bubonic plague in the West Indies puts Martin in contact with Dr. Gustav Sondelius (Richard Bennett). He recruits Martin to help find a cure, and off they go to the West Indies with Leora in tow.

In the West Indies, we get both the one thing that makes Arrowsmith really interesting and the one place where it seems to go off the rails. First, we encounter Dr. Oliver Marchand (Clarence Brooks). Marchand is interesting because he is black. This has to be one of the first if not the first instance of a black man depicted in an American film as someone who isn’t subservient, is capable, and who speaks proper English. Marchand is depicted as capable, competent, and as a good doctor. Kudos to Arrowsmith.

However, this is also where we get what seems like a weird subplot with the introduction of Mrs. Joyce Lanyon (Myrna Loy). Joyce is trapped in the West Indies during the plague outbreak and seems to be there as sort of a distraction for Martin, but that plot completely fails to develop. He’s essentially uninterested in her, even after Leora gets ill. Evidently, she’s a much bigger part of the story in the original novel.

The best story I’ve come across with Arrowsmith is that allegedly director John Ford was contractually obligated not to drink during the filming. Because of this, he left huge sections of the script unfilmed and ignored. This probably explains the absence of Leora from large parts of the film and the non-starter plot element of Joyce Lanyon. Rushing the filming was probably good for Ford’s mental well-being and bad for his liver, but it was definitely bad for the finished version of the film.

My takeaway from Arrowsmith is that it’s pretty dull. Characters pop up without much reason and vanish without much reason other than for moments of melodrama. The characters themselves aren’t very compelling, and while an outbreak of bubonic plague certainly should be the stuff of drama, the focus here is instead on Martin Arrowsmith’s dilemma of whether or not he should give a serum to everyone or callously let half of the population die off.

Why to watch Arrowsmith: There’s a little piece of history inside this film.
Why not to watch: Cliché-level high-mindedness and melodrama.

Posted by SJHoneywell at 7:35 PM