This is the seventh in a series of twelve films suggested by Chip Lary at Tips from Chip. 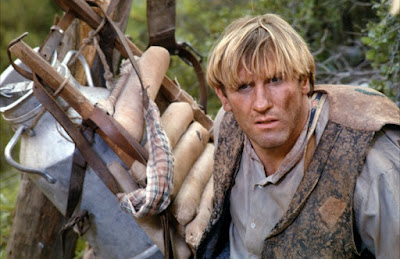 Okay, so technically, Chip gave me 13 films to watch, not 12. Jean de Florette and Manon des Sources (also known as Manon of the Spring) are technically two films, but they’re a single story. I understand completely why both films are necessary; the first film alone is incomplete and the second film doesn’t make sense without the first. So, while these are technically the seventh and eighth films that Chip selected for me, I’m going to consider them as a single film.

That makes sense in another way, too. There was a real issue for me in that there is no way to talk about Manon des Sources without including the end of Jean de Florette. Looking at this as a single story of three distinct acts rather than two stories of three acts each makes much more sense in the narrative as well. Additionally, the two films were released in the same year, and I imagine that they were frequently shown together in theaters. Jean de Florette even ends with the words “End of Part 1.” And so, I’m looking at these as two halves of a whole.

Jean de Florette is the longer of the two films by about 10 minutes. It also encompasses the first act of the story. Following World War I, Ugolin (Daniel Auteuil) arrives back in his small village in Provence where his uncle Cesar (Yves Montand) lives and farms. Ugolin has a new venture he wants to try: growing carnations. After Cesar sees the profit possibility, the two go to see another local farmer to buy his land. The man refuses, and is accidentally killed in the altercation that follows the attempt to buy the land. Cesar and Ugolin disguise the death as accidental and, in an effort to acquire the land eventually, plug up the spring on the farmer’s property. Without that spring, the land is virtually worthless. What they don’t know is that they are observed plugging the spring.

The land falls to the dead farmer’s sister Florette, but Florette dies the same day the letter arrives. Florette was also long ago the lover of Cesar, but she left the village and married a blacksmith when Cesar went to war. With her death, the land is inherited by Jean (Gerard Depardieu), Florette’s son. Jean arrives with his wife Aimee (Elisabeth Depardieu) and young daughter Manon (Ernestine Mazurowna, at least in this film). Aside from his mother being Florette, the most notable things about Jean are that he is afflicted with kyphosis (he’s a hunchback), he is educated and plans to farm with ideas learned from books, and that he was once a tax collector.

The bulk of Jean de Florette consists of Cesar and especially Ugolin befriending the new family on the surface but plotting against them behind the scenes. The lack of water on the land becomes a serious issue for Jean; because of where and how the land is situated, it rains on his property infrequently. With no spring, his crops begin to wither and die, and the rabbits he is raising start to suffer as well. Eventually, the family has no hope but to dig a well, an endeavor that eventually proves fatal to Jean. His death gives Cesar and Ugolin the chance to buy the land cheaply and unplug the spring, making it profitable and perfect for the growing of carnations.

Manon des Sources takes place about a decade following the first film. The biggest change in the area aside from the appearance of carnations on the hillside is that Manon has grown up (and is now played by Emmanuelle Beart). The town has acquired a new young teacher named Bernard (Hippolyte Girardot). Not much else has changed. Manon lives in a cottage on what used to be her father’s land and spends her day herding goats and trapping birds, which she sells in a nearby town.

The first half of this film, and the second act of the story, is Manon’s discovery of what happened on her father’s land as well as her locating the actual source of all of the springs in the area. Realizing that her father was cheated into his grave and that the other locals were complicit by not helping him, Manon blocks up the source of the spring, causing a drought on all of the farms in the area. Simultaneously, Ugolin catches sight of Manon and immediately falls in lover with her to the point that he sews a ribbon from her hair onto his chest. He doesn’t sew it into his hair—he literally passes the needle through his skin to sew the ribbon onto himself.

I’m not going to talk about the third act. It really needs to be experienced without a spoiler.

The biggest issue with the two films is one that will only affect some viewers. Combined, Jean de Florette and Manon des Sources run just under four hours, and for a specific mindset, it’s a slow four hours. After all, both films are, more or less, about water rights and access to spring water. This didn’t bother me a bit, but I can imagine that there are people who will be put off by this. They combine to be three hours of build followed by 40 minutes of revenge and 20 minutes of dénouement. I’m fine with that, but again, I can certainly see some people finding this tedious.

I didn’t, though. Both films have a lot going for them. Jean de Florette includes the work of three of the best and most acclaimed French actors in film history. Manon des Sources has two of the same actors and replaces Gerard Depardieu with Emmanuelle Beart. Admittedly, Beart doesn’t have the same track record or chops as Depardieu, but she’s damn easy on the eyes. Okay, scratch that; Emmanuelle Beart in 1986 is a damn vision. I don’t generally buy the “love at first sight” thing that happens in movies, but I completely accept Ugolin being smitten with her on a single viewing.

No less lovely is the countryside of Provence. Both films are lush and gorgeous, and I’d put up both films against any others that trade at least in part on the quality of the scenery. It’s not a shock to me that both films were instrumental in Provence becoming more of a tourist destination.

In short, I’m not going to rank one film above the other because looking at them as a single film makes the most sense (and means I don’t have to rank them). The story is a good one, and it’s smart enough to make Ugolin both a bastard and pitiable. It’s beautifully shot and acted. Both are unqualified wins. Good choice(s), Chip. You’re 6.5 of 7 for the year.

Why to watch Jean de Florette: Three of the greatest French actors in history in a single film.
Why not to watch: It’s only half of a story and it doesn’t end well.

Why to watch Manon des Sources: Because revenge is best served cold, and evidently dry.
Why not to watch: Ultimately, this is a film about water.

Posted by SJHoneywell at 2:51 PM