Film: Inside Out
Format: Sycamore Theater. 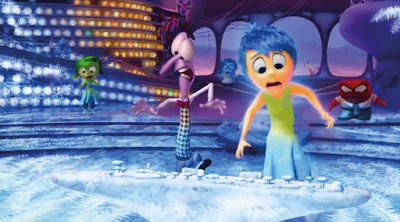 Being a frequent customer of one of our local mechanics has dividends. With six oil changes, you get two free movie tickets. With that in mind, I took Kid #2 to see Inside Out last night since Kid #1 is currently in Vermont for a couple more weeks. It’s hard to beat free movie tickets, and since the other choices at the small local theater were the fairly panned Minions and the thoroughly panned Terminator: Genysis, going to see the latest Pixar film was an easy choice.

Like pretty much everyone else on the planet, my expectations are up when I watch a Pixar movie. Inside Out is Pixar’s 15th feature-length film and the 13th one I’ve seen; of those 13, I genuinely like 10 and think the other three are at least worth watching. Inside Out falls into that first 10. The real question is where. Pixar at its best produces the best animated movies of anyone. Mid-tier Pixar is still generally a step above most other animation studios. What that means is that mid-tier Pixar tends to be better than other family-oriented animated films, but still feel like a disappointment because of those high expectations. Inside Out based on that, is somewhat disappointing. This is a clever and narratively complex movie, but there are parts that simply don’t work for me.

The narrative complexity comes from the way in which the story is told. The conceit of the movie is one that goes back to early days of cartoons (and possibly before that). In Inside Out, our brain is a giant storage facility/factory headed by a control room staffed by little anthropomorphic entities that actually make our decisions for us. The movie concerns Riley (Kaitlyn Dias). The emotions that run Riley are Joy (Amy Poehler), Sadness (Phyllis Smith), Fear (Bill Hader), Anger (Lewis Black), and Disgust (Mindy Kaling). As it happens (since we duck into everyone else’s head at times), everyone is controlled by these same five emotions, although each person has a different controlling emotion. For Riley, Joy runs the ship. For her mother (Diane Lane), Sadness is in charge; Dad’s (Kyle MacLachlan) emotions move to the beat of Anger.

In the real world, the story is that Riley and her parents have moved from Minnesota to San Francisco, a huge change for an 11-year-old girl to handle. Riley loses her friends, is thrust into a new school, has to deal with entirely new situations, and misses everything about her old life. Moved by decisions that are not fully under her control (more on that in a minute), Riley decides that the only way to be happy is to run away and return to Minnesota.

Of course, this is almost a sub-plot of the actual story. The majority of the movie takes place inside Riley’s brain. For years, Joy has hogged the controls, and all of Riley’s core memories, the ones that power specific aspects of her personality, are happy ones. After the move, we discover that Sadness can pick up these memories (that appear as little spheres) and convert them into sad ones, and that once this change happens, it can’t go back. An event on the first day of school causes a new core memory, a sad one, which Joy tries to block from entering Riley’s personality. As a result, chaos reigns for a few moments, and in the confusion, Joy, Sadness, and all of Riley’s core memories are send to long term storage. This means that for the moment, Riley cannot access aspects of her core personality, and that she can no longer experience two of her core emotions.

So, the main story is the attempt of Joy and Sadness to make it back to the control room through the various aspects of Riley’s brain. While this happens, parts of Riley’s personality stop working and collapse since they cannot be accessed. Joy and Sadness wander through lo ng-term memory, deal with different aspects of memory storage, and encounter Bing Bong (Richard Kind), Riley’s imaginary friend, who has been forgotten and left to wander around on his own. And, of course, we have to discover that perhaps Joy has been wrong about the value of Sadness the whole time.

There are some very clever moments here. Inside Out offers reasons why we forget things and why there are certain things we will never forget. A recurring gum commercial jingle pops up at inappropriate times as an explanation for unwanted random thoughts that seem meaningless but will not fade. Dream production is handled by a movie studio. There are also some great little in-jokes, like a factory that produces imaginary boyfriends who claim that they will die for Riley and who live in Canada.

So why is this mid-tier Pixar? There are a few reasons. One is the idea itself. Pixar has a history of taking old ideas (toys actually being alive, monsters in the closet) and breathing new life into them. In this case, though, Inside Out feels really derivative of the early-‘90s sitcom Herman’s Head, in which all of the life events and decisions of a guy named Herman are controlled by four aspects of his personality, all of which live in an anthropomorphized version of his brain. Inside Out feels more derivative than it should because of that.

Another is the character of Joy, who is absolutely the main character. Joy, for all of her good intentions, is not a very nice character. She’s rude and dismissive of everyone else, especially Sadness. Sure, we get the realization moment and the happy ending, but I found her to be a genuinely unpleasant character through most of the film. I’m not alone in that; my daughter’s main reaction to the film was, “I don’t like Joy.”

But hey, it’s Pixar. It will almost certainly be nominated for Best Animated Feature (although there’s always a chance it won’t, as with The LEGO Movie) and has a good chance of winning because, well, it’s Pixar. Mid-range Pixar is still better than most, but because it’s mid-range Pixar, it does feel like a letdown.

Why to watch Inside Out: It’s Pixar!
Why not to watch: It’s only moderately-good Pixar.