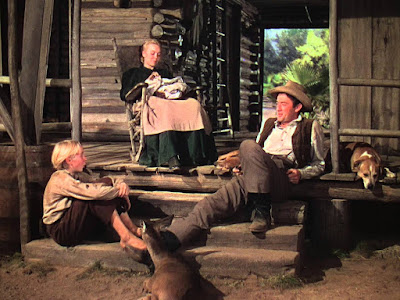 The Yearling is a coming of age story about a young boy living in the Florida wilderness with his parents. Pretty much since this blog has started, I’ve made the observation that coming of age stories come in only two varieties. When it’s a story about a girl, the coming of age happens specifically when she gets introduced to sex, often at the hands of an older man, and sometimes against her will. For girls, it’s all about procreation. When it’s a story about a boy, coming of age happens when the boy in question faces up to his own mortality. This means something has to die before the film ends. Since The Yearling is about the boy adopting a young fawn, it’s not difficult to figure out what’s going to happen.

Okay, that’s a spoiler, but only if you’ve never seen a movie before. Make a movie about a young boy becoming attached to an animal, and there’s pretty much only one place to go. What’s different here is that in The Yearling, the animal in question doesn’t show up for the first hour of the film. Instead, the first hour is more or less set up, bringing us into the world of the Baxter family. The Baxters are headed by Civil War veteran Ezra (Gregory Peck), who is nicknamed Penny. He is married to Orry (Jane Wyman), and the two are the parents of Jody (Claude Jarman Jr.). Penny and Jody are good friends, but Orry is distant, especially to Jody. It comes out in the first hour that Orry’s emotional distance is likely caused by the deaths of three of her four children. It’s her assumption that if she stays distant with Jody, either he won’t die or that if he does, she won’t be affected by it.

What Jody really wants is a pet, something that Orry refuses to let him have. In this respect, Jody is jealous of his friend Fodderwing (Donn Gift). Fodderwing lives with his family, headed by Buck Forrester (Chill Wills). Fodderwing is “crookety” in both body and mind. He walks with a crutch because he once decided that he could fly and injured himself. In modern parlance, Fodderwing is borderline schizophrenic, seeing ghosts and Spanish soldiers all around the Florida island.

There’s some ill will between the Forresters and the Baxters caused by a trade that went poorly for one of the Forresters and a fight in the local town in which Penny and Jody took sides against them. The Forresters steal the Baxters’ pigs, and in an effort to retrieve them. Penny is bitten by a rattlesnake. He shoots a deer and uses the heart and liver to draw out the poison. This leaves the doe’s baby without a mother, and Penny (in his weakened condition) allows Jody to adopt the fawn for his own. Getting to here takes literally the first half of the film; Jody doesn’t get the fawn until there’s only about an hour left.

Much of the rest of the film is spent dealing with Jody’s life turning to shit, with the fawn being only partly responsible. The first blow lands when Jody goes to see Fodderwing to help him name the fawn, since Fodderwing is just looney enough to come up with a suitable name. However, when Jody goes to see his friend, he discovers that Fodderwing has died of a mystery illness, but is told that Fodderwing would have named a pet fawn Flag. Blow number two lands when his friend Oliver (Jeff York) gets married and moves away to Boston.

But, as expected, the killing blow for Jody is the problems that stem from Flag. The Baxters have been saving money for improvements around the house. The chosen method is raising cash crops like tobacco and cotton. But Flag tramples the tobacco crop and eats the family corn crop, which means it’s time for the shotgun to come out. C’mon…you know it’s coming.

The Yearling was nominated for seven Oscars and won for color cinematography and color interior set design. The other nominations included ones for Best Picture, Director, Actor, and Actress. I get most of these nominations, actually. While this probably wouldn’t make my list of Best Picture nominees, I get completely why it would’ve been nominated for 1946. I like Gregory Peck in this as well, but that’s hardly a surprise since I tend to like Gregory Peck in general. There’s something easy-going about him in this, and I love his relationship with Jody. There’s a touch of Atticus Finch in this performance. What’s really shocking is just how damn young he looks in this.

It’s Jane Wyman that gives me pause here. Orry is an unpleasant character by design, but I’m not sold on her performance, either. She pays off at the end of the film; in a real sense, the film is about the relationship between Jody and Orry. But she’s not in it enough for it to really feel like a Best Actress performance. If I had to guess, she earned her nomination for the last couple of minutes, and it’s in those few minutes that I can almost see the nomination being earned.

The biggest problem with The Yearling is that from the moment Flag appears, the third act is already decided. It’s hard not to know where we’re going to get to by the end here, and because of this, the emotional beating we’re supposed to take loses a great deal of its impact. That may not be the fault of the film, but it’s a reality that can’t be avoided, just like the fate of Flag.

Two last things—I was watching this and my wife walked in. I told her that she probably wouldn’t want to be watching the film 25 minutes later. I was off by two minutes; it was 27 minutes later when the guaranteed event happened. Predictability, thy name is classic film. Second, today is the birthday of my older daughter, who is right about the age where girls come of age in film. In part, I watched this today because of her birthday, but I’m guessing you’ll understand that I’d rather not think about girls’ coming of age films based on what they usually involve.

Why to watch The Yearling: Gregory Peck and gorgeous scenery.
Why not to watch: Unless you’ve never ever seen a movie before, it’s not hard to see where this is going.