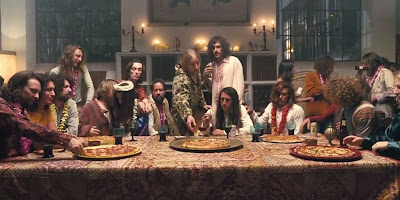 I knew that Inherent Vice was going to be trouble. I’ve read a little Thomas Pynchon and he’s not an easy author to understand. I knew there would be shades of Naked Lunch here since Pynchon is pretty close to unadaptable. Inherent Vice at least has something like a plot, but it goes in a million directions at once. Since all of the characters are heavily drug fueled, there’s a sense of altered reality throughout. It’s impossible to really know what is going on and what might simply be paranoia. That’s a part all a part of Pynchon. Some of the paranoia is justified and some of it is just the drugs.

I’m not going to attempt much of a plot summary because I don’t know if I could come close to doing it justice. At its heart, Inherent Vice is a film noir told from the perspective of Larry “Doc” Sportello (Joaquin Phoenix), a pot-soaked private investigator given a trio of interlocked and intertwined cases. The first comes from Shasta (Katherine Waterston), Doc’s ex-girlfriend. Her boyfriend Mickey Wolfmann (Eric Roberts) is in trouble. Specifically, Wolfmann’s wife and her boyfriend want to have him committed so they can take his wealth created from housing developments.

The second case comes from Tariq Khalil (Michael K. Williams), an ex-con who wants Doc to track down a man named Glen Charlock. Charlock is a member of the Aryan Brotherhood who did time with Tariq. Now, Charlock is working as a bodyguard for Wolfmann. It’s not too long into the movie that Charlock winds up dead. The third case comes from Hope Harlingen (Jena Malone). Her husband Coy (Owen Wilson) is presumed dead but she has reason to believe that he’s still alive. While all of these cases swirl around, both Shasta and Mickey Wolfmann disappear.

There’s more, of course, all seen through Doc’s drug haze and narrated by Sortilege (Joanna Newsom), who is more or less Doc’s conscience. There are contract killers working for one government organization or another, a heroin cartel, a cult-like psychiatric clinic, a drugged out dentist (Martin Short), and alternate harassment and sympathy from an LAPD cop named “Bigfoot” Bjornsen (Josh Brolin). Throughout the running time, we’re never really sure how much of what is going on is real, how much of it is meaningless, and how much of it is simply a byproduct of the amount of pot Doc smokes over the course of the film.

In a way, Inherent Vice is like The Big Lebowski with fewer white Russians and a lot more mind-fuckery. This is absolutely a noir, but it’s narratively dense. Unlike a typical noir that starts simply and slowly builds in complexity, Inherent Vice starts weird, stays weird, and when it ends, we’re not really sure what just happened even if we are sure that something did. The story continues not to unravel but to build up scene by scene with no resolution of much of anything until the very end. New characters show up for a scene or two and then vanish or die. And no one seems to be what he or she actually claims to be.

Did I like Inherent Vice? I’m not sure. I respect it for what it tries to do, and I admit that I’m primed to appreciate the work of Paul Thomas Anderson. Like many of his past movies, he has assembled a solid and impressive cast, with many of these well-respected actors having roles over only a couple of scenes. Anderson has that kind of clout, which makes this more impressive. Equally impressive are Joaquin Phoenix’s sideburns, which looks like he stole them from Neil Young circa 1968.

I don’t think that I can recommend Inherent Vice in good conscience. I think it’s an impressive piece of work, and had I the desire and wherewithal to do it, it’s a film that would warrant multiple rewatches and would almost certainly reward such careful attention. But I’m also not sure that the amount of times I would need to rewatch this film would repay me enough to make it worth my time. As much as this is a film that needs study, I think it might be one-and-done for me. There’s only so much of someone trying to crack open my skull that I’m willing to take.

If you’re into chemical alteration of your senses, that might be the way to go with this. I’m not, so that avenue is forever closed to me. Your mileage may vary.

Why to watch Inherent Vice: It’s the first attempt to adapt Pynchon for the screen.
Why not to watch: It’s as confusing as Pynchon’s books.

Posted by SJHoneywell at 1:09 PM