Film: My Beautiful Laundrette
Format: DVD from NetFlix on laptop. 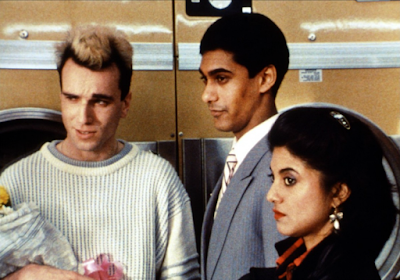 One of the things I love about having this as a hobby is that every now and then I come across a movie that is substantially ahead of its time in one respect or another. Such is the case with My Beautiful Laundrette. A 1986 movie that features a homosexual romance would normally be about that romance. That’s not the case here. It’s certainly a part of the story, but this is a film that is much more about racism in Thatcher’s Britain. It was refreshing to see a film that didn’t specifically focus on what would even today often be the central idea.

The other noteworthy thing about My Beautiful Laundrette is that it’s one of the breakout roles for Daniel Day-Lewis. According to IMDB, this movie was released on the same day as A Room with a View in New York, and featured Day-Lewis in two completely opposite roles. In A Room with a View, he plays an upper class, emotionally stifled man while in My Beautiful Laundrette he is a working-class gay former skinhead. Shades of the man’s talents to come, no?

Johnny (Day-Lewis) is a former skinhead living on the dole and getting into trouble. Omar (Gordon Warnecke) is Pakistani and is also on the dole and living with his father (Roshan Seth), who is a former socialist journalist fallen into poverty and disrepute. Things change from Omar because of the intervention of his uncle Nasser (Saeed Jaffrey), a successful businessman. Omar starts washing cars, but is soon transferred to working in Nasser’s laundromat. Nasser’s initial intent is to have Omar clean the place, but Omar has decided to have a bit more ambition and asks to run the place as the manager.

Omar is more or less taken into Nasser’s family with implications that he will eventually marry Tania (Rita Wolf), Nasser’s daughter. Around this same time, Omar meets up with Johnny, who he knew at school. The two had a relationship in school, and it’s evident that there is still something between them. Omar hires Johnny to help him rebuild the laundromat, something that Johnny’s other friends object to. Part of that objection is working in general, but for them the situation is made much more serious because Omar is Pakistani and the laundromat is owned by Nasser, who is also Pakistani.

There are several moments of racial tension running through the film. Nasser, for instance, has a white mistress named Rachel (Shirley Anne Field) almost as a status symbol. Also thrown in the mix is Salim (Derrick Branche) who makes his living selling drugs and who runs afoul of Johnny at several points. There are sexual tensions between Omar and Tania, between Johnny and Tania, and between Omar and Johnny. Additionally, there are economic differences. Nasser has embraced the idea of capitalism and strives for money while Omar’s father continues to press for his socialist ideals despite them having failed him, particularly in Thatcher-run Britain.

As mentioned at the top of this review, the most exceptional thing about My Beautiful Laundrette is that it is not a movie about a gay relationship. It is instead about a relationship that happens to be a homosexual one. It would be exceptional in a lot of ways were this film to come out today, but having it come out 30 years ago is almost shocking.

There’s a lot to like here. Daniel Day-Lewis is almost always worth watching for starters, but I also like seen Saeed Jaffrey and Roshan Seth, both of whom are immediately recognizable and are always excellent. The main sell here, though, is the script. There’s a staggering amount of tension in this movie, and there is really only one place where that tension comes specifically from the relationship between Omar and Johnny, and it’s also quick and soon avoided by some quick thinking from Omar.

I also really like the ending. I don’t want to spoil it because it really is worth seeing, but I also want to discuss it at least a little. There are a lot of ways this could end, and it threatens to end in a bunch of different ways in the last 10-15 minutes. Where it ends, though, is satisfying, and it gets there completely honestly. Those last 10 minutes see a lot of loose ends tied up, and they all work. Instead of cheating to get somewhere in particular, it gets to where it wants in a way that works with everything that has come before. That’s good screenwriting.

If there’s a down here, it’s that Daniel Day-Lewis frequently outclasses Gordon Warnecke. Warnecke is often able to get himself close to Day-Lewis’s level, but frequently doesn’t pull his own weight in a scene. This also happens at times when he’s on screen with Roshan Seth or Saeed Jaffrey.

I knew nothing about this going in; in fact, I didn’t even know that this was one of Daniel Day-Lewis’s first important roles. I am very happy to have seen it.

Why to watch My Beautiful Laundrette: A most unusual love story.
Why not to watch: There are moments when you can tell that Daniel Day-Lewis outclasses most of the rest of the cast.