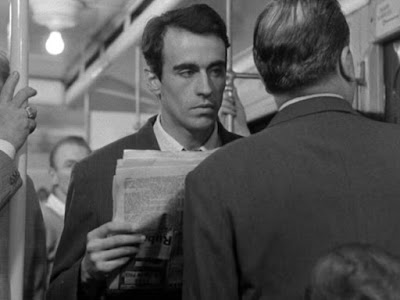 I have almost no complaints about the nominations for this year in this category. No, really. The only movie I can think of that might belong here as an original screenplay is Pickpocket. Every other movie I considered as being a snub turned out to instead be an adapted screenplay. So, kudos to the Academy. That doesn’t happen very often. Incidentally, I realize this is also the year of release for Plan 9 from Outer Space. However, if you honestly think that deserved a nomination, you should probably find another blog.

5. Operation Petticoat is a cute movie and it’s entertaining, but if there’s one film that shouldn’t be on this list, it’s this one. Part of the problem is that I’m not sure that Operation Petticoat knows what it wants to be. Is it a war film? A goofy romance? A comedy? It’s kind of all of them, and because of that, it’s also kind of none of them. I like it just fine, but Pickpocket would have been a much better choice for this list.

4. Eventual winner Pillow Talk suffers from problems different than Operation Petticoat. The biggest issue here is that the film is just so damn fluffy that it’s difficult to take seriously. It’s a comedy, so “serious” isn’t necessarily the goal. There’s a lot of cliché here, though, since the movie is based entirely on the idea that the best way to win a woman’s heart is to lie to her about who you are. Good dialogue helps, but it doesn’t completely cover the fact that too much of this comes off as retread.

3: I’ll no doubt take some grief for sticking The 400 Blows in third place, but I’ll stand by it. There’s some good subtext in this film and it’s worth watching, but there’s a part of me that is almost always a little disappointed by the work of Francois Truffaut. I generally want to like his work more than I actually end up liking it. This is a good movie and it’s one that is absolutely worth watching. It just doesn’t have as much for me as the other two movies on the list.

2: When I started this project more than five years ago, I knew pretty much nothing about Bergman beyond the fact that he was Swedish. Now I consider myself a fan. Wild Strawberries is an interesting film in that it deals simply with the life and memories of an old man, but it also touches on areas much more akin to the typical horror film. This is a dense film worth seeing multiple times. I like other Bergman films better, but this one might be the most narratively dense under the surface, and that’s worth exploring.

1: There should be no shock here that I’m picking North by Northwest; it is my favorite movie, after all. But it’s also one that I can justify in terms of the screenplay. Cary Grant’s other nominated picture in this category in this year is Operation Petticoat, a film that wants to be too many things and ends up being none of them. North by Northwest has similar ambitions. It’s a thriller, a romance, a spy movie, and even a comedy, and it all works and blends seamlessly. This is Hitchcock at his best, and at his best in part because he had such a great starting point. No shock for regular readers, but this one was a no-brainer.

Posted by SJHoneywell at 1:34 PM