This is the seventh in a series of twelve films suggested by the guys at YourFace. This is Jason’s third pick. 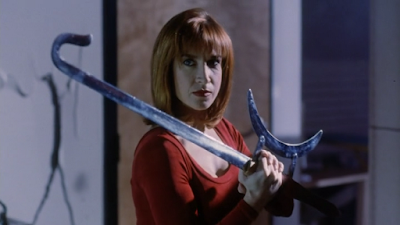 When I took on watching movies picked by the Your Face crew I knew there would be movies that were more difficult than others. I won’t lie; I was more scared of Jason’s picks than of Nick’s or Nolahn’s. Jason and I operate in very different ends of the cinematic swimming pool. We both dredge up some rarities now and then, but that’s really where similarities stop. Where I concern myself with Oscar nominees, Jason tends to look more favorably on those films that are forgotten for a reason. So it is that Jason awarded me with Undefeatable. At less than 10 minutes in, I wondered exactly what I had done to make Jason this mad at me.

Undefeatable comes right in the heart of the career of Cynthia Rothrock, pint-sized cinematic asskicker who is long on martial arts skills and short on acting talent. That said, she’s Meryl Streep compared with the rest of this cast. Like plenty of martial arts films of the era, Undefeatable operates only because of a plot that absolutely defies description and believability. Seriously, I’ve watched some really dumb movies in my time, but Undefeatable has one of the dumbest premises ever.

Strap in; this is going to get mind straining very quickly. We start in the world of underground kickboxing because of course there’s a world of underground kickboxing. We see a guy named Stingray (Don Niam) beat the snot out of another guy, presumably killing him. Quick cut to a street scene where we see Kristi Jones (Rothrock) walking with a gang of street thugs. See, she gets into street fights for money so that she can pay for the college tuition of her sister Karen (Sunny David). No, really. She wins a fight (easily, really), but gets busted by Nick DiMarco (John Miller) and his partner Mike (Gerald Klein), who are shown breaking up a robbery and who are also kind of hard to distinguish from each other.

Anyway, Stingray comes home from his fight and rapes his wife Anna (Emille Davazac) to a softcore porn soundtrack, then has another fight set up for him. When he comes home from that meeting, he discovers that Anna has left (she has left him the most dispassionate “you’re a creepy rapist” letter ever), which causes him to have a psychotic break because of abandonment issues he had as a child. So now, martial arts-fueled Stingray goes on a kung fu rape binge, kidnapping, raping, and murdering women who look vaguely like his wife. Oh, and he also gouges out his victims’ eyes and keeps them in a fish tank. It’s all very pop psychology. And, of course, Kristi’s sister Karen looks a lot like Anna, so she becomes one of his victims, thus fueling the ass kicking bonanza to come.

The last character that needs to be mentioned is Jennifer Simmons (Donna Jason), Karen’s psychology teacher (plot point!) and a potential victim for Stingray. In fact, she gets kidnapped twice, because there is no action/martial arts/cheap thriller cliché that Undefeatable will not mine. Did you guess that one of the cops gets killed? Did you guess that it’s the one whose last name is only mentioned once? Would you be surprised that Kristi and Nick start to fall for each other, and suddenly she becomes an invaluable member of the investigation? Of course you wouldn’t.

The reason that Jason wanted me to watch this (I can only presume) is the ending three-way fight scene that pits Kristi and Nick against Stingray. This was put up on YouTube almost a decade ago and has garnered more than 11 million views. At least one of those views was mine, something I realized a few seconds in. It’s one of those legendary bad movie scenes that needs to be witnessed to be believed.

Here’s the thing. I know why Jason loves movies like this. I understand that Jason is exactly the sort of guy who will watch 90 minutes of shit for a few seconds of something ridiculously funny. I really do get it, but I’m not that guy.

And don’t get me wrong, there are some things here that are really funny and stupid. Cynthia Rothrock’s second street battle comes against a guy who wears football shoulder pads for no apparent reason. The rules of these street fights are that your hands can’t touch the ground, and yet as the fight starts, he puts his hand down on the ground in a lineman’s stance. The other thing is that the street fights pay in the hundreds or thousands of dollars…but there are like a dozen spectators at each one. Evidently, the guy running the fights just likes paying a lot of money to see people get beat up. Kidnappings and beat downs happen in broad daylight in business districts with people driving past.

And the clichés…oh, man, the clichés. There isn’t a fight that doesn’t start with flexing and posturing. The guys seem to always end up shirtless during fights and Stingray in particular looks like half-cooked bacon. There’s lots of poufy hair on the men and the women (Stingray is shown using hairspray when he has his psychotic break), and there’s not a moment of film that doesn’t feature an overblown and overbearing soundtrack heavy on the synth and single chords played for 30 seconds at a time. There’s also plenty of sped up film. I also love that Nick the cop drives a big-ass Cadillac and always seems to show up wherever Kristi is fighting. Oh, and everybody, everybody knows martial arts, including the psychology teacher. There’s even a moment where Stingray wipes blood off his face and then licks it. He licks blood off a knife at one point, too.

Undefeatable is an intensely stupid movie. Some of the fighting scenes are entertaining, but this is a really awful film all the way around. I won’t talk shit about Cynthia Rothrock’s asskicking skills or her signature coup de grace that always ends with her doing the splits. She was, after all, an undefeated kickboxing champion for five years. But this movie is really, really shitty.

Why to watch Undefeatable: Pure ‘80s-style martial arts ridiculousness (even though it’s from ’93).
Why not to watch: “Ridiculousness” is pretty much the operative word in all aspects of this film.