It's a Man's World 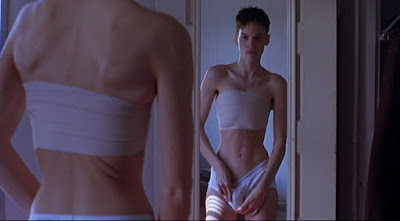 Someone needs to explain Hilary Swank’s career to me. If memory serves, Boys Don’t Cry is the sixth of her films that I have seen. The two of them that follow the naming pattern of The [Noun] (The Reaping, The Core) are utter shit. The four that don’t (Boys Don’t Cry, Insomnia, 11:14, and Million Dollar Baby) are films that I’ve either liked or at least appreciated. Swank has won two Oscars; she’s obviously got talent. But man, does she pick some truly shit movies sometimes. Maybe she should just stick to dramas and avoid anything that delves into science fiction or horror.

It’s interesting to me that Boys Don’t Cry, the story of a transsexual named Teena Brandon, who has changed her name to Brandon Teena (Swank) who falls in love with Lana Tisdel (Chloe Sevigny) and ends up killed was released less than a decade before Transamerica and Brokeback Mountain. How quickly the discourse changes regarding transsexuality. Mind you, I’m not complaining. Where Transamerica turned out to be in many ways triumphant and accepting of its characters, Boys Don’t Cry is a brutal story of rejection, pain, and various gender and sexual phobias. I have no doubt that while the national and international conversation has changed, that there are large swaths of this country and the world that react far closer to the people in Boys Don’t Cry. This is still a reality for many people, and Boys Don’t Cry is thus still relevant.

Anyway, Brandon, genitalia aside, considers himself male and acts male. He gets into fights and likes to pick up girls in bars. The problem is that this is not the present day and not somewhere like New York. Instead, this is the early 1990s and Nebraska, where such behavior is acceptable in young men, but not in transsexual men like Brandon. After a few run-ins in Lincoln, Brandon’s cousin kicks him out and Brandon winds up in Falls City, Nebraska, which has even more provincial views than Lincoln. It is here where Brandon falls in with a group who become important to him. Primary among these people is Lana Tisdel. Sadly, Lana is not the only person in this group. Also involved are John Lotter (Peter Sarsgaard) and Tom Nissen (Brendan Sexton III), who aren’t particularly tolerant when it comes to sexuality.

This problem is exacerbated by two facts. First is that Lana soon becomes attracted to Brandon, not knowing that Brandon is still physically female. Second is that John is also attracted to Lana, is protective of her, and certainly won’t accept that someone who is physically a woman has stepped into the role he would like to occupy.

Boys Don’t Cry is less a movie than it is an ordeal. This isn’t a film that is going to end well, and that’s something that we seem to know intuitively from the first few minutes. This is not to say that it’s not a good, even great film, or one that isn’t important. It’s just not something most people would call entertaining.

This is absolutely Swank’s film. If there is a weakness in her performance as Brandon, it’s just that she doesn’t really look male no matter how short her hair is cut or how many compression bandages she wraps around her chest. That’s hardly her fault. At best, she looks like a very effeminate boy, and even that’s a stretch in most cases. Everything else about her performance shows the sort of promise that got her a nomination and her first Oscar. The other two performances of note here are Chloe Sevigny and Jeannetta Arnette, who plays Lana’s mother. I’m not a Chloe Sevigny fan by any measure—when I see her, I think of the spoof videos on YouTube (see below), but I can’t fault her Best Supporting Actress nomination here. Arnette has only a few scenes, but takes them for all they are worth.

What really works here, though, is that Boys Don’t Cry is essentially a love story between Brandon and Lana. It’s a tragic love story, no doubt, but that is what is at the heart of the film, and that is why we keep watching. In this respect, it’s not really that different from Brokeback Mountain.

I know this is less than I normally say about the films that I review. There’s not anything more that needs to be said.

Why to watch Boys Don’t Cry: When Hilary Swank chooses a script well, she really chooses well.
Why not to watch: If you’re pissed off about a particular recent Supreme Court ruling, you may end up rooting for the wrong people.