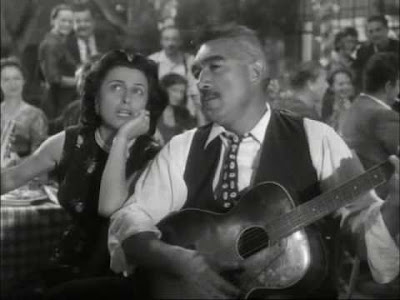 I’ve played around a little bit with Amazon Prime, but I haven’t used it much. It’s something my wife got a subscription to, and she and my kids use it pretty frequently. Me, not so much. There are maybe a dozen and a half movies on my Oscar list that I can only find on Amazon Prime, though. I’m loathe to watch them, since sometimes those movies eventually show up somewhere else and I can watch them for free. Then again, movies like Wild is the Wind sometimes show up on Amazon Prime for free and I can watch without concern about the additional cost.

Wild is the Wind is one of those films that can be summed up in a sentence or two. A Nevada sheep rancher named Gino (Anthony Quinn) misses his late wife terribly, so he sends to Italy for her sister Gioia (Anna Magnani) to marry her. There is some initial tension after she arrives, and much more tension later when Gioia falls in love with Gino’s adopted son Bene (Anthony Franciosa) instead of her husband. Sparks fly, there are wild horses, and passions run high.

There are other people involved, of courses. Gino’s daughter Angela (Dolores Hart) appears in a few scenes, as does Gino’s brother Alberto (Joseph Calleia). But really, the entire film rests on the triangle created by Gino, Gioia, and Bene. It also takes a long time to get started, at least in terms of anything like a romance from anyone involved. There’s some indication that Gino wants Bene to marry his daughter, a fact that causes some tension in several scenes, but even this feels like something tacked on to ramp up what tension is already created by the main situation.

There is also a metaphor that runs through the film. Gino’s land is expansive and includes a herd of wild horses. To Gino, they are pests and need to be exterminated, but Gioia finds beauty in the horses and wants them to live. She also wants one of the horses for herself, and Gino eventually complies and breaks the horse for her to ride. But as soon as she gets the horse and the horse is tamed, she realizes that it was a mistake, telling Gino that he had captured a horse for her, but given her a sheep. She was attracted much more to the horse’s freedom and power, it seems, than to the animal itself. This is nicely done, because while it’s certainly evident that there’s metaphor at work here, it’s played in such a way that the meaning isn’t on the surface. It’s matched by an early scene where Gioia unhooks a dog from its leash, allowing it to run free as well.

That, even more than the love triangle, is what this film is about. Gino treats Gioia and pretty much everyone else as objects in his possession. He even calls Gioia by the name of her sister (his late wife) and then can’t understand why she would be upset by this. When Bene, realizing that his love for Gioia will cause destruction on the family, tries to leave, Gino entreats him to stay specifically by offering to buy him anything he wants. And as Gioia shows us throughout the film, what she really wants is to be free to be herself, even if that means scrubbing her own kitchen floor.

Since Gioia is central to what the film is really about, it is Anna Magnani who carries the film on her back, and she does this ably. Magnani has a fascinating face. She was one of those rare actresses who could be sublimely beautiful in one moment and then, with a simple change of expression or a turn of her head, look haggard in the next. It’s an effect used beautifully here, and it’s matched by her ability to switch emotional gears immediately and effortlessly not just in the same scene but in the middle of a single sentence. She, more than any other reason, is why this film is worth watching.

I hate to say this because I tend to like Anthony Quinn, but his performance here is more blustery than I like. I’m certain that Gino is written as a blowhard and that Quinn’s work is exactly what George Cukor wanted. But he’s a hard man to like. There’s a redemption moment in the closing scene of the film that works very well. In fact, the scene pays off specifically because of how Quinn has played Gino for the first 90 minutes or so of the film. Still, this is a man who experiences all of his emotions at a full gallop all the time. In a sense, he’s doing the same thing that Anna Magnani is, but without her subtlety. Anthony Franciosa is good, but nothing exceptional here.

This is a slow film. Not a lot happens in terms of the romance for the first hour or so, and ultimately, that romance between Gioia and Bene feels like something that simply drives the final act. I’m really not sure it was necessary. Gioia trying to find her own way in a new country and with a new family really was enough, and the personality clash between what she wants and what Gino wants her to be was a lot more interesting than the romance.

Why to watch Wild is the Wind: Anna Magnani.
Why not to watch: Not a great deal happens for most of it.