Paint Me a Picture 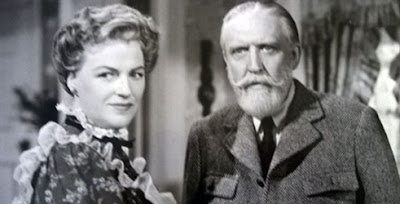 If you think of a proper English gentleman from the ‘30s and ‘40s, you’re thinking of Monty Wooley. This is true if you know who Monty Wooley is or you’ve never heard the name mentioned before. I mean, look at that mustache in the picture above. Wooley made his living as a light comic actor in films that weren’t really laugh-out-loud funny but more sweet and charming, generally with Wooley playing a crusty old man who actually has a heart of gold underneath his imperiousness and blustering. He's the angry version of Edmund Gwenn. Such is very much the case with Holy Matrimony.

Priam Farll (Wooley) is an acclaimed painter who is also a notorious recluse. For a quarter of a century, Priam has moved from remote location to remote location accompanied only by Henry Leek (Eric Blore), his manservant. So, while Priam happily paints away, Henry handles the day to day affairs. These 25 years of happiness come to a sudden end in 1905 when Priam is summoned back to England to be knighted, a ceremony he takes in poor grace.

Sadly, the trip proves to be too much for Henry, and soon after the pair arrives in London and reopen Priam’s old house, Henry succumbs to double pneumonia. This becomes a windfall for Priam when the doctor believes that the dead man is in fact the famous painter and that Priam is the manservant. Suddenly believing that he will be free from the unwanted attentions of fans and art patrons, Priam goes along with the idea, claiming to be Henry Leek and claiming that the departed Henry is Priam Farll. This sudden joy turns to sadness when he realizes that the body of his late manservant is to be given the highest honor: burial in Westminster.

Following the funeral, Priam encounters Miss Alice Chalice (Gracie Fields), a woman who had been corresponding with Henry and had arranged to meet him. It is soon evident that Alice was looking for a husband, and, happy to be back in London and anonymous, Priam obliges under the name of his dead servant. An encounter with Henry’s actual wife (Una O’Connor) is deftly handled by Alice and the pair experience a few years of wedded bliss, thanks to “Henry’s” stipend from Priam’s will. All goes well until Alice’s investments turn sour, leaving the couple broke and starting to become desperate. Worse, when Priam tries to sell some of his own valuable artwork, he is offered pennies for it since to the world, Priam Farll is dead.

Things get more interesting when Alice starts selling his paintings for a pittance to an art dealer named Oxford (Laird Cregar), who has in turn been selling them for a massive profit, buying at 20 pounds and selling at 2,000. When a new Farll painting shows up containing items that did not exist until after Farll’s alleged death, the lawsuits start flying. The real Priam Farll is uninterested in rescuing either the defendant or the plaintiff. Of course it all works out in the end. After all, this is 1943.

So, Holy Matrimony is a farce, but it’s an entertaining farce that is sold by the characters of Priam Farll and Alice Chalice. Monty Wooley appears to be playing the persona he developed, which is best thought of as W.C. Fields with the alcohol replaced by British indignation. He seems to dislike just about everybody in this film with the exception of Alice, who is capable of taking him in stride, matching him in terms of wit, and is willing to treat other people exactly the way he would treat them.

If there is a problem here, it’s that Holy Matrimony is ultimately pretty silly. This is a movie that could be easily solved early on with a couple of sentences spoken in the right place at the right time and the plot only really happens because of easily fixed misunderstandings. That’s at least true initially. Fortunately, after the first act, this problem goes away and the bulk of the film is taken up by problems that are specifically caused by Priam Farll being cantankerous.

I won’t lie: Holy Matrimony isn’t going to rewrite how movies are made and it’s never going to be considered an important piece of cinema. It is, though, pretty entertaining for what it is, and that comes from a snappy script handled perfectly by Monty Wooley and Gracie Fields. If you’re looking to be entertained for 90 minutes, you could do a lot worse.

Why to watch Holy Matrimony: Monty Wooley is a treasure.
Why not to watch: It’s all based on silliness.